The Canadian Football League has released its full 21-week schedule for the 2023 Season, culminating in the 110th Grey Cup in Hamilton on Sunday, November 19th.

In just over five months, the Roughriders will be back in Mosaic Stadium to host the B.C Lions for the preseason home game on Saturday, May 27th. The Riders will face the Lions three times during the regular season, on the road in B.C. Place twice and at Mosaic stadium on Sunday, August 20th.

After starting Week 1 on the road in Edmonton, the Roughriders Home Opener is on Friday, June 16th against the Winnipeg Blue Bombers. They face each other for three games during the season. The next matchup against the Bombers is the rivalry favourite 58th Labour Day Classic on Sunday, September 3rd.  The last regular season match is the rematch game the following week, on Saturday, September 9th at IG Field in Winnipeg. That will be the only home-and-home series for the Riders next season.

Sunday home games will increase to three next season. The first is on Sunday August 6th against the Ottawa Redblacks, the second is on Sunday, August 20th versus the B.C. Lions and the third is the Labour Day Classic against Winnipeg.

Overall, the home schedule including pre-season contains one Thursday game, two Friday games, four Saturday games, and three Sunday games. 7 out of 10 home games will be played on a weekend, making getting to games easier and have “family-friendly” start times of 5:00 p.m. or earlier.

Season tickets are already on sale and existing season ticket holders can renew at early bird prices. Season tickets include a savings off the regular game day price, tickets to a potential home playoff game, and bonus Rider Rewards points.

We are excited to offer the extremely popular MVP Plan for the 2023-2025 Seasons. This program has benefits reserved only for those who join this exciting three-year program. MVP Plan holders will receive an 18% discount off game day prices, a free Rider jersey with an exclusive MVP patch ($170 value with free shipping in Saskatchewan), and 10 coupons for 20% off at the Rider Store. Accounts with four or more seats will receive an additional free jersey.

Fans wishing to purchase season tickets for the 2023 season and join our MVP Plan can visit Riderville.com. If you are looking for a gift for the Rider fan in your life, check out the Holiday Packs – there is something for everyone on your list! Sign up for our eNews here to be notified when single-game tickets are available for purchase. 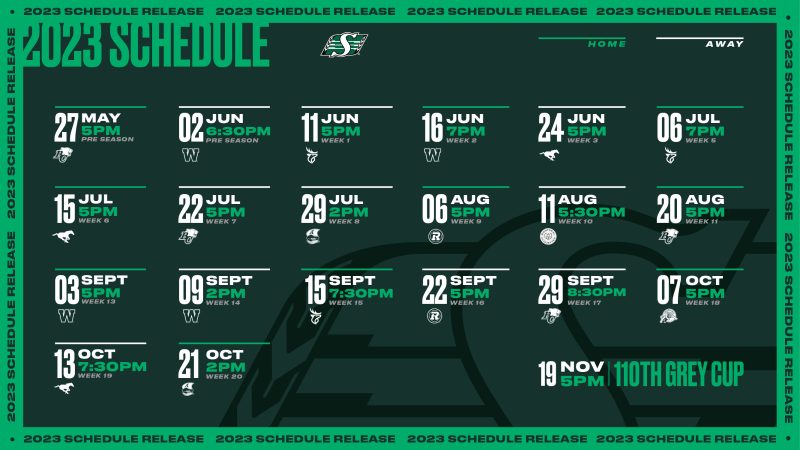