The next season, the team changed its colours to blue and white to match the Regina Amateur Athletic Association. A third colour change occurred in 1912, when the team changed to red and black — the colours it would keep for the next 36 years.

In 1924, the team changed its name from the Regina Rugby Club to the Regina Roughriders. Ottawa’s rugby club had been called the Rough Riders since the 1890s, but dropped it in favour of the “Senators” in 1924. Regina jumped at the chance to adopt the name “Roughriders.” 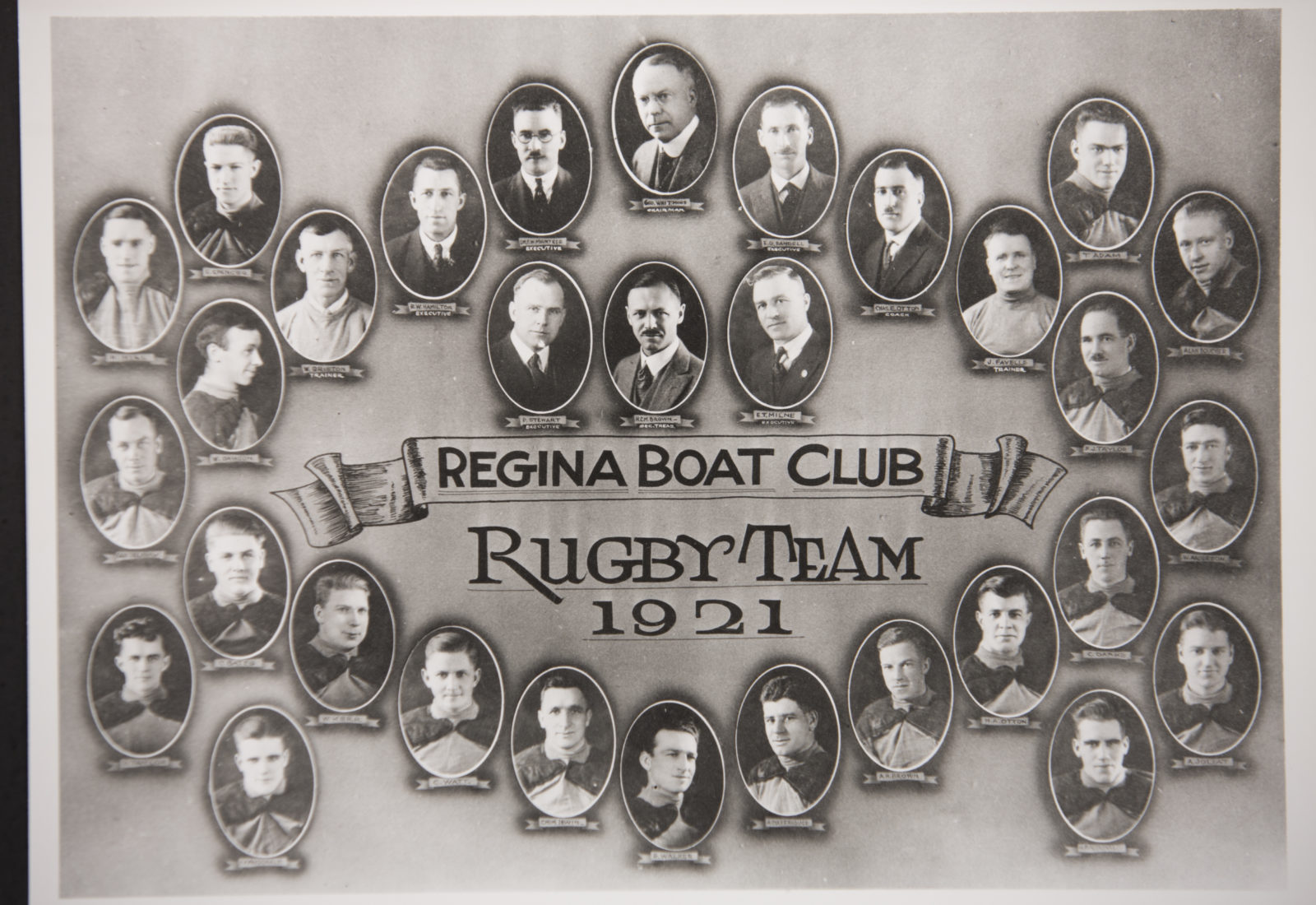 There are two theories on where the name “Roughriders” came from. One states that it derived from members of the North West Mounted Police who were called Roughriders because they broke the wild horses used by the force.

The other states there was a Canadian contingent that fought with Teddy Roosevelt in the Spanish-American War. Roosevelt’s troops became known as the Rough Riders. Following the war, the Canadian troops returned home, with some of them settling in Ottawa and the rest moving west. The colours worn by Roosevelt’s infantry were red and black.

Regina went 0-4-0 and was outscored 74-18 to finish second in the Western Canada Rugby Football Union standings in 1910. Regina then finished in first place in each of the next 22 seasons of competition and won 15 Western Canadian championships in that span.

In 1921, the national championship — the Grey Cup game — was played by teams from Eastern and Western Canada for the first time. The first nine Grey Cup games had been contested solely between teams from the east.

Regina played in its first Grey Cup game in 1923 but lost 54-0 to Queen’s University. That was the first of seven appearances in a span of 12 seasons for the Roughriders, who dropped all seven. 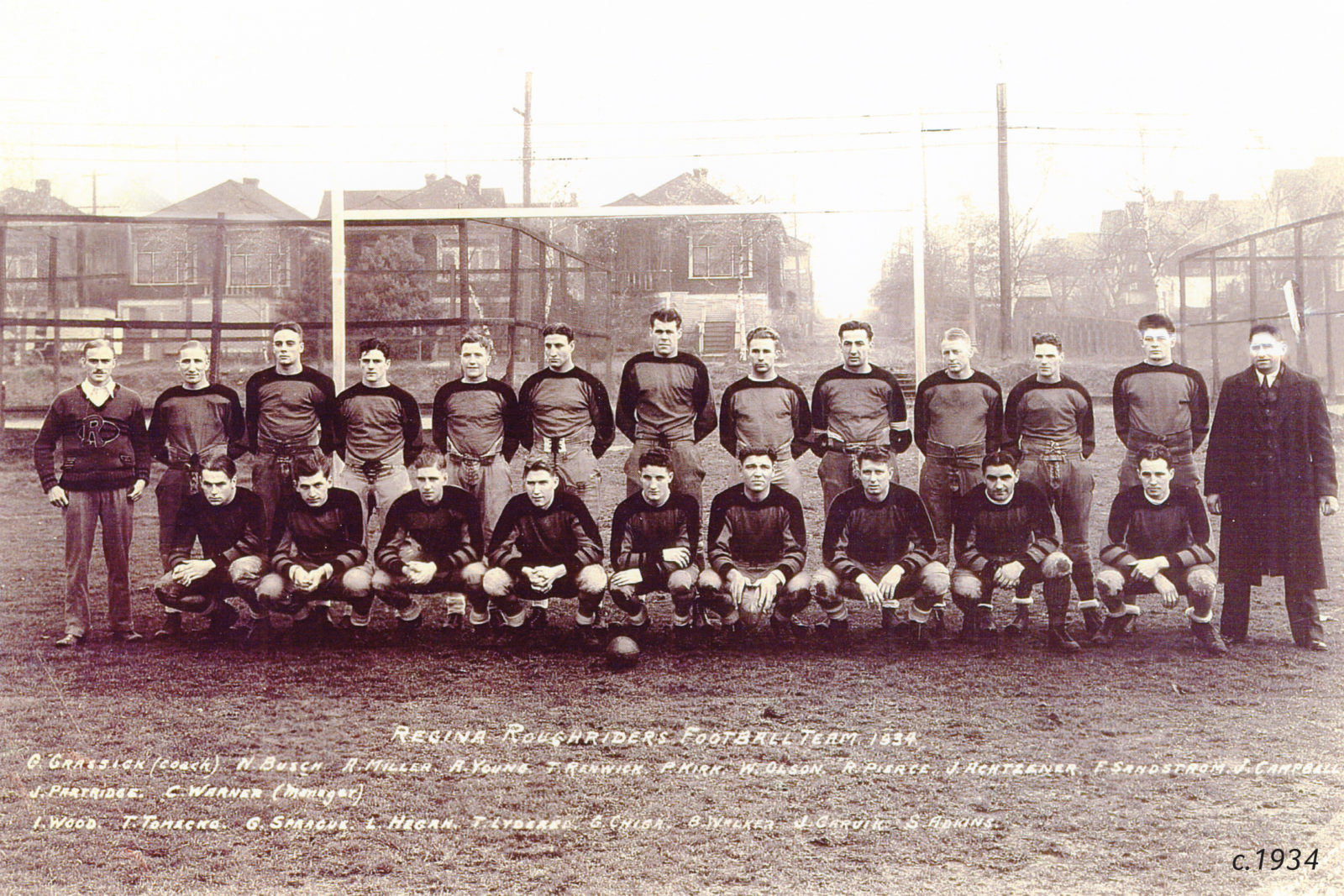 In 1936, Regina — citing a lack of suitable opposition in Saskatchewan — joined the Western Provincial Football Union. Regina won the league title that season.

A franchise milestone occurred in 1948, when clubs in Moose Jaw and Saskatoon folded. The Regina Roughriders became a provincially owned and operated club — and became the Saskatchewan Roughriders. 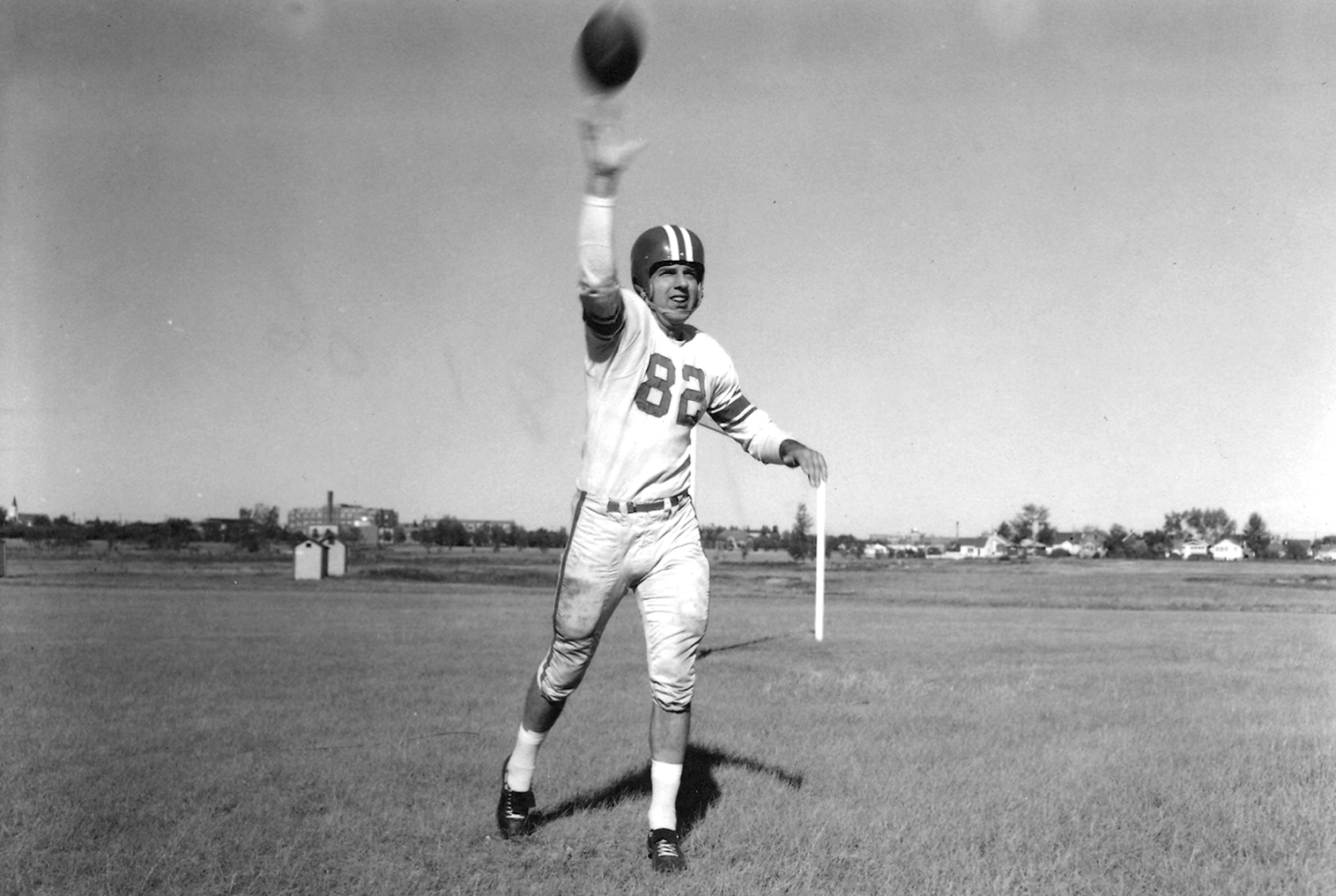 The team also changed its colours in 1948 to the familiar green and white. The Roughriders were in bad need of new uniforms, and when executive member Jack Fyffe found a set of green and white jerseys at a surplus store in Chicago, the “Green and White” was born.

Saskatchewan won its second WPFU title in 1951 and advanced to the Grey Cup. Unfortunately for the Roughriders, they lost the title game for the eighth time in as many appearances.

and Gordon Sturtridge (#73) were killed in a plane crash while returning from an all-star game in Vancouver.

Flight 810 crashed into Mount Slesse in the Coastal Mountains just south of Chilliwack, B.C., claiming the lives of all 62 people on board.

The four players’ uniforms are among the eight Roughriders numbers retired by the club. Ron Lancaster (#23), George Reed (#34), Roger Aldag (#44) and Dave Ridgway (#36) are the other players to have their numbers retired.

The Roughriders joined the Canadian Football League’s Western Football Conference in 1961, but had limited playoff success — until 1966. 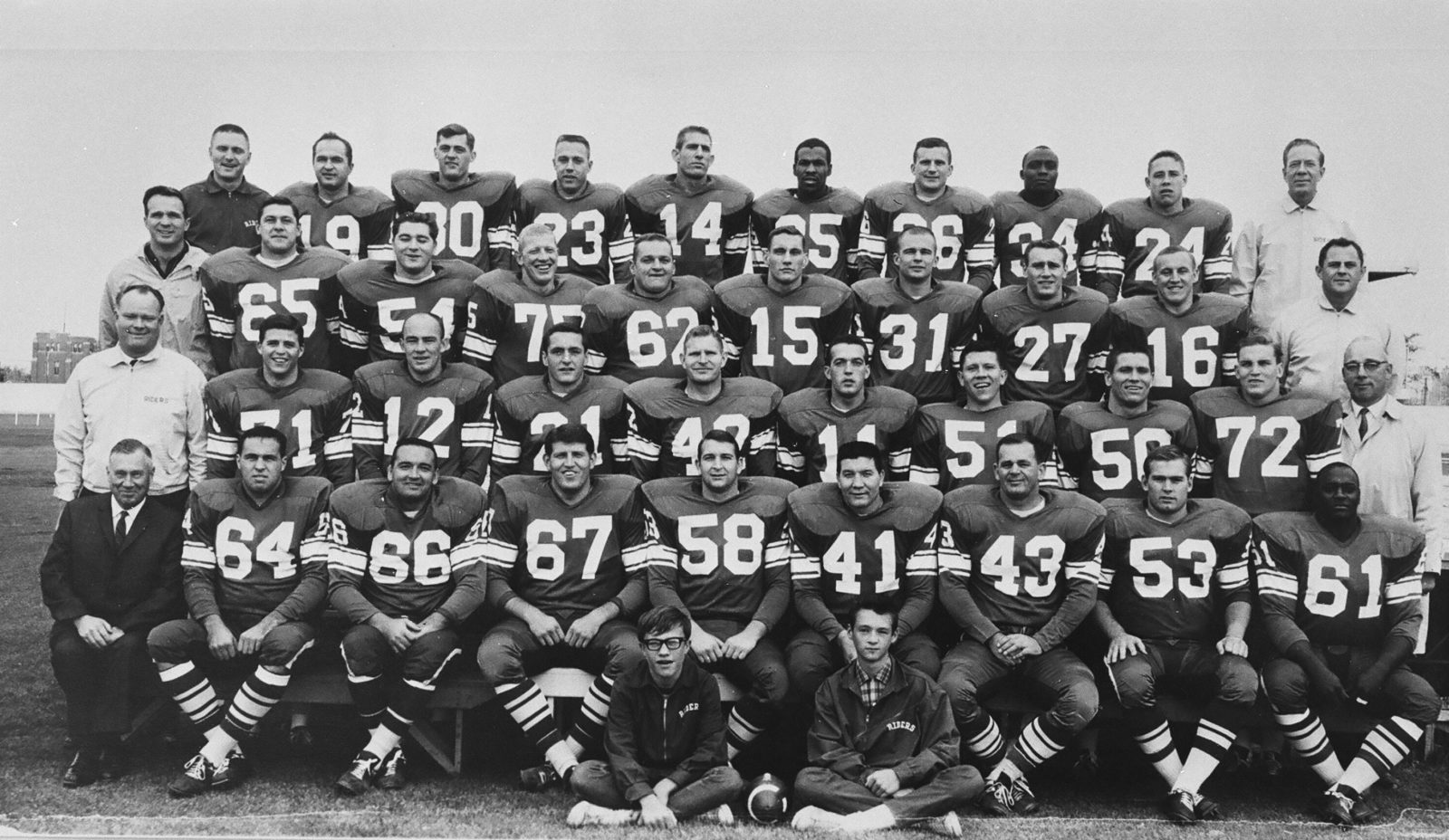 The Roughriders remained one of the top teams in the CFL for the next decade, qualifying for the post-season in every year. Despite that level of sustained success, Saskatchewan couldn’t win another Grey Cup; the Roughriders lost in the league final in 1967, ’69, ’72 and ’76. 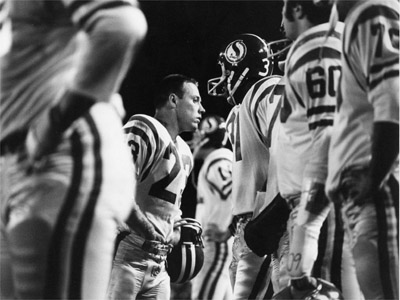 The team had some lean years during the late ’70s and early ’80s, with poor on-field performances leading to poor attendance. By 1987, the organization decided it was necessary to conduct a telethon to keep the team afloat.

With their finances in order, the Roughriders started to turn things around on the field. In 1989, Saskatchewan returned to the Grey Cup game — and the contest turned into arguably the best title game in CFL history. 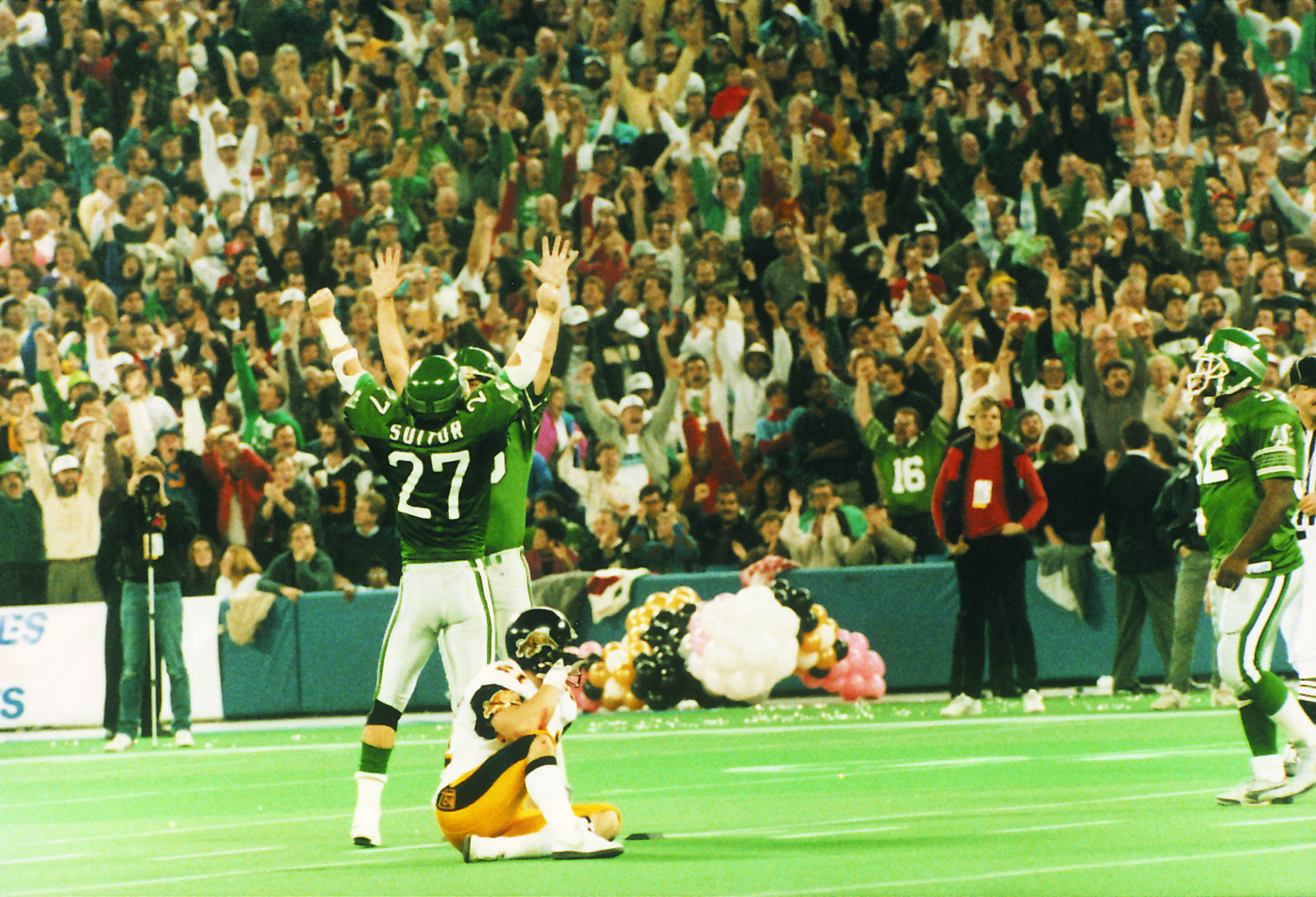 On November 26, 1989, Ridgway’s 35-yard field goal with nine seconds left in regulation time gave the Roughriders a 43-40 victory over the Hamilton Tiger-Cats at Toronto’s SkyDome. “The Kick” remains one of the most iconic plays in Grey Cup history.

Saskatchewan hit something of a dry spell over the next 12 years, reaching the playoffs just five times. In 1997, another telethon was conducted to bolster the franchise’s financial health. 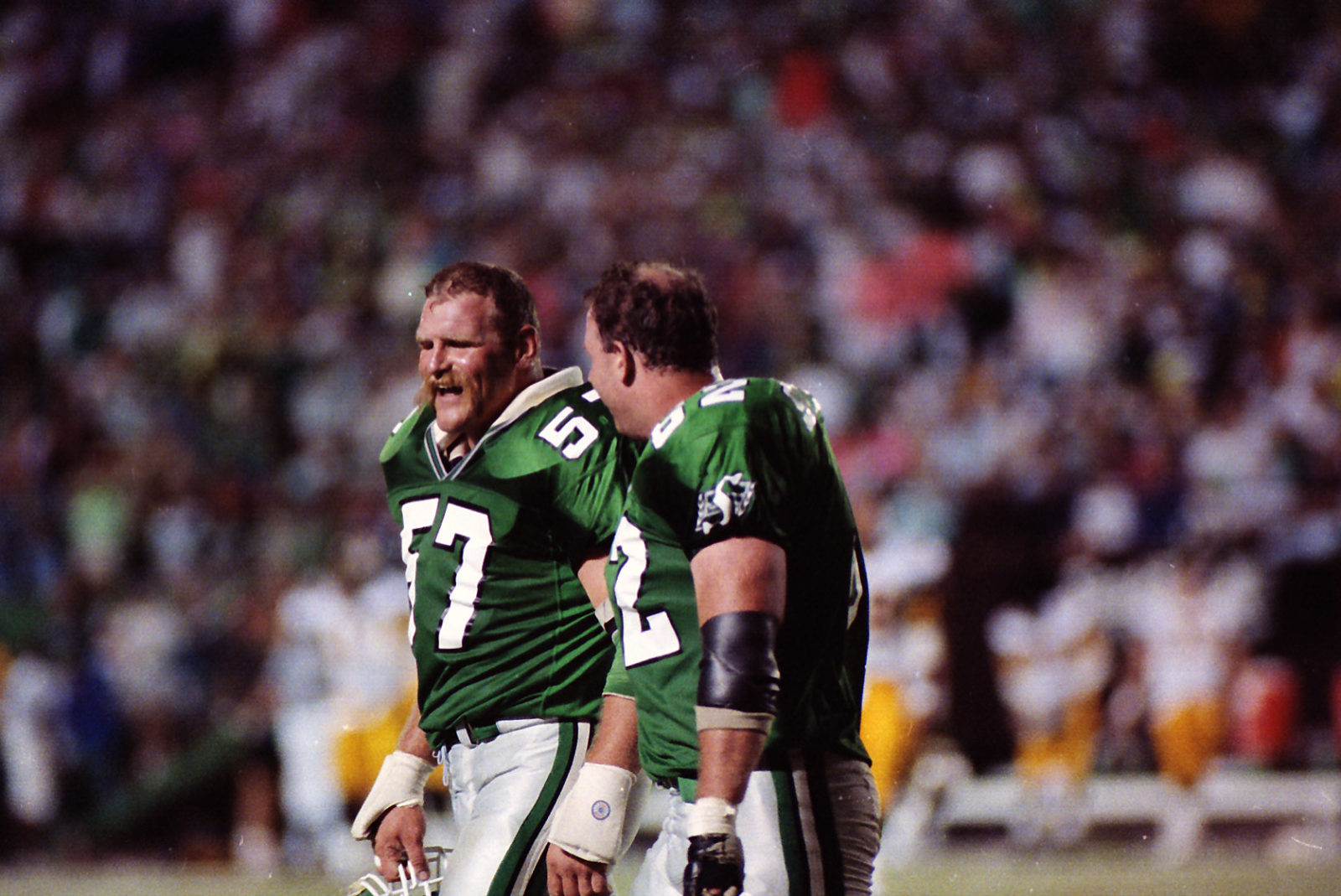 With its on-field questions answered, the Roughriders started to turn things around on the field and made the playoffs every year from 2002 through ’10. They reached the Grey Cup three times in that span, winning in 2007 (23-19 over the Winnipeg Blue Bombers) and losing in 2009 (28-27 to the Montreal Alouettes) and 2010 (21-18 to Montreal). 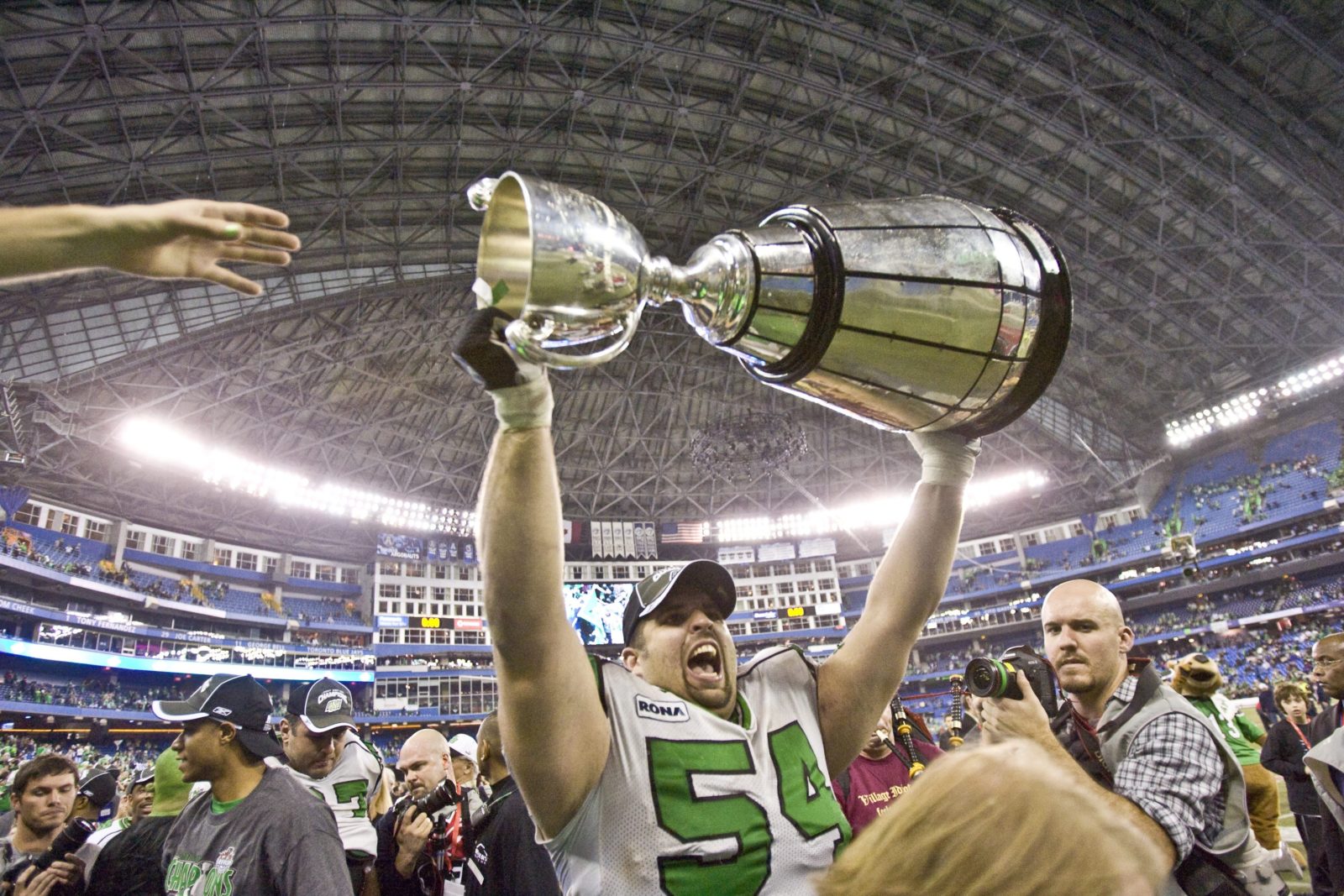 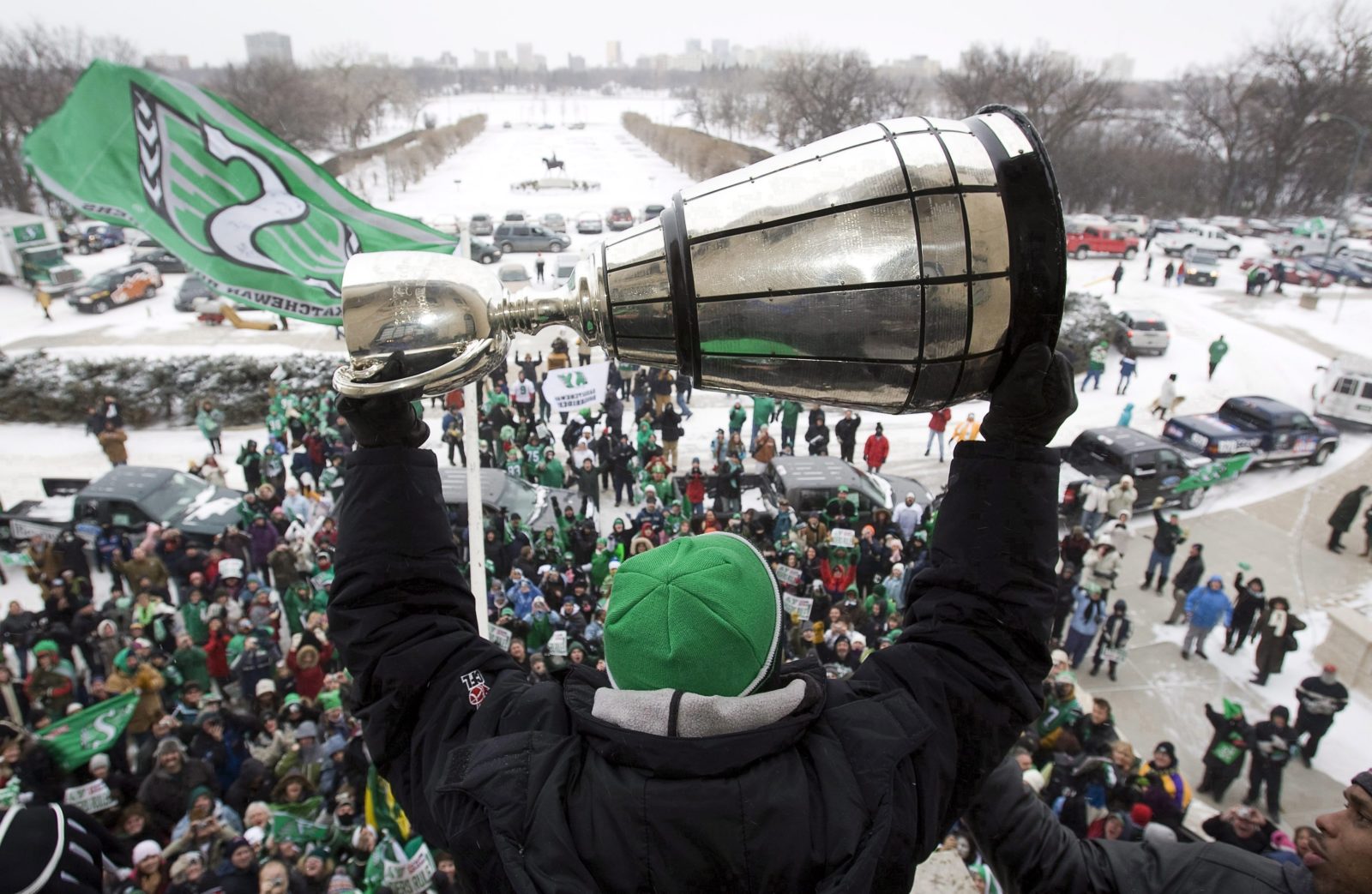 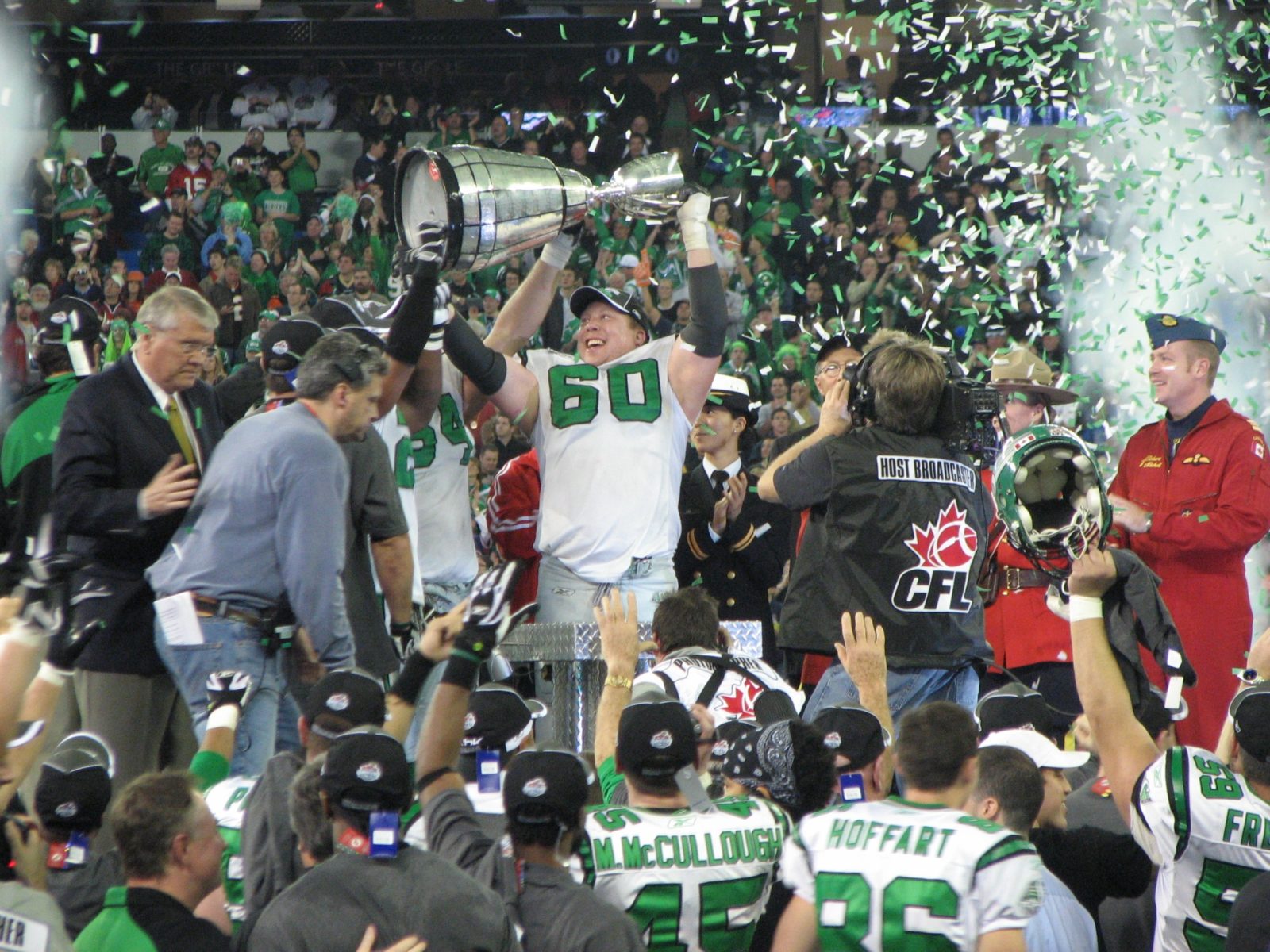 Saskatchewan returned to the big game in 2013 and completed a dream season with a 45-23 victory over Hamilton at Mosaic Stadium. With 44,710 patrons packing the old stadium, Roughriders running back Kory Sheets set a Grey Cup record with 197 yards rushing as Saskatchewan claimed its fourth league title in 19 appearances in the big game. 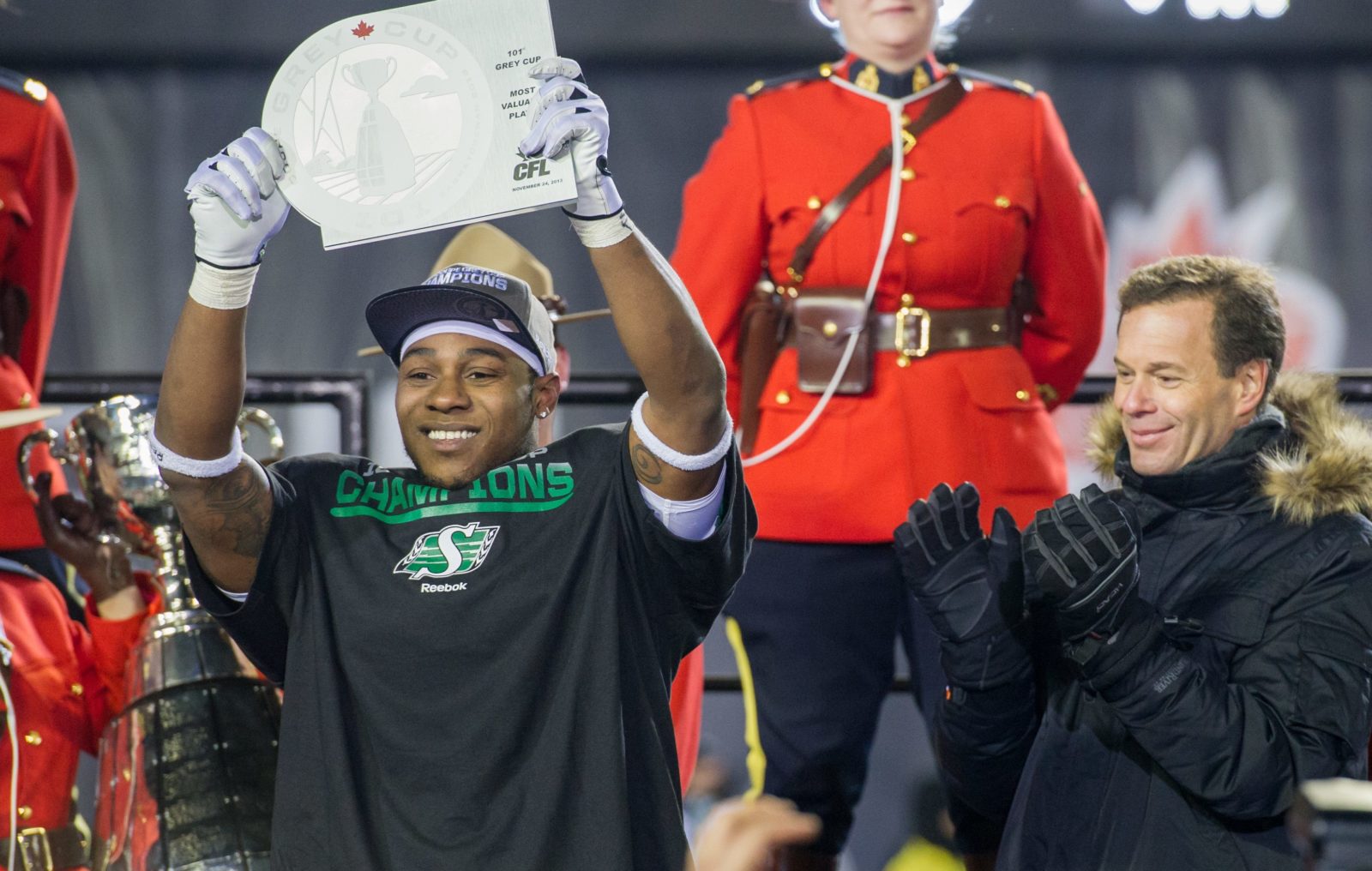 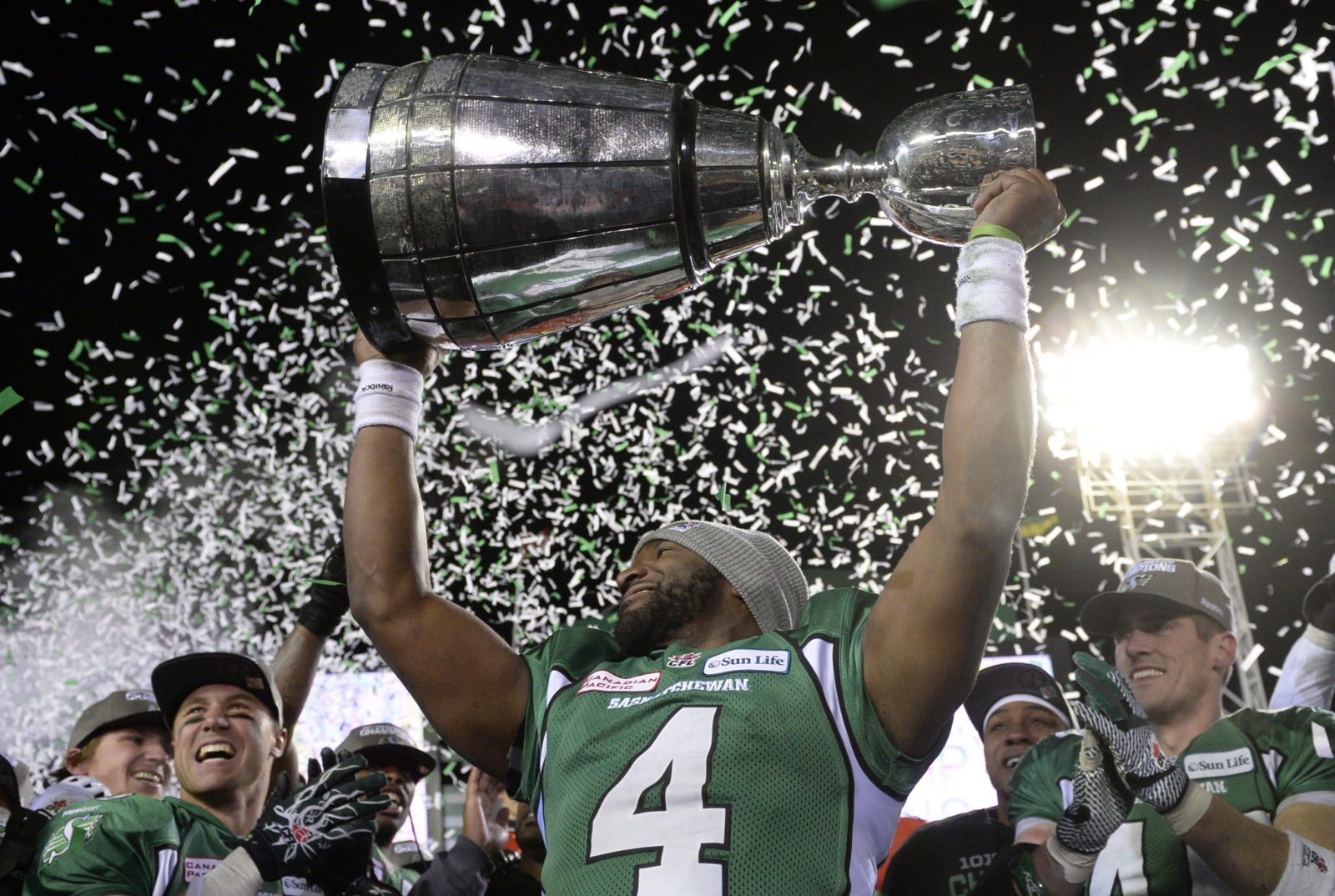 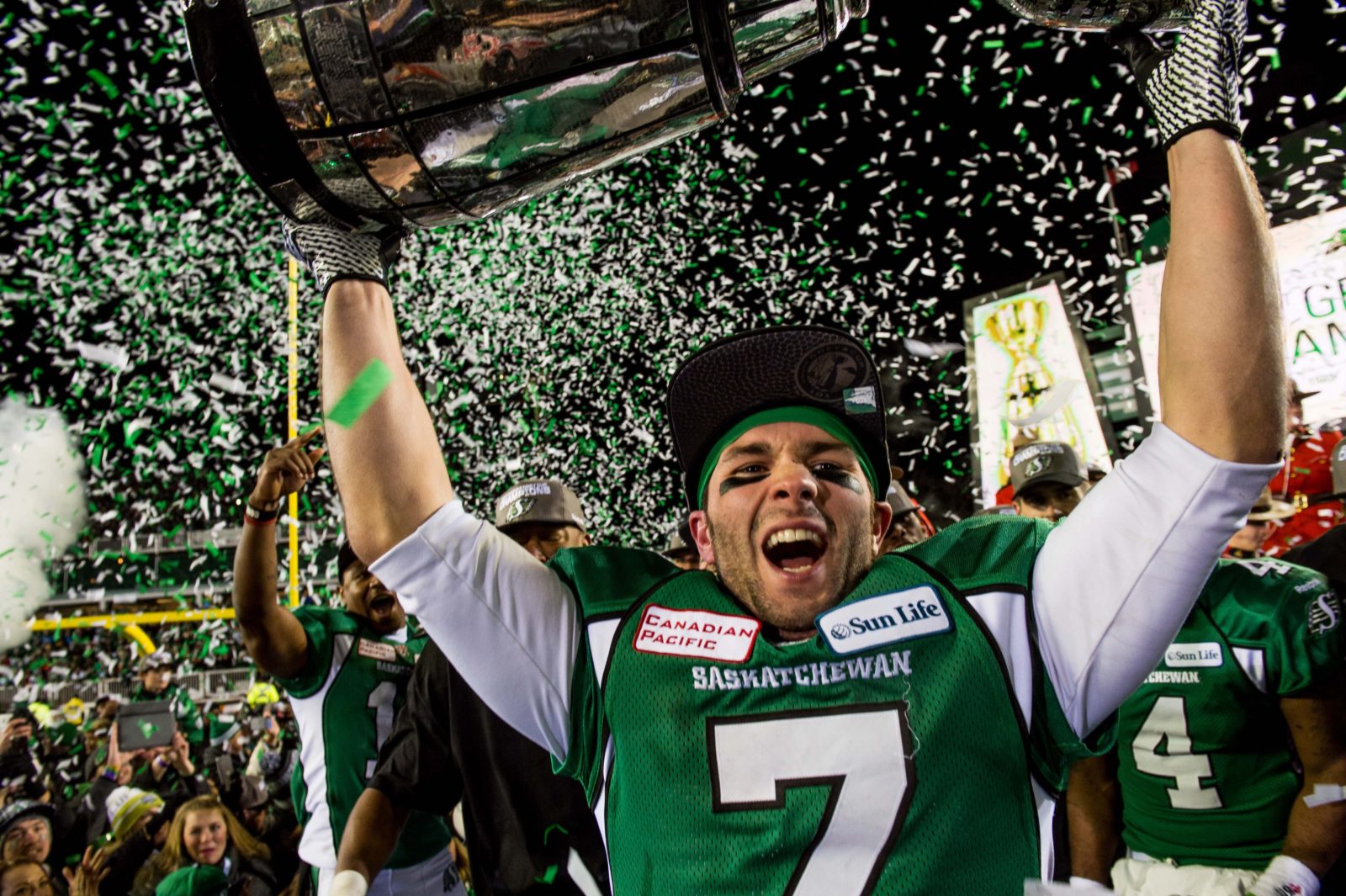 The Roughriders have yet to recapture the magic of 2013 in subsequent seasons, but there’s a great deal of optimism in Rider Nation that the current rebuilding process will produce favourable results.

Off the field, the Roughriders now are considered the CFL’s flagship franchise due to their success in the areas of marketing, merchandise and attendance. 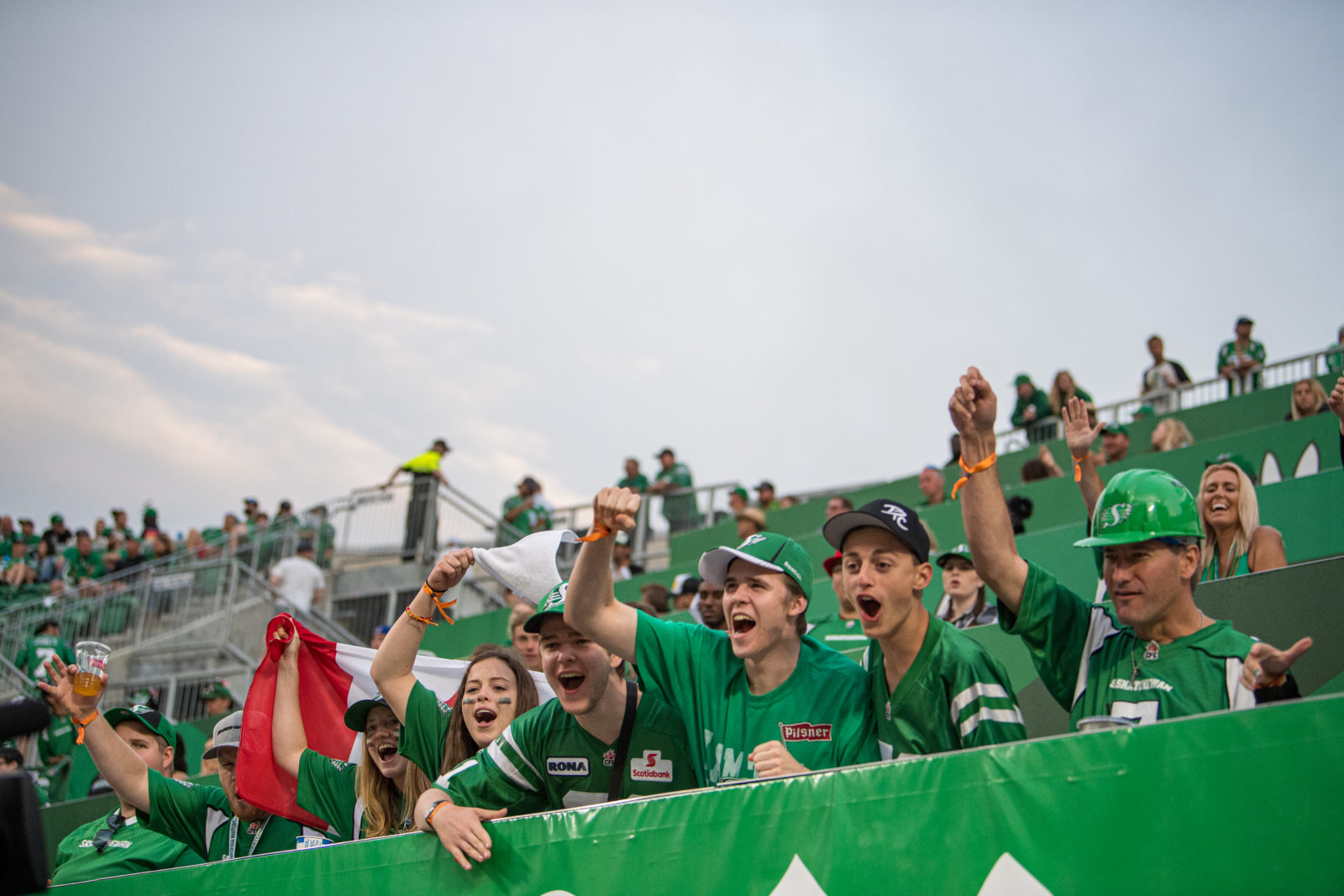 New Mosaic Stadium opened in 2017, meaning the future looks even brighter for the Roughriders with back-to-back seasons entering the playoffs, including hosting its first-ever playoff game from the club’s new home in Mosaic Stadium in 2018, where they would lose the Western Semi-Final to the Winnipeg Blue Bombers by a score of 23-18.

The Riders would come within seconds of a Grey Cup berth in 2017, ultimately falling short to the Toronto Argonauts in the Eastern Final in 2017 with a last-second drive by Ricky Ray, and the eventual 2017 Grey Cup champion Toronto Argonauts. 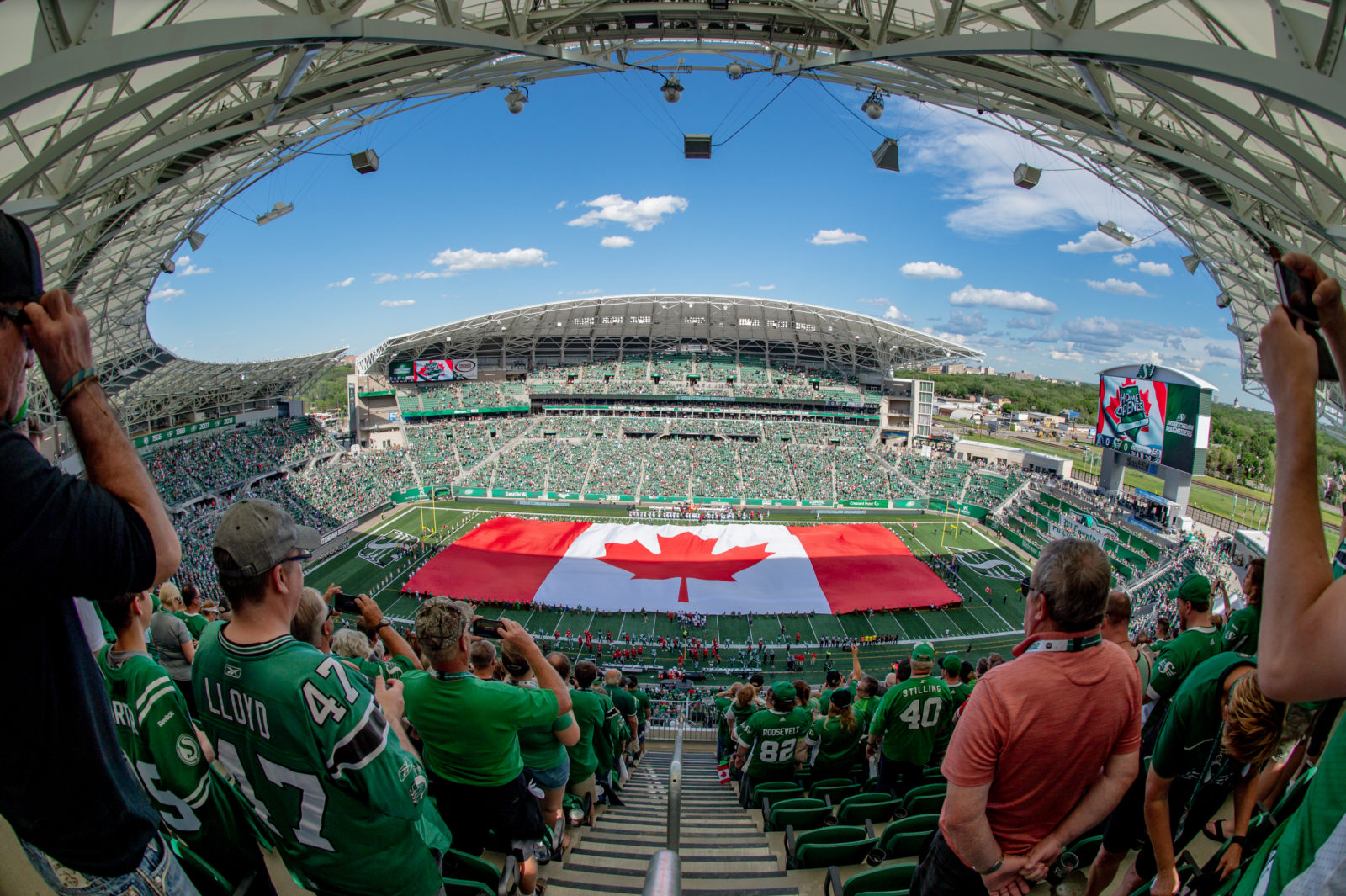 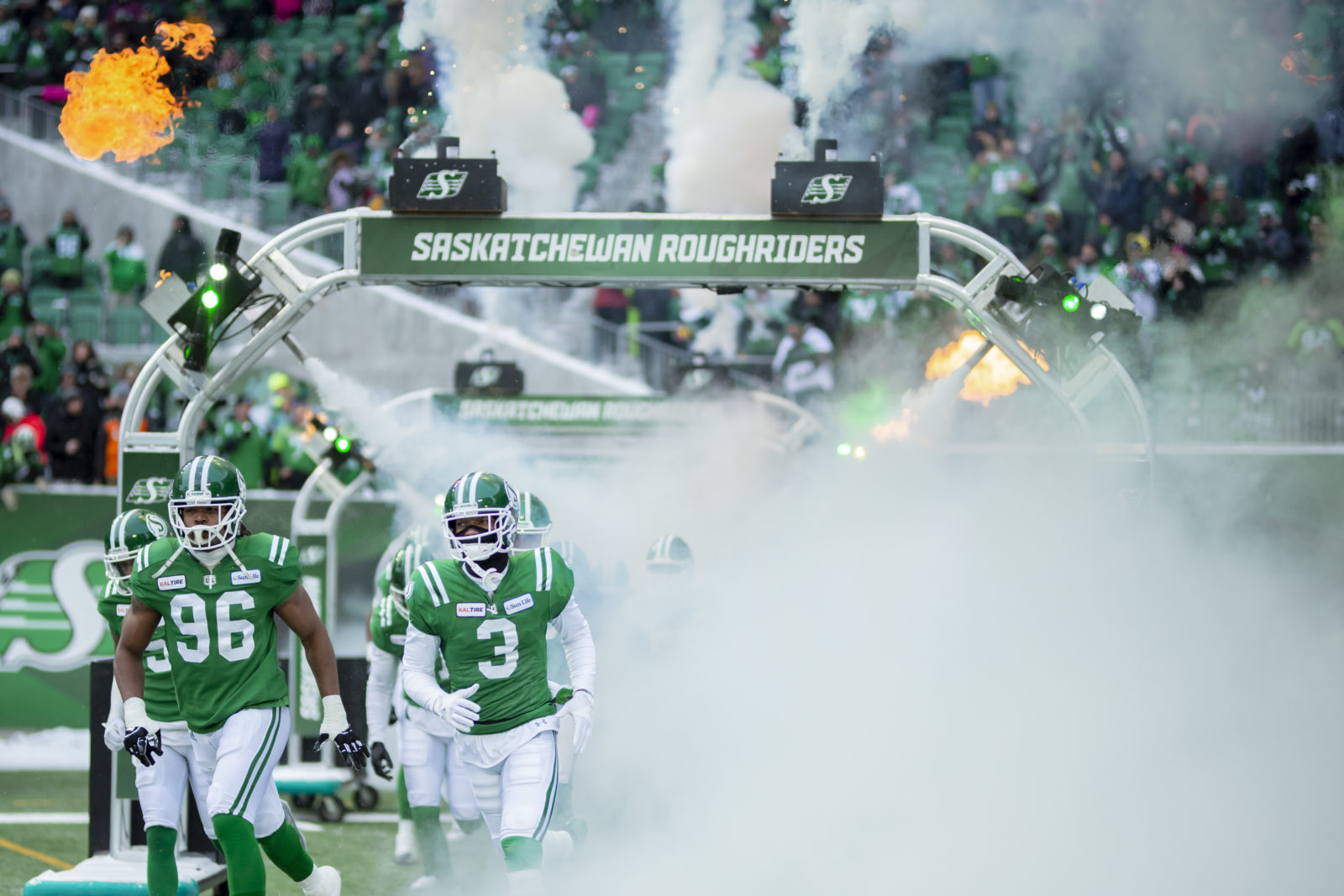