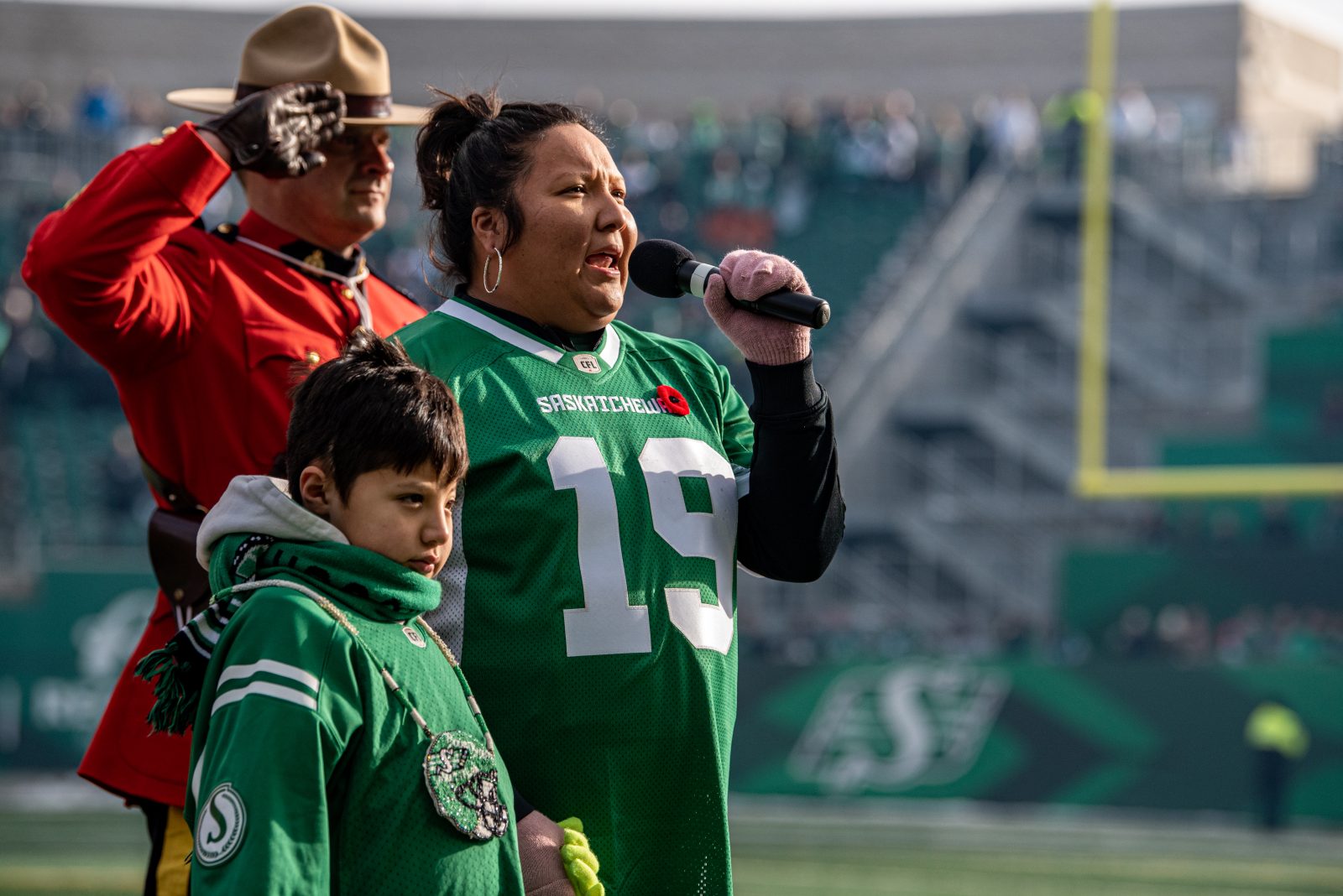 Teagan Littlechief put it to the universe that, one day, she would sing the national anthem at a Grey Cup game.

Now she’s set to belt O’Canada in English, French and Cree at the CFL’s championship game hosted in her home province on Nov. 20.

“I’m still in shock. I’m over the moon,” Littlechief said days after the CFL’s announcement.

“We were watching the news and they said, ‘A woman from Saskatchewan will be singing the anthem.’ Like, that’s me.”

Littlechief said she doesn’t know whether she’s the first Indigenous person to sing the anthem at the CFL’s championship game, but she is proudly the first from White Bear First Nations of Treaty 4.

“I just want to show them that First Nations, we’ve got this. We stand strong. Any barrier, we too can get through it,” she said.

Singing the anthem in English, French and Cree will be as much a first for Littlechief, as it is for the Canadian Football League.

The singer said she took inspiration from a trilingual rendition on YouTube for Sunday’s Grey Cup game. The inclusion of Cree also hits home for Littlechief, who grew up only learning English and French at the school she attended outside her community.

It was during the COVID-19 pandemic that Littlechief started learning Cree using an app. She said her 11-year-old son, Gabriel, already knows a lot more of the traditional language.

“My mom can understand Cree and a lot of my family can speak it,” Littlechief said. “It’s something that I really want to stick with and keep going with.”

Gabriel will be at Mosaic Stadium Sunday – as he is every Rider game his mom anthem sings – to cheer her on. 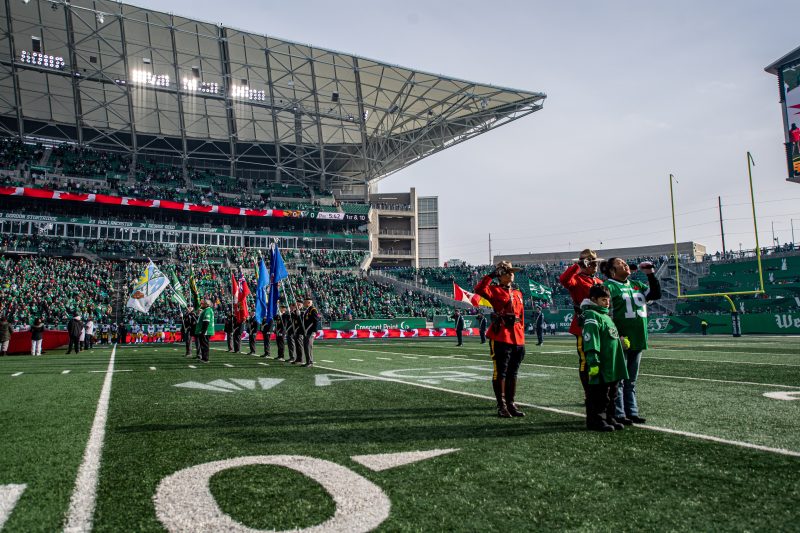 The 35-year-old first began singing Disney music and rock ‘n roll as a little girl around the house. Around the age of six, a preschool teacher told Littlechief’s mother to put her in voice lessons, which she then did in the nearby town of Redvers.

Littlechief’s talents developed with her commitment. She was a Soprano 1 who could sing opera as beautifully as she’d belt a rock number. She’d perform at competitions, festivals, galas – really anywhere she could.

“First Nations families would invite me out to sing and from there I’d just be hopping all over the place,” she said.

In 2008, she released a debut country album, Rising Above, that included the singles “Once An Eagle” and “Bring It On.”

Her next release, 2013’s “Home Fire,” reached No. 1 on the Saskatchewan Aboriginal Charts, while 2014’s “I’ll Bring the Party”, soared to No. 1 on the National Aboriginal Music Countdown.

But as her music career blossomed, Littlechief said she struggled with drug and alcohol addiction.

“There was just always a back-and-forth type deal with my music and my addictions. 2017 is when I really got my head cleared. I went and got help. I really needed it,” said Littlechief,

“My son is well aware of the struggles that we’ve faced and he’s very happy that he doesn’t see me the way I used to be. He absolutely loves the life that we have now. It’s totally different.” 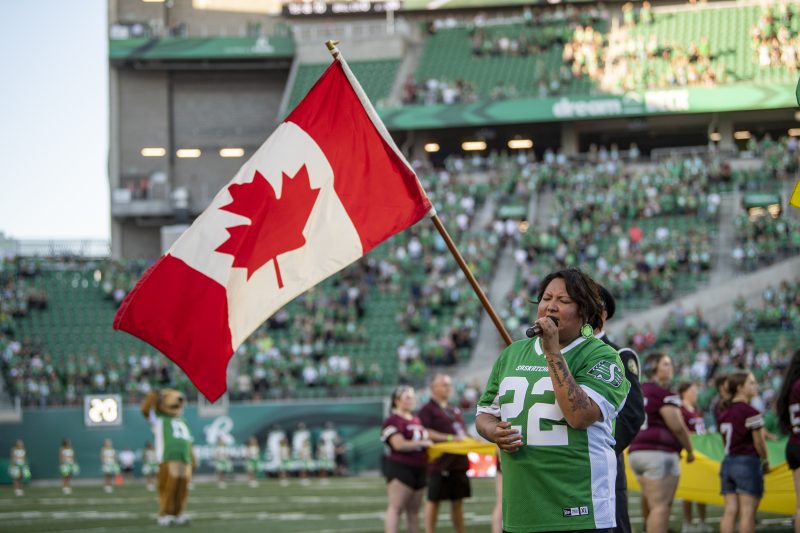 Part of that is Littlechief’s return to music, on her own terms.

She started singing the anthem occasionally for the Green and White in the final seasons at old Taylor Field. She later auditioned for the job when the club held a contest and continues to share anthem-singing duties with other talented vocalists from Saskatchewan.

She’s since sung O’Canada at Regina Pats WHL games and for the NHL’s Calgary Flames, with hopes of doing the same one day for the Toronto Blue Jays and Toronto Raptors.

In 2022, Littlechief reached new heights with her original music, claiming the Saskatchewan Country Music Association Award for Indigenous Artist of the Year. She was also voted Pure Country 92.7 Saskatchewan’s Next Big Thing.

Outside of her artistic pursuits, Littlechief is an addictions counsellor and youth support worker on White Bear First Nations.

“What I want to tell people is that you’re never alone,” she said. “For me now, it’s a battle, but it’s not a struggle anymore. I have found my footing and found exactly what makes me happy.”

The 109th Grey Cup from Mosaic Stadium in Saskatchewan will air live on Sunday, November 20 with kickoff slated for 5 p.m. local/6 p.m. ET. The sold-out championship contest will be broadcast across the nation on TSN and RDS – Canada’s home of the CFL.