Fajardo Furthers Football Feats As Family Joins Him In Saskatchewan 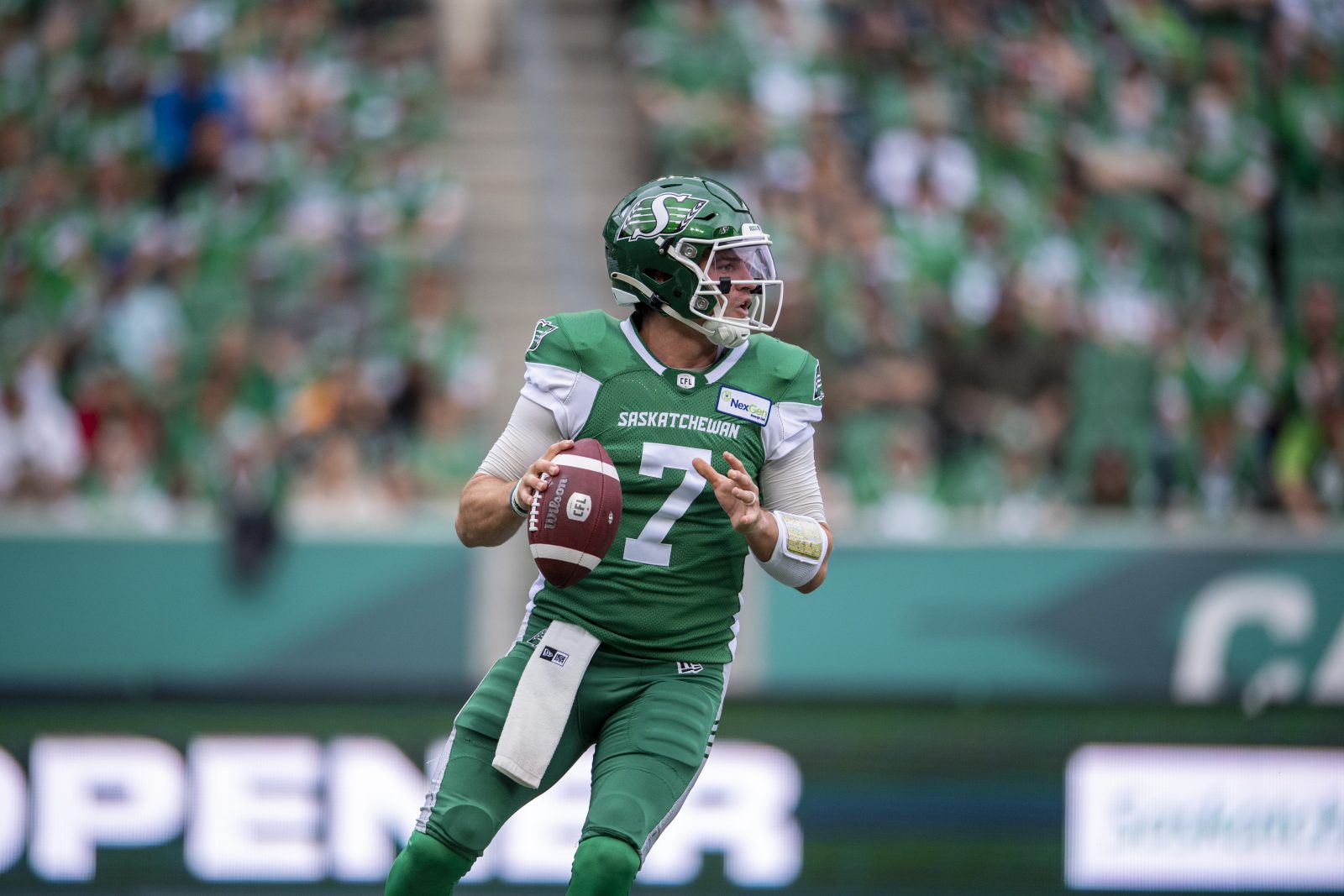 Fajardo Furthers Football Feats As Family Joins Him In Saskatchewan

Before Cody Fajardo had a breakout 2019 season as the Saskatchewan Roughriders starting quarterback, he was seriously considering leaving the game.

Years of being a third-string or backup quarterback, while far from family, weighed heavy on his mind.

“I was fully ready to walk away from the game, but I knew I would have some regrets,” he said. “One of the greatest decisions my wife talked me into was coming back and signing with the Riders.”

After three-years experience in the CFL as a Toronto Argonaut and BC Lion, Fajardo made it official with the Riders in February 2019.

He became the team’s starting quarterback that season, leading the league with 4,302 yards passing, throwing for 18 touchdowns and adding 611 yards rushing and 10 touchdowns. Fajardo was named a West Division All-Star, a CFL All-Star and the West Division’s Most Outstanding Player in 2019.

“This is the longest I’ve ever been in one professional team and so it feels like home for me and I’m just happy to be a part of it,” he said.

Saskatchewan is feeling even more like home as Fajardo’s wife, Laura, and the family’s goldendoodle, Sully, arrived in Regina this week.

The Fajardos are eagerly awaiting the birth of their first child, Luca, whose projected due date is Sept. 12. This also marks the first time Laura is with Cody in Saskatchewan during the regular season.

“It’s been three years of just living by myself and it gets a little hard at times because, you know, when you play football and you come home to nobody, all you do is think about the football,” he said.

“But when I come home and Laura is here, and our dog’s here and our son’s here, it’ll just make me just talk about normal life instead of football, which would be nice.” 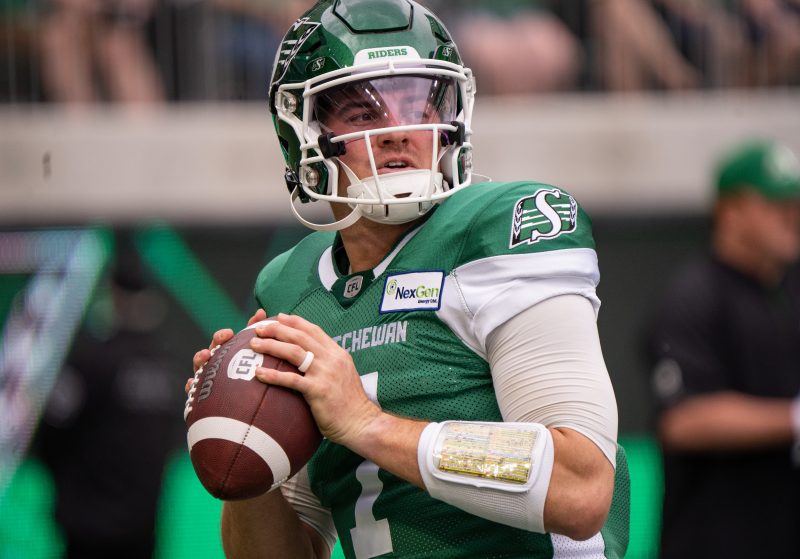 The team is 6-5 heading into the Labour Day Classic at home on Sunday, after a big 23-16 win in BC last week, with a much more mobile starting quarterback. Fajardo, who is known for his run-heavy QB style, sustained a MCL injury in Week 2 and has worn a knee brace ever since.

“I rely on my legs a lot and this year it’s been frustrating because I haven’t been as healthy as I wanted to be,” he said.

“I’ve never been graced with a lot of speed, but explosive (movement) and just athleticism, you know, I feel like God definitely helped me out there with some of that.”

The Riders are 17-1 when Fajardo rushes for 30-plus yards in a game. Meanwhile, the self-described “gritty” quarterback is sixth in all-time passing for the Saskatchewan Roughriders football club.

So far, Fajardo has played 41 regular-season games with the green and white, recording 793 completions for 9,420 yards, averaging 8.3 yards, with 44 passing touchdowns.

Fajardo said he had no idea where he was in the club’s passing standings, but since finding out is “completely honoured” to be in such good company. 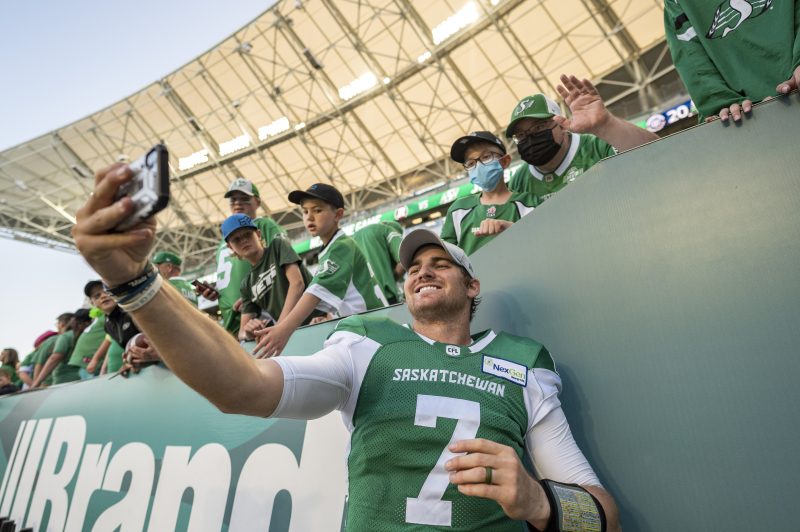 “When I look back on it though, it’ll mean a lot more to me than it does currently because I feel like I have a lot more football to play,” he said. “But it’s pretty cool to be honoured.”

The California product said he discovered his quarterbacking style, which favours running, in high school and adds he is a “win-at-all-costs” competitor.

“It doesn’t matter statistically how I get it done, as long as I get it done — and we’re the win column,” he said. “I pride myself in my toughness, my availability to the team and being out there with my guys, being able to adapt on the fly. There’s been a lot of that, especially this year.”

The Saskatchewan Roughriders are 27-12 when Fajardo is starting quarterback.

As with any top job, even when done well, Fajardo faces the critical ire of a passionate fanbase. It’s an aspect of the role he understands and takes in stride, grounding himself with faith and family.

Fajardo will lead the green and white for Sunday’s sold-out Labour Day Classic against the Winnipeg Blue Bombers at Mosaic Stadium. Kickoff is at 4 p.m.

So far in 2022, he has played 10 of 11 games, only missing one due to a COVID-19 diagnosis, completing 174 of 255 pass attempts, 12 touchdown passes with nine interceptions. Fajardo has 47 carries for 195 yard rushing and five touchdowns on the season.

No. 7 started both the 2021 West-Semi Final and West Final, adding another 464 yards passing and two touchdowns as well as 110 yards rushing and one touchdown. He was named the Roughriders’ Most Outstanding Player.