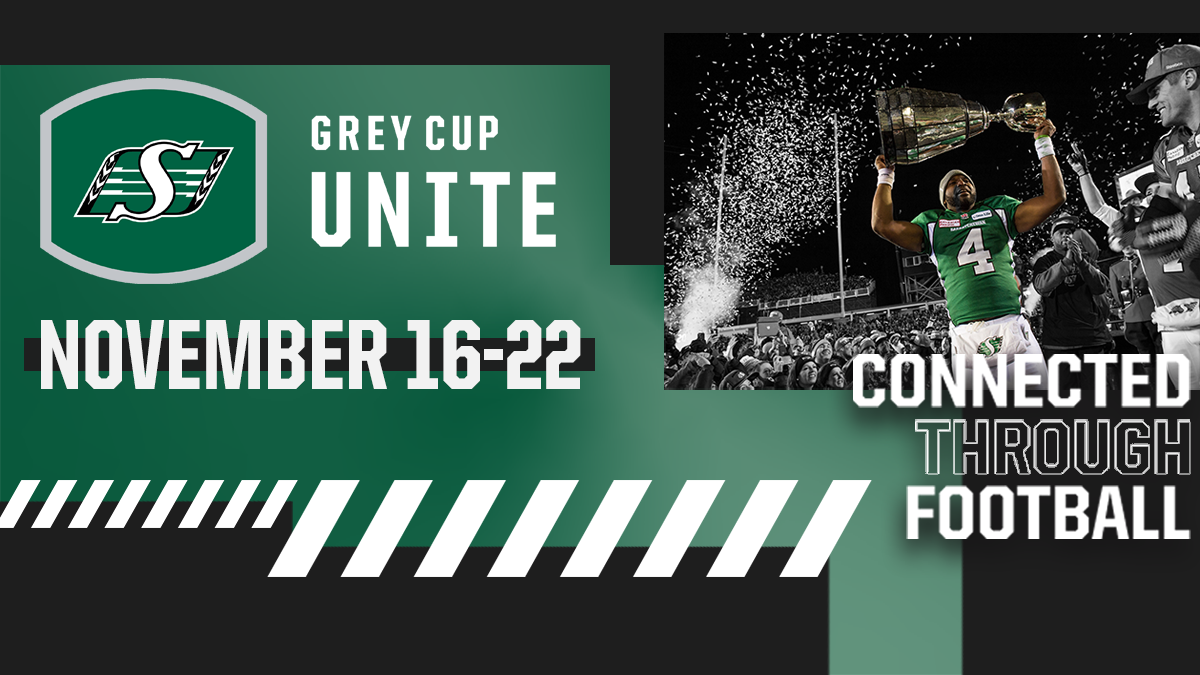 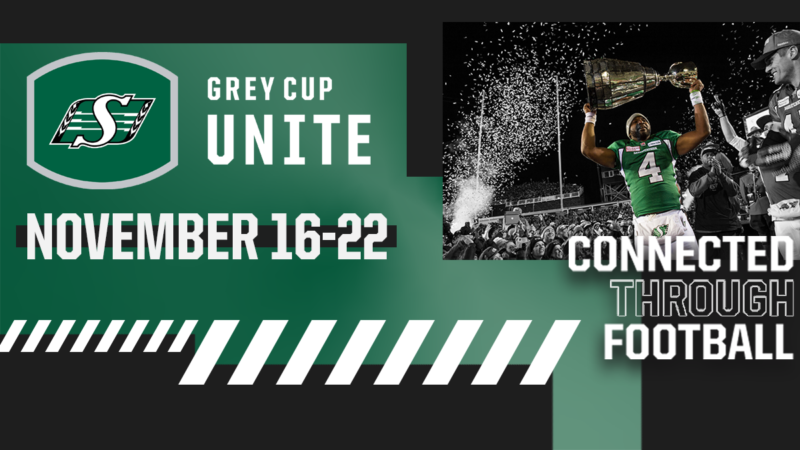 The Saskatchewan Roughriders are thrilled to join the Canadian Football League to celebrate Grey Cup Unite with fans across the league during the week that would have seen many travel to Saskatchewan for 2020 Grey Cup Festivities.

Alongside the CFL and the eight other Clubs, a week of events starting Monday, November 16th will be available to fans of the CFL and specifically Rider Nation.  Join us for special activities including Roughrider players and new features done in appreciation of the fanbase that gives us their all.

Keep up to date and don’t miss a minute by registering for Grey Cup Unite events at https://register.greycupunite.ca/

Here are some events Rider fans can look forward to:

Commissioner Randy Ambrosie will kick off Grey Cup Unite on Monday, November 16 with a special virtual town hall where he will update fans on the league’s plans for the future.

You asked, they answered. Join Rider Quarterbacks Cody Fajardo and Isaac Harker as they get ready to ‘tell all’ and answer questions from Rider Nation for the season finale of the Rouge Report Podcast presented by Young’s Equipment.

Catch Head Coach Craig Dickenson in the Head Coaches Conference with his brother, Stampeders’ Head Coach Dave Dickenson and B.C. Lions Head Coach Rick Campbell. This media availability will be posted on CFL.ca after its conclusion.

Saskatchewan Roughriders defensive coordinator Jason Shivers will take part in the Diversity Is Strength: Racial Justice Roundtable presented jointly by the CFL and CFLPA. The roundtable is hosted by Gemini-nominated broadcaster and host of the Waggle, Donnovan Bennett, and will feature alumni, coaching personnel and current players as they discuss their personal experiences with prejudice and discrimination.

If it weren’t for Rider Nation, there wouldn’t be the Saskatchewan Roughriders! The Roughriders will debut a feature piece on the 2020 Roughrider Champion Program. Hear how fans have supported the club in these difficult times and go behind the scenes for private tour of the Football Operations spaces at Mosaic Stadium. Rider Nation is our heart and soul, and this piece is to say thank you and to honour those who generously gave to the Club in a time of crisis.

Cody Fajardo will be taking part in a player media day, taking questions alongside fellow pivots Bo Levi Mitchell and Nick Arbuckle. This media availability will be posted on CFL.ca after its conclusion.

This past weekend, fans voted on the Rider Grey Cup Championship game they wanted to relive and starting on Friday, November 20th, we’re making it available to fans on demand for their very own Riderville at Home! While we can’t gather together for a traditional Riderville party at this time, we will provide you with a how-to guide to bring Riderville to your own living room. Plus, in place of commercial breaks, the chosen game will be packed full of some of your favourite Rider in-game features from 2019 including Jammin’ with the Riders. Sharing your Riderville at Home on social media could net one lucky fan two tickets to the Grey Cup in 2022!

Stay tuned to hear what we have planned on the day that would have been the 108th Grey Cup at Mosaic Stadium.