Defining Moments for the Green and White 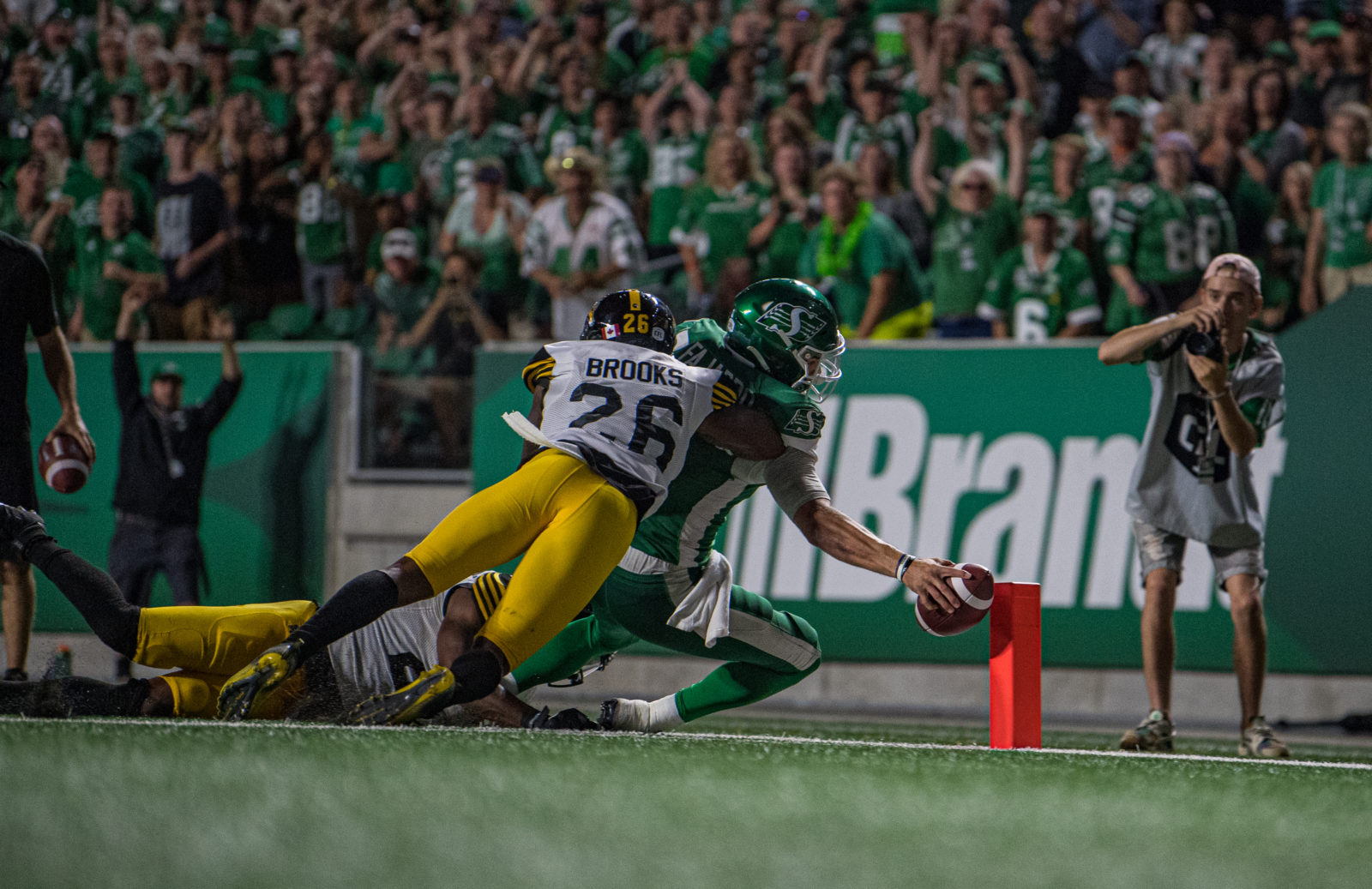 Defining Moments for the Green and White

REGINA – The successes of the Saskatchewan Roughriders have not been a guarantee. After losing three of their first four games, it took a long sequence of significant events to pull the Riders into the postseason.

Here’s a rundown of significant events that led the Riders to only their third first place finish since 1975:

FAJARDO LEAPS INTO PILON VS. HAMILTON

The legend of starting quarterback Cody Fajardo was built through months of head-turning play, but the marquee moment of Fajardo’s first season as a CFL starter may have been on Aug. 1 in Regina.

When we grow up, we want to be @CodyFajardo17.#UniteInGreen pic.twitter.com/ffDvPQxycc

The Riders trailed the visiting Hamilton Tiger-Cats – far and away the best team in the CFL’s east division. Down 19-16 with two minutes to play, Saskatchewan needed a big-league sequence from their first-year starter.

They got just that. 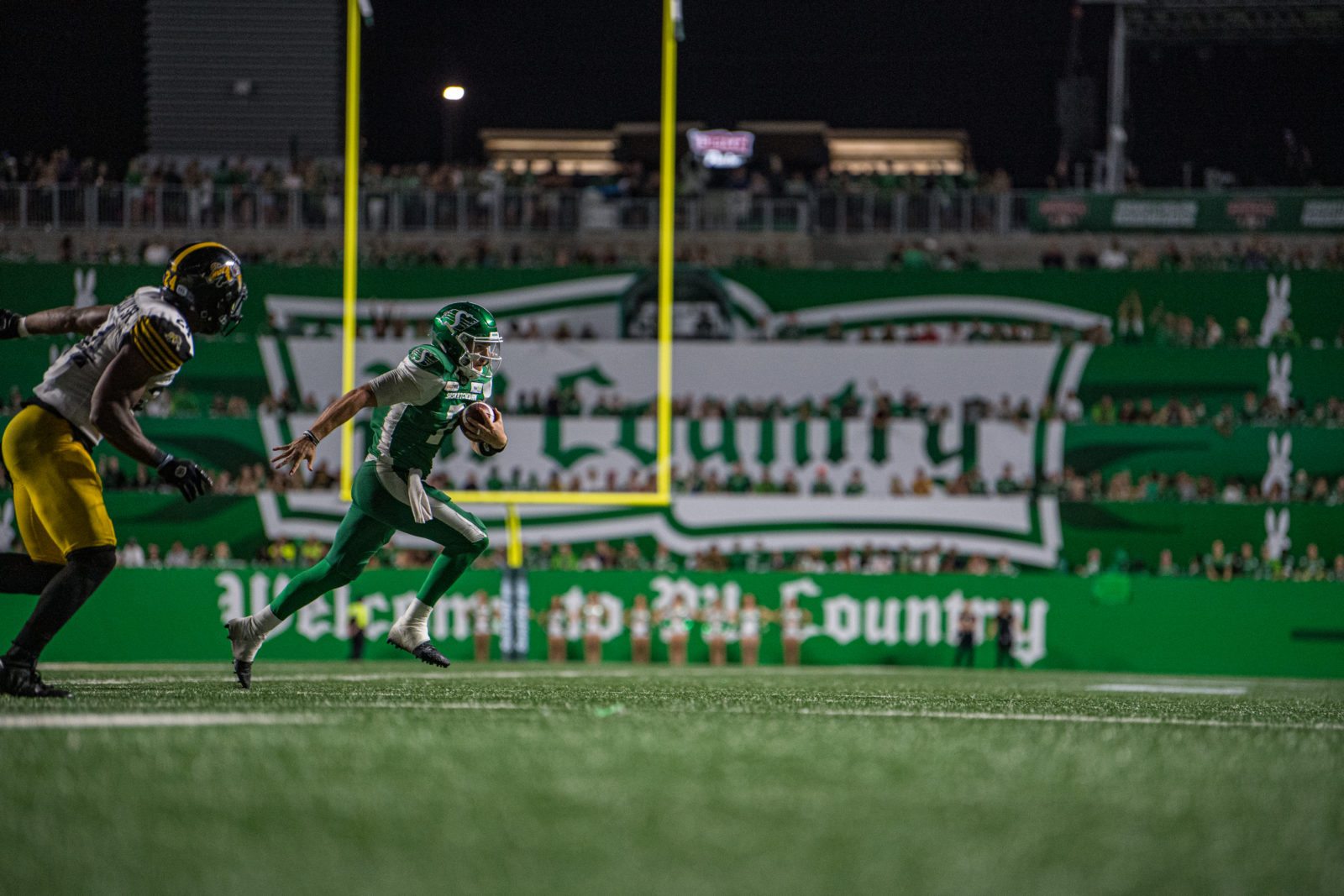 First, a 38-yard kick return from Kyran Moore put the Green and White in good field position. Then, Fajardo drove the Riders downfield with the limited time on the clock, and took the ball himself on the last play of the drive – a 5-yard run completed with a dive into the left pilon of the Ticats end zone.

Call him Mr. Walk-off — Brett Lauther has had a flare for the dramatic this year, hitting multiple clutch field goals that amounted to two walk-off wins. One of them was the biggest in recent memory.

Can’t get sick of watching Lauther and Ryan running to Pil Country https://t.co/Ann6RJIetr

The Labour Day classic featuring Saskatchewan and the Winnipeg Blue Bombers has long been dominated by the Riders – winning 14 of the last 15 meetings. But if it weren’t for Lauther’s clutch last second field goal on Sept. 1, that lone win in the Bombers’ column would have doubled. The Chris Streveler-led Bombers were poised for a victory after a touchdown near the three-minute warning to take a 17-16 lead at Mosaic Stadium. But Cody Fajardo and the Riders offence used all their will to drive down the field and walk off the Bombers. The timeless moment sent Rider Nation into a frenzy.

Lauther says he had never kicked a game-winning field goal before that moment. “I had been preparing for four or five years for opportunities like that,” he said. “I just wanted to go out and execute the kick, and that’s what we did.”

Weeks later on a frigid night in Edmonton, the Nova Scotian did it again with a field goal at the last second to win a game at Commonwealth Stadium. This one came from 43 yards out, and was his second in five minutes. “He was struggling in pre-game, and that was a tough day to kick the ball,” Dickenson said after the Oct. 26 game. “But (Brett) has got some moxie to him, just like a lot of those guys in there.”

Saskatchewan had a tall task ahead to clinch the West Division. The Edmonton Eskimos came to town to play spoiler, and after a late-game Roughriders win the previous week, the Eskimos were looking to spoil the party on the prairies. They made the game interesting in the second half, even holding a 13-12 lead at one point.

But as Riders colour analyst Luc Mullinder said on the 620 CKRM Riders radio broadcast: “they started playing like themselves in the fourth quarter.” Saskatchewan had a late lead, but the Eskimos had the football with a minute left. They needed a hero – and it came in the form of Cam Judge. 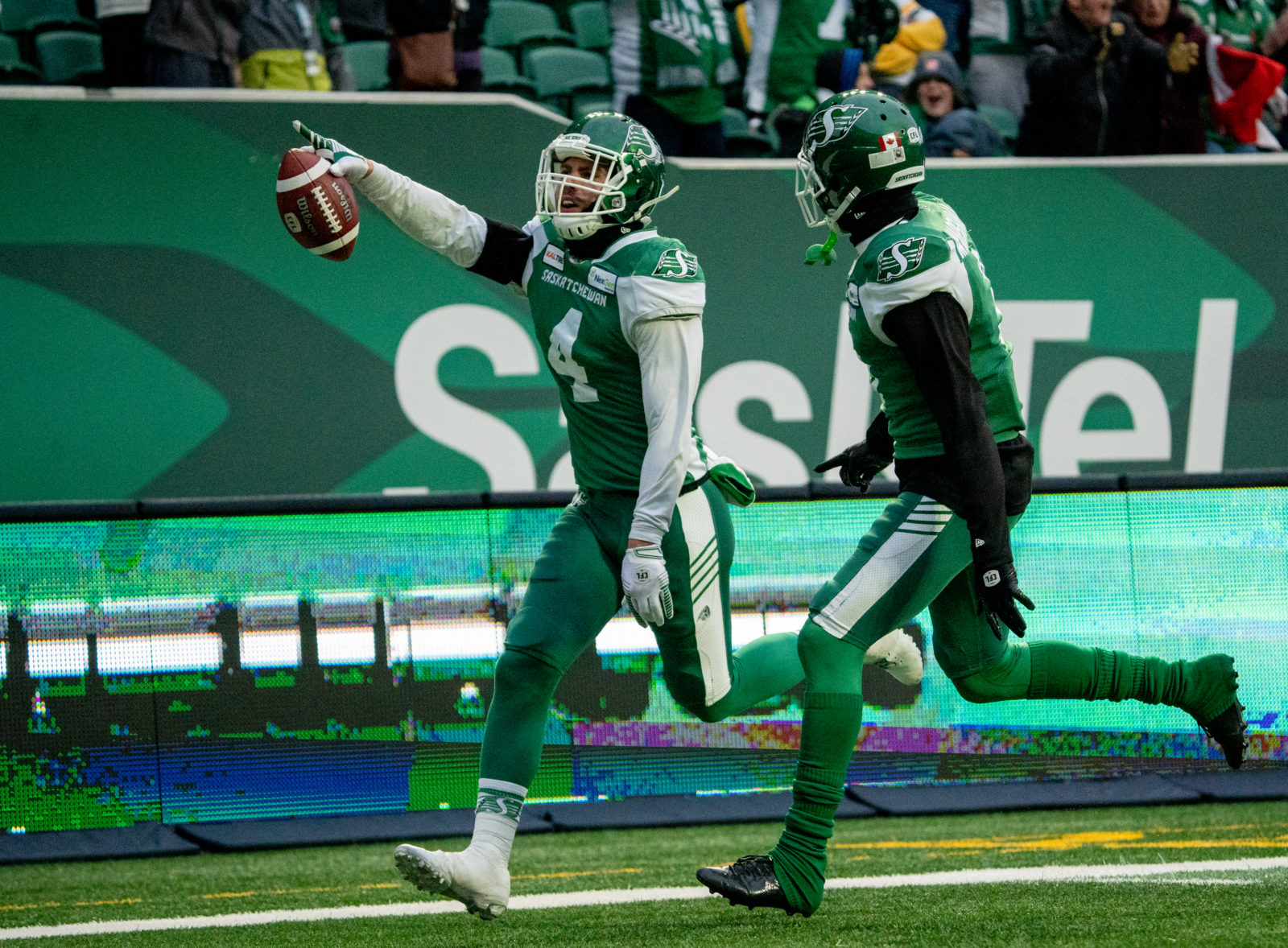 The Saskatchewan Roughriders take on the Edmonton Eskimos in CFL action on November 2nd, 2019 at Mosaic Stadium in Regina, SK. Derek Mortensen/Electric Umbrella

Edmonton inserted a new quarterback, Troy Williams, into the game, and the first pass he threw was picked off by Judge around the 15-yard line. He took it to the house to establish a 10-point Rider lead, and all but finalized a berth in the West Final.

DEFENCE ARRIVES WITH THREE PICKS IN FIRST QUARTER VS. OTTAWA

Defining moments of a season often come down to narrative. Going into the second meeting of the season between Saskatchewan and Ottawa, the Roughriders had a lot to prove. They had turned a corner since a 1-3 start, but a rematch against the REDBLACKS was a yard stick game that brought back memories of an early season 44-41 loss at TD Place in the nation’s capital. So the Roughriders defence needed a strong start. And they got it in the form of back-to-back-to-back interceptions.

“They wanted to prove that first game was a fluke, and I thought they played well.”

Nick Marshall picked the first one at just 12:55 of the first quarter, leading to the first points of the game from former REDBLACK William Powell. LJ McCray got the next one on the ensuing Ottawa possession, taking a Dominique Davis pass. And then Derrick Moncrief completed the trifecta later in the quarter. The Riders had points in all three drives, took a 17-0 lead into the second quarter, and shattered many doubters in the process.

“The defence had a chip on their shoulder,” said Dickenson in his post-game media availability. “They wanted to prove that first game was a fluke, and I thought they played well.” Any questions surrounding Saskatchewan’s legitimacy as a contender evaporated after the 40-18 dismantling of Ottawa on Aug. 24.

“LIGHTS OUT”: SHAQ TURNS ON THE JETS, SEALS WIN VS. BOMBERS

A big 61-yard touchdown for Shaq Evans symbolized much more than a Riders win. It pulled the Riders away from the visiting Winnipeg Blue Bombers, and catapulted them into first place for the first time in 2019.

Late in the fourth quarter, the Riders led 14-6.While the Rider defence had themselves an impressive outing statistically, the Riders needed an offensive outburst to really seal the deal and put themselves into the driver’s seat of the West Division. The Riders got their shot after a clutch LJ McCray interception deep in Saskatchewan territory. It came with about five minutes remaining, and gave Fajardo the ball back. A few receptions put the green and white on their own 49-yard line. Then, Fajardo turned to Shaq on 1st & 10, and drilled him with a clothesline pass.

Evans stepped away from a tackle, and unleashed blistering speed to beat two Bombers, and salt away the biggest win of the year to that point. 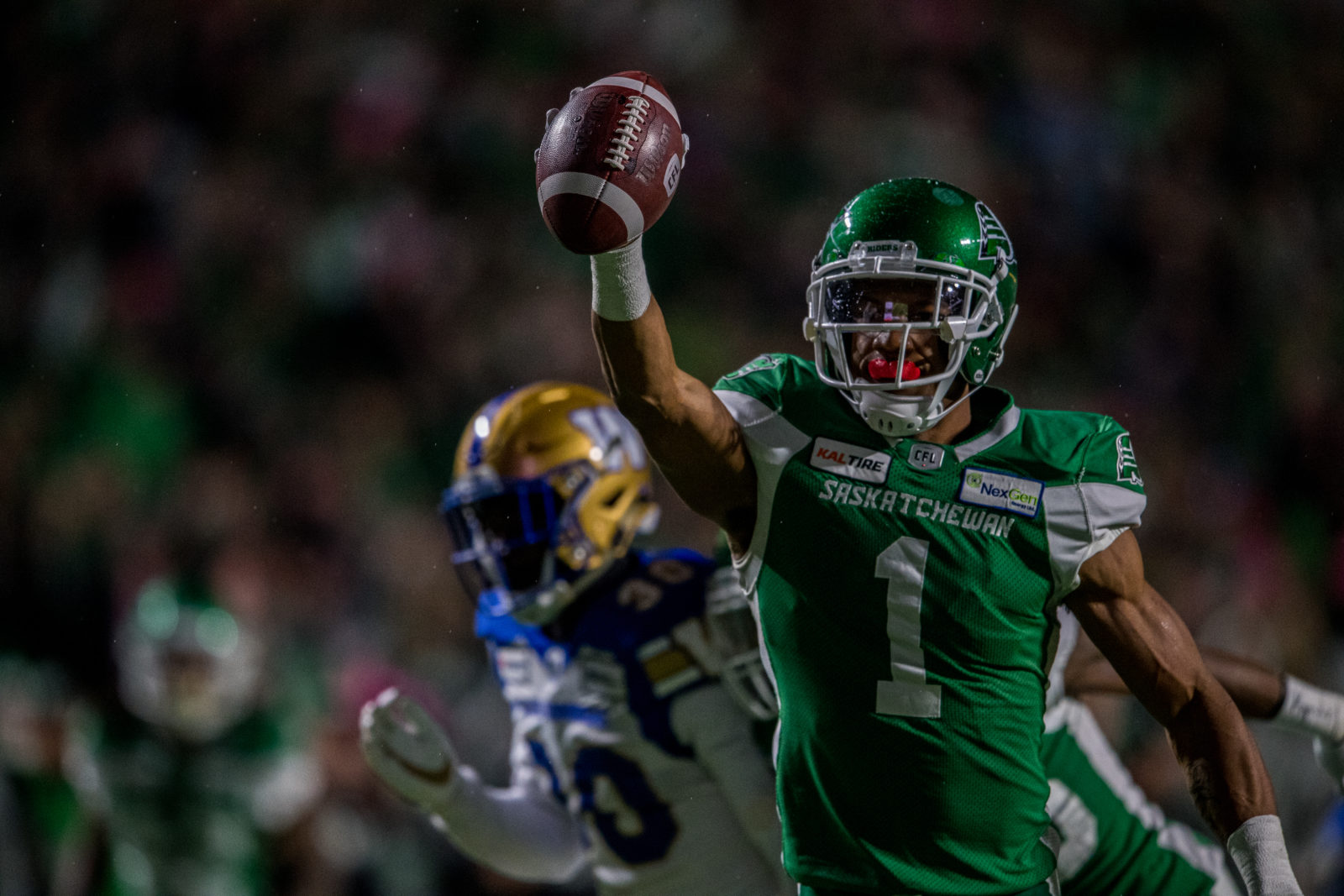 The moments that define a successful season will always be frozen in time – but the most memorable occur in the postseason. The Roughriders hope to create many more in the final two games of 2019.

The first of those will be Nov. 17 in Regina, when Saskatchewan hosts the winner of the divisional semifinal between Winnipeg and Calgary.

Tickets for the West Final from Mosaic Stadium are available at Riderville.com.