The Roughriders are set to honour Humboldt

The Roughriders are set to honour Humboldt

A football game is to be played Saturday at Mosaic Stadium, but a hockey team will be on many people’s minds.

The SJHL’s Humboldt Broncos will be honoured prior to and during the CFL contest between the Saskatchewan Roughriders and Montreal Alouettes.

On April 6, the Broncos were en route to a playoff game in Nipawin when their bus collided with a semi-trailer unit at a rural intersection. The crash claimed the lives of 16 people on the bus and injured 13 others.

Roughriders president-CEO Craig Reynolds subsequently contacted Broncos president Kevin Garinger and promised the support of the Roughriders organization, in both the short and long term.

From that came the pledge of a #HumboldtStrong tribute game at which the Broncos, family members, billet families, the community and first responders would be honoured. The contest against the Als was chosen for that purpose.

According to Roughriders chief brand officer Anthony Partipilo, the reason for the team’s actions is simple: The Roughriders are a community-owned team whose objective is to serve the people of Saskatchewan and to give back to the communities in the province. 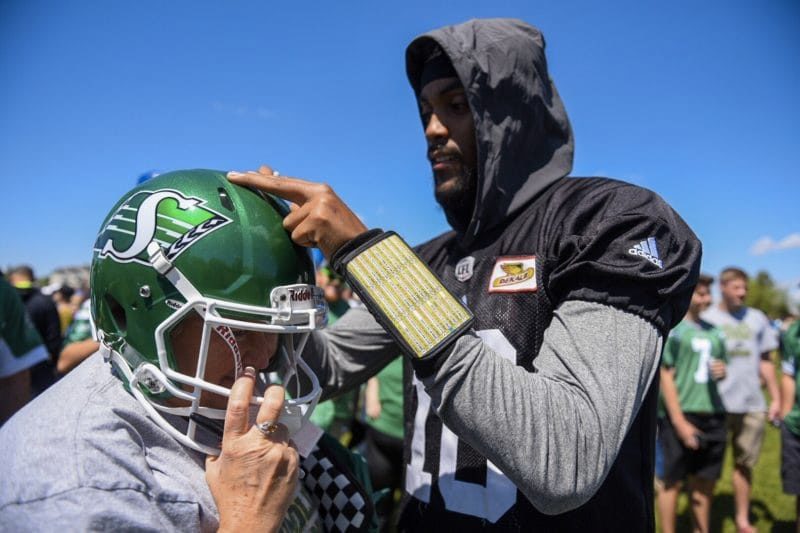 The journey that the Humboldt community has gone through ever since this terrible tragedy has obviously had our communities come together to grieve,” Partipilo said.

“We felt we could potentially help in the healing. That’s why we’re having family members, billet families and first responders here at the stadium so that all of Rider Nation, both here at the stadium and at home watching on TV, can put their arms around them and show their support.

The Roughriders have tried to help in as many ways as possible, from assisting with the production and distribution of merchandise to offering logistical help to holding a training-camp workout in Humboldt in early June.

The game Saturday will be another way of assisting those affected by the accident feel the support of the Roughriders, the Alouettes and the CFL community as a whole.

“What Kevin says is that they very much need to feel this turning point,” Partipilo said in reference to Garinger. “They can’t be carrying this heavy burden by themselves for a long period of time without it causing serious damage to them as people and as individuals. This is really all about lifting their spirits enough so that they can carry on.”

The Mosaic Stadium gates are to open Saturday at 5 p.m. The pre-game ceremony is to start at 6:45 p.m., so fans are encouraged to be in their seats by that time.

Every fan is to receive a Humboldt Strong ribbon as they enter the stadium.

The pre-game activities are to include a video dedicated to the Broncos and the community of Humboldt, and members of the team and the city will participate in the national anthem and coin-toss ceremonies.

Canadian, Saskatchewan and Humboldt Strong flags also are to be unveiled on the field during the pre-game ceremony.

The Canadian country music group Hunter Brothers is to sing O Canada and will perform a three-song set during halftime.

Ribbons will be displayed at the 29-yard lines during the game to honour the 29 occupants of the bus. The Roughriders and Alouettes — along with every CFL team that is playing this week — will have Humboldt Strong ribbon decals affixed to their helmets.

This week in the #CFL, all teams in action will include a helmet decal in support of Humboldt, SK.

Our league is #HumboldtStrong. pic.twitter.com/kT7YaltsSP

The Roughriders and Als also will present autographed helmets to the Broncos organization. As well, Montreal is to provide a jersey signed by former Als offensive lineman Scott Flory, a product of Regina who now is the head coach of the University of Saskatchewan Huskies football team.

Family members are flying in from across the country to join a guest list that is to comprise more than 200 names. The hope is that all of the guests will be comforted during the event by those on the field and in the stands.

“You know that the families are going to feel the love of Rider Nation here at the stadium,” Partipilo said. “Being together in this space, I think that’s what will make the moment special.

“The reaction of the fans to the videos that they see, to the ceremonies on the field, to the unveiling of the flags will be very deep, emotional, powerful moments. The dynamic of the family members and Rider Nation all experiencing that at the same time in a live setting is going to be something to remember forever.”

Tickets are available for Saturday’s game. They can be purchased online at www.riderville.com/tickets or at www.ticketmaster.ca, or by calling the Roughriders’ ticket office at 1-888-474-3377.