Makana Henry has a special bond with Scott Collegiate 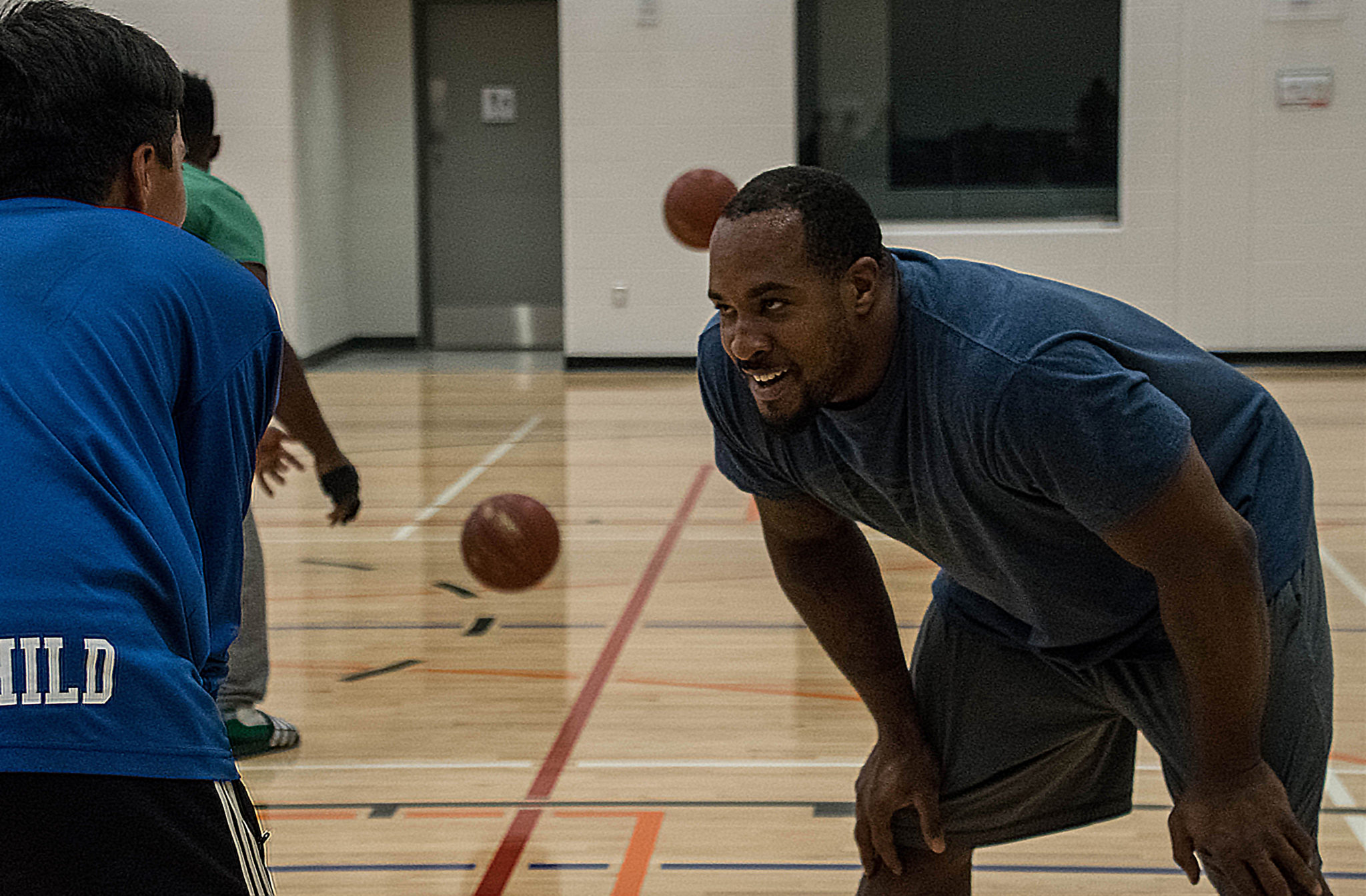 Makana Henry has a special bond with Scott Collegiate

In the Hawaiian dialect, the word “makana” means “gift.”

For Shannon Fayant, that description fits Makana Henry to a T.

Fayant believes Henry — a defensive lineman who’s in his second season with the CFL’s Saskatchewan Roughriders — has been a gift to Scott Collegiate, where she is the principal.

Since December, Henry has been a fixture at the school, providing his time, his efforts and the lessons he learned as a troubled youth to Scott’s students.

“We were trying to define his influence in the school,” Fayant says. “He’s pretty much like that big brother, that cool uncle.”

“Throughout my life, things could have turned out way worse if there weren’t people who stuck by me and tried to help me,” adds Henry, a 30-year-old product of Toronto. “I thought, ‘I want to do the same thing.’

Henry has become more than that over the past nine months.

He has gone to the school and played basketball with the students over the lunch hour.

He helped set up tables for (and then dished out gravy at) Scott’s Christmas dinner.

He sold tickets to the school’s steak night and went from table to table during the evening to thank those in attendance.

He has taken students for lunch and provided tours of the Roughriders’ facilities at new Mosaic Stadium.

And this fall, he led a campaign that gave some 40 backpacks to every one of Scott’s Grade 9 students.

Henry enlisted the aid of some of his teammates to fill the bags with school supplies, athletic wear and other goodies. Henry then supplemented the backpacks’ contents with products that he bought himself.

“It shows his generosity, his commitment and his genuine nature to help our kids,” Fayant says of that drive. “I really, truly believe that.

“Some people do things like that for other reasons, but he just has that heart. He has interacted with the students in such a different way and related to them in a different way.

“He listens and he observes and then he thinks, ‘OK, what else could these kids need to help them with their education and their sports?’ ”

Henry’s efforts on behalf of Scott would seem to represent a gift for the man himself — one of redemption.

Henry was born Jan. 23, 1987, in Toronto to Phillip and Andrea Henry. Phillip died when Makana was an infant and Andrea spent the next few years moving around Ontario.

She eventually put her son in football, allowing him to start in the minor ranks in Brampton, Ont.

Makana improved so much that, when he was 14, an American prep school called and offered him a chance to play until finding him a university to attend.

“I couldn’t go at the time,” Henry recalls. “I was already caught up in trouble.

“I’ve been in trouble my whole life,” he continues. “I started off just being a bad kid. Then, when you get older — especially with my size — you attract a group of friends who want to benefit off you. They hang around you and then you get into the wrong crowd.”

He was expelled from high school in Grade 9, so he was homeschooled. He never graduated.

He went to jail for the first time as an adult when he was 18.

After nearly dying in a car accident in November of 2006 — “I was in a coma for a bit,” he says matter-of-factly — he was arrested a month later for drug possession and breach of probation.

Henry estimates he was arrested “four or five” times as an adult. He was behind bars three or four times, including a three-year stretch for forcible confinement and assault with a weapon. That sentence included prison time.

“It’s (crap),” Henry said of life behind bars. “It’s not somewhere where anybody wants to be. You don’t have your freedom and that’s the main thing.

“When you’re young, you do things. As long as you change is what matters.”

Henry played football throughout his tumultuous teen years and, by 2006, he was playing junior with the Burlington Braves.

He was one of the Braves’ better defensive players — he had eight tackles in the 2008 Canadian Bowl, when Vancouver Island (now Winnipeg Blue Bombers) tailback Andrew Harris rushed 32 times for 410 yards and four TDs in the Raiders’ 35-8 victory — and thought briefly about a career in the CFL.

“I knew it was a possibility,” Henry says. “But I was so caught up in another life at the time that I didn’t really care.”

His time behind bars seemingly ended those thoughts. After he got out — and after telling his former acquaintances that he was done with that life — he looked to get back into the game.

In the summer of 2016, the 6-foot-1, 270-pound Henry was playing flag football in Toronto when representatives of the GTA All-Stars saw him. He accepted an invitation to play for the semi-pro team, but got into just a couple of games before getting a phone call.

Roughriders head coach-GM Chris Jones was on the line, offering Henry a chance to play in the CFL.

“I thought it was a joke,” Henry recalls. “I had my own (stone masonry) company. I was doing some work building stuff at a car dealership and he called me at 7 o’clock in the morning.

“I didn’t know what to think. A couple of days later, I was on a plane over here and I never went back.”

One of Jones’ assistants, Craig Davoren, had coached Henry in Burlington. It was Davoren’s recommendation that earned Henry his shot in the CFL.

He signed with the Roughriders in August of 2016 and ended up recording five tackles in six regular-season games. He has appeared in 10 games so far this season, with 19 defensive tackle and two special-teams stops.

Not surprisingly, Henry looks at his second chance in the sport as a gift.

“I just want to make the best situation out of every day,” he says. “I put all I have into every day, whether it’s a practice or a game. If they call my name, I’m going to come running no matter what’s wrong with me.

“I’m trying to redeem myself because I always knew I should have made it somewhere,” he adds. “I’m sloppy now and I’m not as good as I was back then. I didn’t play football for a while, so I’m trying to learn and get better every day.

“But I’m still trying to wrap my head around it, too. I think I’m going to wake up one day and it’ll all be just a dream.”

In October of 2016, the Roughriders entered a three-way partnership with the Mosaic Company and the Mamaweyatitan Centre in North Central Regina. One of the centre’s service providers is Scott Collegiate.

When Roughriders officials met with Fayant to discuss the partnership and what the team could offer, she remembered her days at McDermid Community School and the regular visits of then-Roughriders linebacker Reggie Hunt.

When she mentioned she’d like to see a similar thing happen at Scott, Andrew Craig — the Roughriders’ manager of community relations — immediately thought of Henry.

When the idea was floated to Henry, he was on board. So was Fayant, who was told of Henry’s history.

“His past doesn’t dictate his now,” she says. “He is very aware of his past and the influences that he faced. He had choices to make as a young man — influences within our own families, our own structures and our own community — and he chose a different path.

“He talks openly to the students about it, but it’s not THE story. His story is, ‘You guys can do whatever you put your mind to and you can fulfil anything.’ He understands the choices and the importance of making a different choice so that he can have a different life.

“Just by spending time with them and in a different manner, he’s able to influence them to make positive choices.”

Henry feels he can relate to the students of Scott, but he doesn’t view himself as a role model — even though he’s a shining example of someone who has made something of himself despite a checkered past.

In his mind, what’s done is done.

“Everybody goes through life differently,” Henry says. “I know a lot, I’ve lived a lot and I’ve met a lot of people. It’s life. Would I take back some of the things I did? Yeah, sure. But I had to grow up how I grew up and learn how I learned …

“The kids (at Scott) are young still, so for me to talk about the past in certain detail might seem like I’m glorifying it to them and I don’t want to portray that to them. That’s old; that’s my past. I tell them, ‘Yeah, I’ve been in situations. But this is what I’m trying to achieve now.’ ”

Fayant made it clear to the Roughriders that she didn’t want to see the students at Scott disappointed by the relationship. The player who was chosen couldn’t just show up every now and then; he had to be fully engaged.

Henry has been that — and more.

Dwight Laframboise, who’s now in Grade 12, obviously made an impression on Henry on the basketball court.

This season, Henry wants to take a video camera to some of Scott’s games to film Laframboise in hopes of getting him some recognition — and possibly a scholarship.

Laframboise, who calls Henry “a sports mentor,” says that kind of action typifies what Henry means to Scott.

“It’s really nice to have someone like him helping out little guys like us in our community,” Laframboise says. “We have someone to look up to.”

The Roughriders’ practice and game schedule limits Henry’s availability during the season, but he does what he can when he can.

He has lived up to Fayant’s expectations for the player-school relationship and has adopted the school. The reverse holds true as well.

“In Indigenous culture, we adopt people who are very endearing, who we’re close to and who we have relationships with,” Fayant says. “That’s where we wanted to go with this; we wanted to adopt this person.

“But you don’t get adopted in Indigenous culture just because. You have to prove yourself. If you come in, you don’t just do something and then fly out. We have to know that you’re there for the long haul — and Mak is.”