Notebook: Anthony Allen is back in green and white 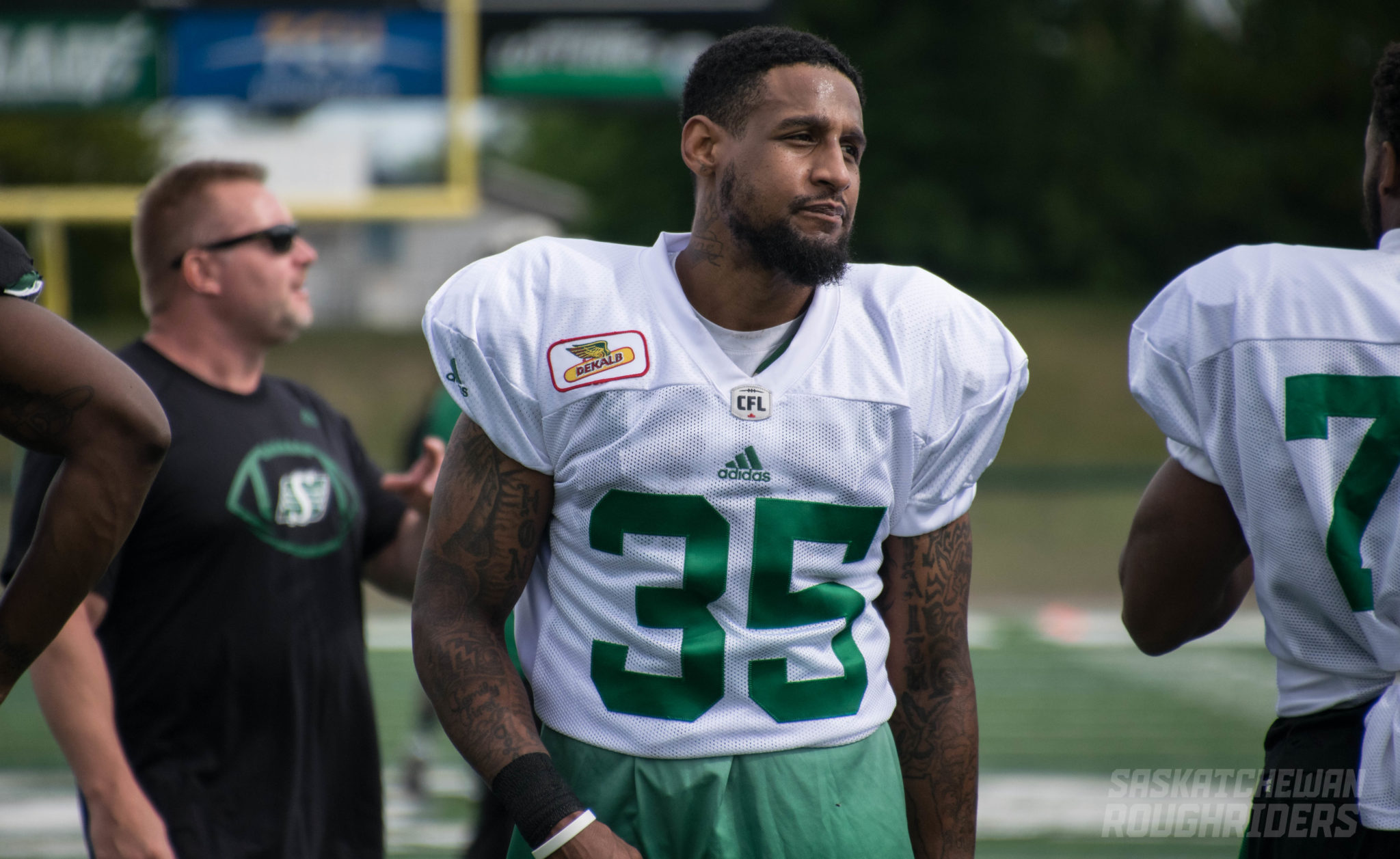 Notebook: Anthony Allen is back in green and white

The 28-year-old running back, who spent the 2014 and ’15 seasons with the Saskatchewan Roughriders, re-signed with the CFL team. He was resplendent in the club’s apparel when he met the media after his first training-camp session with the Roughriders at Saskatoon Minor Football Field.

“I didn’t have to do any extra shopping,” Allen told reporters while discussing his wardrobe. “I already had a lot of green and white at the house, so I just packed my bags with what I had from before and came on through.”

Allen spent two seasons with the Roughriders before joining the B.C. Lions in 2016. He became a free agent Feb. 14 and was sitting at home in Miami waiting for his phone to ring.

When Roughriders assistant vice-president of football operations and administration Jeremy O’Day called earlier this week and asked if Allen was in shape and ready to play again, the 6-foot-1, 220-pound tailback said he was.

“I was just sitting back being regular,” Allen said. “I finally got a chance to be a superhero again, so I’m like, ‘Let’s do it.’ ”

Allen joins Cameron Marshall and Quincy Walden in Saskatchewan’s stable of international tailbacks. Canadians Kienan LaFrance and Greg Morris also are in the mix for the starting tailback spot.

Allen, who rushed 261 times for 1,504 yards and eight touchdowns in 28 career games with the Roughriders, believes he has a legitimate shot at winning the No. 1 job in camp.

“I wouldn’t have answered the call if I didn’t think I’d be able to come back,” he said. “We have a lot of good backs here. I’m just looking forward to competing with them and taking the starting job if I can.”

Allen noted that Saskatchewan was his “favourite place to be,” so he’s grateful for another opportunity to play for the Roughriders. Asked Friday if he ever thought he’d be back, he admitted he didn’t.

“I was cleaning out my house and getting rid of a lot of the green stuff,” Allen said. “I was like, ‘Let me keep some green stuff just in case,’ and lo and behold, here I am. I’m glad I kept the hat.”

Rookie linebacker Gary Wilkins, who injured his knee Tuesday, was released to free up a roster spot.

Zavian Bingham got a pretty important call himself Friday.

The rookie defensive back got word on the field before practice that his girlfriend had delivered a baby boy, Zavian Jr. The proud papa took the call on the turf at SMF Field and met his son through the miracle of modern technology.

“He asked me if I wanted to go back or if I wanted to keep working. I was in between, but I decided I’d keep working and get my job and I could Facetime whenever she had the baby. (Jones) was like, ‘OK, bring your phone to practice and if they call, just sit on the side and watch it.’ That’s what we did.”

Bingham told his teammates the news as they huddled after their stretching period. The news was greeted with a cheer.

The head coach said he thought Friday “was probably our worst day so far” on the field and he let his charges know that.

“We seemed really lethargic (and) didn’t seem near as fast as what we have the last few days …,” Jones said.

“You usually have (a letdown) Day 3 or Day 4. We’re here at whatever day it was — 6 — and they finally flattened out a little bit. We’ll come back and keep pushing them.”

Ironically, Jones blamed himself and his staff as much as he did the players for the sluggish practice.

“As coaches, we’ve got to do a better job of getting out there and having more energy ourselves,” he said. “When our guys don’t have the energy, we’ve got to bring it for them.”

Fullback Spencer Moore and defensive end Willie Jefferson — both of whom missed Thursday’s practice — were back on the field Friday.

Guard Brendon LaBatte and defensive back Ed Gainey — both of whom left Thursday’s practice early — were absent Friday.

EXTRAS: Quarterback Vince Young turned in one of the plays of the day, lofting a perfect pass to rookie receiver Ahmad Fulwood for a 35-yard touchdown … Asked after practice how he thinks he has done in his first CFL training camp, Young was low-key. “I’m not to the point of grading myself right now,” the former NFL pivot said. “Right now, I’m just trying to continue to work and trying to make a step forward every day.” … Training-camp practices will help the coaches set the Roughriders’ roster, but the pre-season games will be significantly more important. “The games are where you decide a lot of your players,” Jones said. “We’ve had a lot of guys who have been good practice players in the past and then you turn the lights on and they resemble me playing, which is not a good thing.”