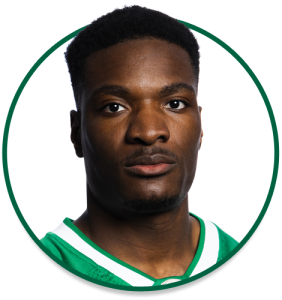 ACQUIRED: Signed with the Riders in 2021

PRO:  Selected in the first round, second overall, of the 2021 CFL Draft. Missed the 2021 season due to injury.

COLLEGE:  Comes off a sensational 2019 season at the University of Saskatchewan, winning the Presidents’ Trophy as the country’s most outstanding defensive player. Made 39 tackles, six tackles for loss, three sacks, five interceptions – two of which he returned for touchdowns, four pass breakups, and one forced fumble that season. Named Canada West’s Most Outstanding Defensive Player, a Canada West All-Star and a U SPORTS First-Team All-Canadian. Made 115 tackles,10 interceptions, six tackles for loss, three sacks, and two forced fumbles in 30 career games with the Huskies. Named the Huskies’ Rookie of the Year and helped the team win Hardy Cup in 2017, bringing it back to the University of Saskatchewan for the first time in 10 years.