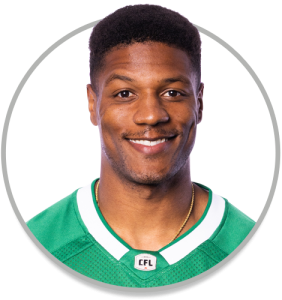 ACQUIRED: Signed with the Riders in January 2018.

PRO: Re-signed the Riders in December 2020. Selected by the New York Jets in the 4th round (115th overall) of the 2014 NFL Draft and spent time with the NFL’s Dallas Cowboys, New England Patriots and Jacksonville Jaguars before joining the Riders in 2018.  In 2019, he started in 18 regular-season games, had a team-leading 1334 yards on 72 receptions and five touchdowns.  Evans was named a CFL West Division All-Star and CFL All-Star.

COLLEGE: Spent four seasons at UCLA (2010-13) playing in 40 career collegiate games with the Bruins collecting 126 receptions for 1,895 yards and 14 touchdowns.  While at UCLA, Evans received All-Conference Honourable Mention in 2013.  He started off his collegiate career at Notre Dame playing in six collegiate games with the fighting Irish with seven interceptions for 61 yards.  In 2010, Evans transferred to UCLA and sat out the 2010 season due to NCAA transfer rules.