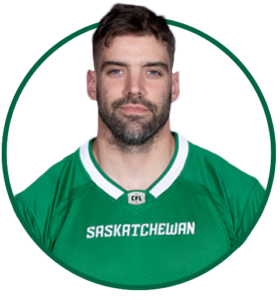 ACQUIRED: Signed with the Riders in October 2018.

PRO: Traded to the Montreal Alouettes in January 2018  and was later traded to the Riders in October 2018.  He was first selected by the Alouettes in the 2nd round (11th overall) of the 2012 CFL Draft and then was selected by the Ottawa Redblacks in the 2013 CFL Expansion Draft. Lavoie was sidelined for the 2019 season due to an injury, but was able to play in the Western Final against Winnipeg.

COLLEGE: Spent four years at Laval University (08-11) where he played in 25 games and won the Vanier Cup in 2008 and 2010.  Throughout his collegiate career he rushed 30 passes for 374 yards and scored nine touchdowns. In his final year with the team, he caught eight passes, scored three touchdowns and recorded 7.5 special team tackles.