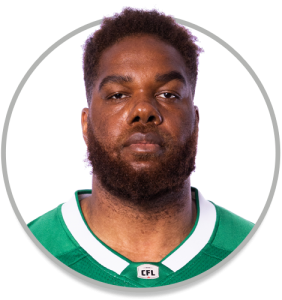 ACQUIRED: Signed as a free agent in February 2020.

2021: Played in all 14 games last season for the Green and White, making one start at left guard. Also saw action in the West Semi-Final and the West Final.

PRO: In 2019, he spent time on the Edmonton Eskimos and dressed for the East Final against Hamilton. The 27-year-old also spent time with the Toronto Argonauts and B.C. Lions.  Prior to joining the Eskimos, he spent three seasons with the Riders appearing in 22 games for the Green and White.  St. John was selected first overall in the 2016 CFL Draft.

COLLEGE: St. John spent three seasons at the University of Oklahoma where he appeared in 15 games. As a senior, St. John had four starts in seven conference games.