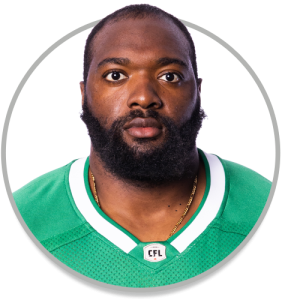 ACQUIRED: Signed with Riders in March 2022.

2021: Played in 9 games, started all 9 at right tackle. Suffered a quad injury and missed the remainder of the season. Argos nomination for the Jake Gaudaur Veterans’ Award, recognizing a CFL player who demonstrated the attributes of Canada’s veterans: strength, perseverance, courage, comradeship and contribution to Canadian communities.

PRO: was selected by the Toronto Argonauts in the third round, 22nd overall, of the 2016 CFL Draft and went on to play six seasons with suiting up for 59 games. Cracked the starting lineup for the first time in 2019, starting the final 11 games of the season at right tackle and all nine games he played in 2021. Scored his first career touchdown – a one-yard reception – on August 1, 2019 and won the Grey Cup as part of the Argonauts in 2017.

COLLEGE: Played in 27 games over 4 seasons at York University. Moved from defensive line to offensive line in his third year. Played in the 2015 USPORTS East-West Bowl. Impressed at the 2016 CFL Combine where he led all offensive lineman in several categories with a 4.98 40-yard dash, 7.41 three-cone drill, 4.78 short shuttle, 31” vertical jump and 8’11.75” broad jump.