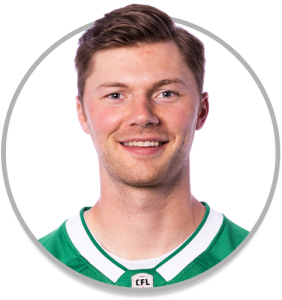 ACQUIRED: Signed by Riders in February 2022

PRO: Dolegala was signed by the Cincinnati Bengals as and undrafted free agent in 2019 and spent the entire season on the active roster. He played in two pre-season games with the Bengals and completed 37 passes for 347 yards and two touchdowns. He also spent time with the New England Patriots, Green Bay Packers, and Miami Dolphins.

COLLEGE: Dolegala attended Central Connecticut State University, where he played 44 games over four seasons. During his career as a Blue Devil, he completed 654 passes for 8,129 yards, 48 touchdowns and 24 interceptions while adding 452 rushing yards and 18 touchdowns. He left the school as the all-time leader in passing yards and touchdowns and the fifth quarterback in the Northeastern Conference to throw for over 8,000 career yards. In his senior season, he was a First Team All-Northwestern Conference selection.