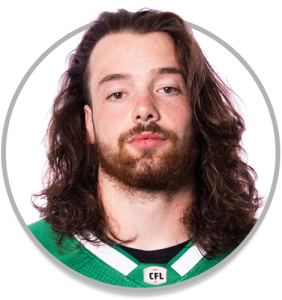 ACQUIRED: Signed with the Riders in November 2021.

2022: Saw action in 8 games, recording three tackles, including one tackle for loss.

PRO: Re-signed with the Roughriders in December of 2021 after initially signing with the Club in November. Attended training camp with the Bombers in 2021 and played in four games making one special teams tackle.

COLLEGE: Began his collegiate career playing for his hometown University of Regina Rams. As a freshman, he was named the 2016 Canada West Rookie of the Year, recording 30 tackles, four sacks and an interception. In his next season, he was named a Canada West all-star, earning 26 defensive tackles and 6.5 sacks. In 2018, he left the Rams to play for the BCJFL’s Okanogan Sun and was named an all-star after an eight-sack season. He returned to university football in 2019, suiting up for the University of Saskatchewan Huskies where he made 24 defensive tackles, six sacks and one interception before entering the 2020 Draft.