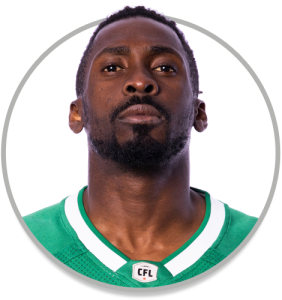 ACQUIRED: Signed with the Riders in May 2017.

2021: played in five regular-season games at safety, making 11 defensive tackles and one forced fumble before be sidelined with an injury.

PRO: Signed with the B.C. Lions as a free agent in February 2016 after spending time with the Hamilton Tiger-Cats and Montreal Alouettes.   Edem was selected by the Montreal Alouettes in the 1st round (3rd overall) of the 2013 CFL Draft. In 2019, he started in 18 regular-season games and the Western Final.  He had a career-high 69 defensive tackles, added seven special-teams tackles, three sacks and one forced fumble return.