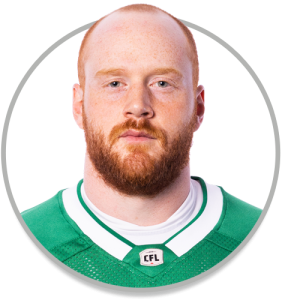 ACQUIRED: Signed with the Riders in May 2018.

2021: Teitz had a breakout year in 2021, leading the team in defensive tackles. He played in 13 regular-season games, making a career-high and team-high 64 defensive tackles. He also added seven special teams tackles and three sacks and suited up for the West Semi-Final, earning five tackles on the road to being named the Riders’ Most Outstanding Canadian.

PRO: Selected in the 2nd round (14th overall) of the 2018 CFL Draft. In 2019, he played in 16 regular-season games and registered six defensive tackles and 11 special-teams tackles.

COLLEGE: Spent four seasons at the University of Calgary (2014-17) playing in 30 regular-season collegiate games with the Dinos.  Teitz had 111 unassisted tackles, 14.5 tackles for loss and seven quarterback sacks.  He won back-to-back Hardy Cup titles as Canada West champions in 2016 and 2017 and played in the 2017 U Sports East-West Bowl.  The Calgary native was named Canada West All-Star in 2015 and 2017 and named U Sports All-Canadian in 2015.