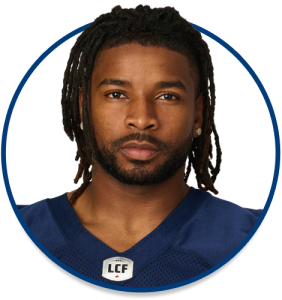 ACQUIRED: Sent a sixth-round pick in the 2023 CFL Draft to Montreal for Alford in July 2022.

PRO: In 2019, Alford saw action in three games for Montreal. He had nine punt returns for 218 yards and two touchdowns and six kick returns for 117 yards. Prior to the Alouettes, he played six games for the Toronto Argonauts, making seven catches for 57 yards and earning 170 yards off eight kickoff returns.

COLLEGE:  Collegiately, the Georgia native played two seasons at West Virginia (2013-14), suiting up for 22 games as a Mountaineer. He caught 92 career passes for 1,497 yards and 13 receiving touchdowns. He also returned 37 kickoffs for 972 yards (26.3-yard average) and two touchdowns. In 2014, he led the entire NCAA in return touchdowns with two and he led the Big-12 in receiving touchdowns with 11. Prior to attending West Virginia, Alford was a running back with the Georgia Military Bulldogs (2011-12) and in his second season led the team with 541 yards rushing and six touchdowns.