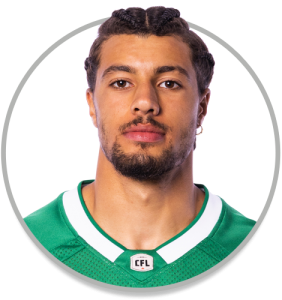 2022: Schaffer-Baker had a stellar sophomore season in the Green and White, setting new career-highs across the board with 68 catches for 960 yards and five touchdowns. Schaffer-Baker finished the season 11th in the CFL and second out of all Canadian wideouts in receiving yards. He also contributed in the running game, taking 13 handoffs for 74 yards. He was named a CFL Top Performer in Week 12 and was the Riders nominee for the Most Outstanding Canadian Award.

PRO: Selected by the Riders in the fourth round (30th overall) of the 2020 CFL Draft. Schaffer-Baker saw action in 12 games for the Green and White in his rookie season. His 47 receptions and 563 yards were both the second most on the team. He also hauled in two touchdowns and was named the Roughriders Rookie of the Year for his efforts.

COLLEGE: Spent four collegiate seasons at the University of Guelph. Played in 28 games recording 95 receptions for 1,544 yards and eight touchdowns. Impressed at the 2019 East-West Bowl where he led all receivers with five catches for 126 yards and a touchdown.