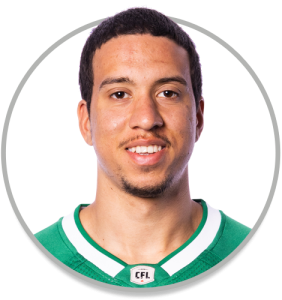 ACQUIRED: Signed with the Riders in May 2019.

2021: Saw action in three games for the Green and White, recording five catches for 83 yards while averaging 16.6 yards per reception.

COLLEGE: He spent three seasons with the Arkansas State University hauling in 115 catches for 1,577 yards and 10 majors.  In 2018, McInnis was second on his team with 56 receptions for 694 yards and six touchdowns.  He went to junior college at Dodge City and in his freshman season he had 49 receptions for 964 yards and seven touchdowns.  McInnis was heavily recruited out of junior college with offers from Mississippi State, Nevada, South Alabama and Southern Mississippi before settling at Arkansas State.