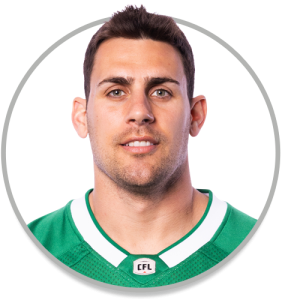 ACQUIRED: Signed with the Riders in March 2017.

YEARS WITH THE RIDERS: 8

PRO:  In May 2015, Hus’ CFL rights were acquired by the Riders from the Edmonton Eskimos. He then signed with the Riders in May 2015.  He previously spent time with the NFL’s Kansas City Chiefs, St. Louis Rams and Seattle Seahawks.  Hus was originally selected by Edmonton in the 4th round (31st overall) of the 2013 CFL Draft. In 2019, he played in 18 regular-season games and the Western Final as the team’s long and short snapper and collected two special-teams tackles. Signed a two-year contract extension in December 2021. Played all 14-games plus two playoff games at long snapper in the 2021 season.

COLLEGE: Played three seasons at the University of Regina (2010-12) as the team’s long snapper but also played linebacker.  Hus played in 23 career collegiate games, totaling 34.5 tackles and a blocked punt.