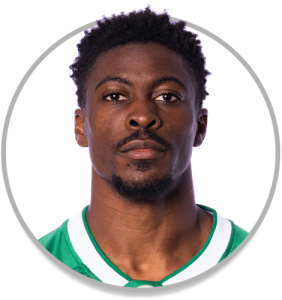 ACQUIRED: Signed with Riders in December 2022.

PRO: Signed with the Houston Texans as an undrafted free agent in 2018 and went on to spend time on the practice rosters of the Washington Commanders and the Chicago Bears. As a member of the Commanders, he dressed for one regular season game.

COLLEGE: Weah spent five collegiate seasons at the University of Pittsburgh, where he contributed on special teams early on, before having a breakout season as a junior in 2016. He played in 13 games and led the team in receptions (36), receiving yards (870) and touchdowns (10) that season, averaging an incredible 24.2 yards per catch – the best in the ACC and the second-best average nationally. As a senior, he played 12 games making 41 receptions for 698 yards and four touchdowns, with three 100+ yard games. In addition to his accomplishments on the field for Pitt, Weah was voted a team captain by his teammates and was selected to play in the 2018 East-West Shrine Game.