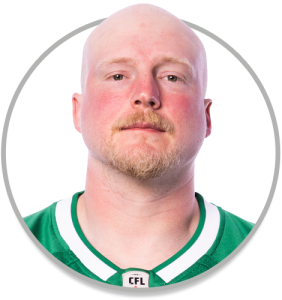 ACQUIRED: Signed with the Riders in January 2022.

2021: Suited up for all 14 regular season games contributing on both offence and special teams.

PRO:  The Canadian fullback has played a total of 72 career CFL games, earning 52 special teams tackles and two forced fumbles, while adding three receptions for 45 yards and one carry for five yards. Tuck was selected by the Montreal Alouettes in the fourth round, 31st overall, of the 2014 CFL Draft and also played for the Winnipeg Blue Bombers and the Toronto Argonauts.

COLLEGE: Attended York University from 2010-2013 lining up at linebacker and defensive end. He played in 26 games over four collegiate seasons, earning 108.5 tackles, 11 sacks, 15.5 tackles for loss and two forced fumbles. In 2012 and 2013, he won the Nobby Wirkowski Defensive MVP Trophy as the Lions most valuable defensive player and played in the 2013 East-West Bowl.