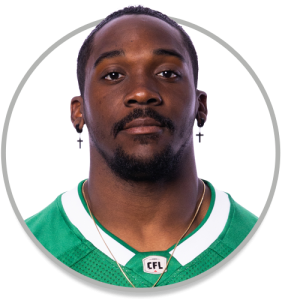 ACQUIRED: Signed with Riders in April 2022

2022: Saw action in 13 games, making four starts. Hickson finished 6th in the CFL with 533 yards on 85 carries, while adding one rushing touchdown. He also recorded 17 receptions for 109 yards and seven kickoff returns for 168 yards. Hickson was the Riders nominee for the CFL’s Most Outstanding Rookie Award.

COLLEGE: Hickson spent five collegiate seasons at Liberty University (2015-19), playing in 47 games for the Flames. Over that time, the Virginia native earned 610 carries for 2,898 yards and 30 touchdowns. Hickson became the first Liberty running back to rush for 1,000 yards in consecutive seasons in more than a decade. He finished his collegiate career as the program’s all-time leader in all-purpose yards with 4,494 and having earned Phil Steele’s Independent All-Conference First-Team honours as a senior. Prior to his breakout junior season, Hickson contributed as a returner, where in his first season on the field he earned 707 total kickoff return yards (the second most in program history) and averaged 25.2 yards per kickoff return (ranking second in the Big South). His strength as a returner saw him named Big South second-team all-conference in both his freshman and sophomore seasons.