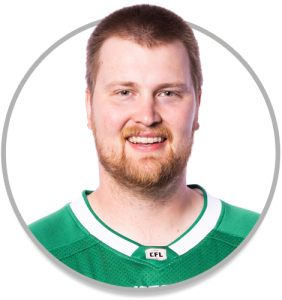 ACQUIRED: Signed with the Riders in February of 2021.

PRO: Signed with the Riders on the first day of free agency in February of 2021. Played three seasons with the Ottawa REDBLACKS. Selected by Ottawa in the first round (9th overall) in the 2017 CFL Draft. Johnson went on to start as a rookie and played 44 games and the 2018 Grey Cup. Played all 14 regular-season games plus two playoff games at right guard in the 2021 season. Signed a contract extension in December.

COLLEGE: Played his collegiate career at the University of Saskatchewan. As a senior, he was named a Canada West All-Star and U Sports Second Team All-Canadian, helping the Huskies Offence average 32.6 points per game and 434 yards per game.