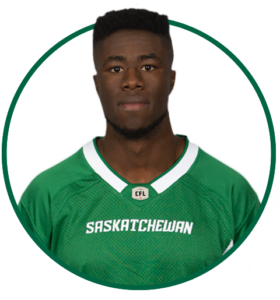 ACQUIRED: Signed with the Riders in April 2019.

PRO: Resigned with the Riders in December 2019. Signed with the Philadelphia Eagles in January 2018 after signing with the Riders in September 2017.  Bouka signed with the Arizona Cardinals as an undrafted free agent in May 2016. He entered the CFL in 2016 after he was selected by Saskatchewan in the 3rd round (24th overall) of the 2016 CFL Draft.  In 2019, Bouka played in 18 games recording five defensive tackles, three special teams tackles, one interception and played in the Western Final.

COLLEGE: Spent four seasons at the University of Calgary (2012-15) and played in 19 collegiate games as a receiver before moving to defensive back in 2013.  He had 16 receptions for 309 yards and two touchdowns, added 18 punt returns for 186 yards and six kickoff returns for 137 yards.  Bouka also had 24.5 defensive tackles and one interception.