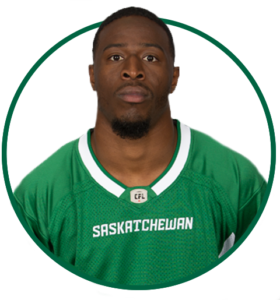 ACQUIRED:  Signed with the Riders in February 2022.

2022: Moncrief started for 17 games this season for the Green and White and recorded 49 defensive tackles, one special teams tackle, and four interceptions en route to being named a CFL West Division All-Star for the second time in his career.

PRO: Moncrief spent the 2021 season with the Edmonton Elks, seeing action in nine games. He finished the season with 23 tackles, four sacks and one special teams tackle. Moncrief started in 17 regular-season games and the Western Final during the 2019 season. He collected a career-best 69 defensive tackles, four special teams tackles, four quarterback sacks, two tackles for loss, one forced fumble and three interceptions. Played 13 games in 2018 for the Riders, finishing the season with 43 tackles and an interception. Made his CFL debut Week 8 of the 2017 season vs. B.C. Appeared in Saskatchewan’s final six games of the regular season, and both the Riders’ East Division playoff games. Recorded a forced fumble in Saskatchewan’s East Division semifinal win vs. Ottawa.