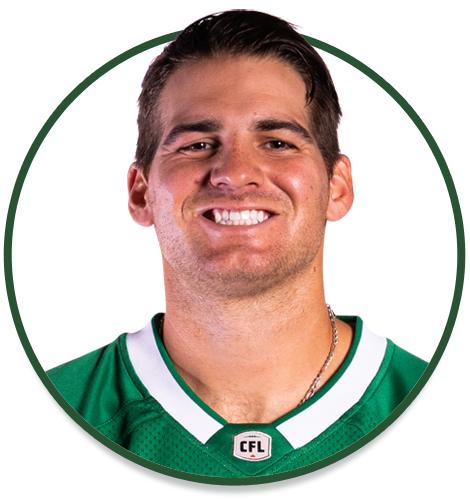 ACQUIRED: Signed with the Riders in February 2019.

2021: Started 13 regular-season games, throwing for 2,970 yards and 14 touchdowns. Added 468 yards rushing and four touchdowns on the ground. Started both the West-Semi Final and West Final, adding another 464 yards passing and two touchdowns as well as 110 yards rushing and one touchdown. Named the Roughriders’ Most Outstanding Player.

PRO: Signed an extension in January 2021. Re-signed with the Riders in October 2019.  Signed with the B.C. Lions as a free agent in February 2018 after spending time with the Toronto Argonauts. Fajardo played in 18 regular-season games as a backup quarterback for the B.C. Lions completing 14 of 20 pass attempts for 153 yards and one touchdown. In 2019, Fajardo became the starting quarterback for the Green and White. He led the league with 4,302 passing yards, threw for 18 touchdowns and added an additional 611 rushing yards and 10 touchdowns.  Fajardo was named a West division All-Star, a CFL All-Star and named the West Division’s Most Outstanding Player.

COLLEGE: Spent four seasons at the University of Nevada (2011-14) playing in 45 career collegiate games.  While there, he completed 878 of 1,348 pass attempts (65.1%) for 9,659 yards and 57 touchdowns and added 636 carries for 3,482 yards and 44 touchdowns. Fajardo was named second-team All-Mountain West in 2012 and the Western Athletic Conference’s Freshman of the year in 2011.  He became just the second player in FBS history to reach 9,000 yards passing and 3,000 yards rushing in career, joining Nevada alumni Colin Kaepernick.