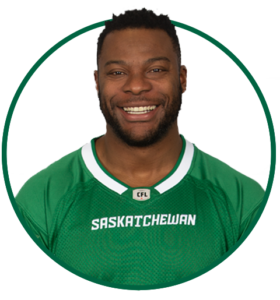 ACQUIRED: Signed with the Riders in February 2018.

PRO: Signed with the Calgary Stampeders in September 2009 and signed with the Philadelphia Eagles in January 2009 after a playing with the Stampeders in June 2008. In 2019, he started in 17 regular-season games and played in the Western Final at defensive end.  He led the league with 16 quarterback sacks, registered 50 defensive tackles, four forced fumbles, three tackles for loss and two fumble return for a 45-yard touchdown.  He had five defensive tackles, one quarterback sack and one tackle for loss in the playoffs.

COLLEGE: Spent four seasons at Northwood University (2003-06) registering 372 defensive tackles and six interceptions. Hughes was named AFCA First-Team All American and GLIAC Defensive Back of the Year in 2006.