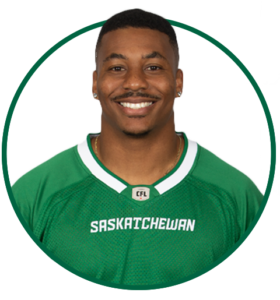 ACQUIRED: Signed with the Roughriders in September 2019.

PRO: Resigned with the Riders in December 2019.  Signed with the Alouettes in June 2019, the Riders in April 2018 and attended mini-camp with the NFL’s San Francisco 49ers in 2017. In 2019, he played in six games recording nine defensive tackles, two special teams tackles and three sacks.  Geter played in the Western Final against Winnipeg and collected two special teams tackles.

COLLEGE: Spent five seasons at Gardner-Webb University (2012-16).  While there, Geter had 203 solo tackles, 142 assists, 35.5 tackles for losses, 10.5 sacks, five forced fumbles, three interceptions and two fumble recoveries in 47 collegiate games.  He was named an All-Big South Conference performer three times in his career and was selected as an FCS All-American after the 2016 season.