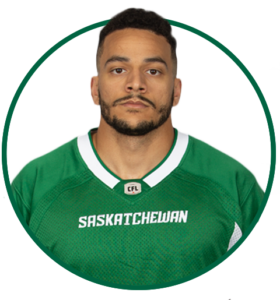 ACQUIRED:  Signed with the Riders in June 2017.

PRO: Selected by Saskatchewan in the 5th round of the 2017 CFL Supplemental Draft.  In 2019, Bartlett made two special-teams tackle in six regular-season games before he was sidelined by a season ending injury.

COLLEGE:  Bartlett spent the 2013 season at North Dakota State College of Science playing in 10 games, registering 80 defensive tackles and one interception.  He then moved on to Tusculum where he spent three seasons playing in 31 career collegiate games for the Pioneers.  While there, he collected 224 defensive tackles, nine tackles for loss, six forced fumbles and four quarterback sacks.  Bartlett was named 2015 All-South Atlantic Conference First Team.