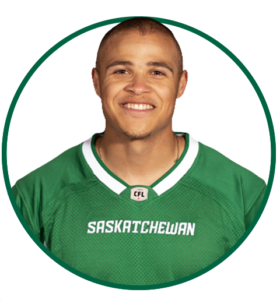 ACQUIRED: Signed with the Roughriders in October 2019.

PRO: Simon was selected in the sixth round of the 2018 CFL Draft by the Calgary Stampeders.  He spent the 2019 season on the Riders practice roster and resigned in December 2019.

COLLEGE: Simon had a strong USPORTS career and was the star running back for the University of Regina Rams. His five-year collegiate career saw him become the school’s all-time leader in rushing yards, rushing touchdowns, and touchdowns scored. Simon accumulated 3295 rushing yards, 22 rushing touchdowns over his time at the U of R. Simon also caught 64 passes for 727 yards and nine touchdowns. His career total of 4134 all-purpose yards ranks second to former Roughrider fullback Neal Hughes in University of Regina history.