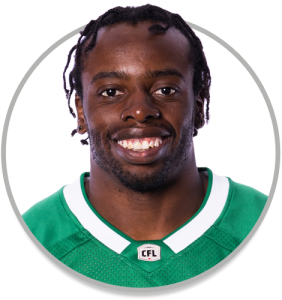 ACQUIRED: Signed with the Riders as an undrafted free agent in May 2017.

YEARS WITH THE RIDERS: 6

PRO: Resigned with the Riders in January 2020.  In 2019, Awachie played and started in 12 regular season games making two receptions for 12 yards and was an intergral part of the Club’s special-teams success. Played 12 games in 2021, contributing on special teams and offence.

COLLEGE:  The Toronto native spent three collegiate seasons with the University of Toronto and played in 22 games.  He was a receiver for his first season before making the switch to defensive back in the middle of the second season.  In his final, he dressed in all eight games and was ranked third on the team with 13 receptions for 134 yards recording six tackles.