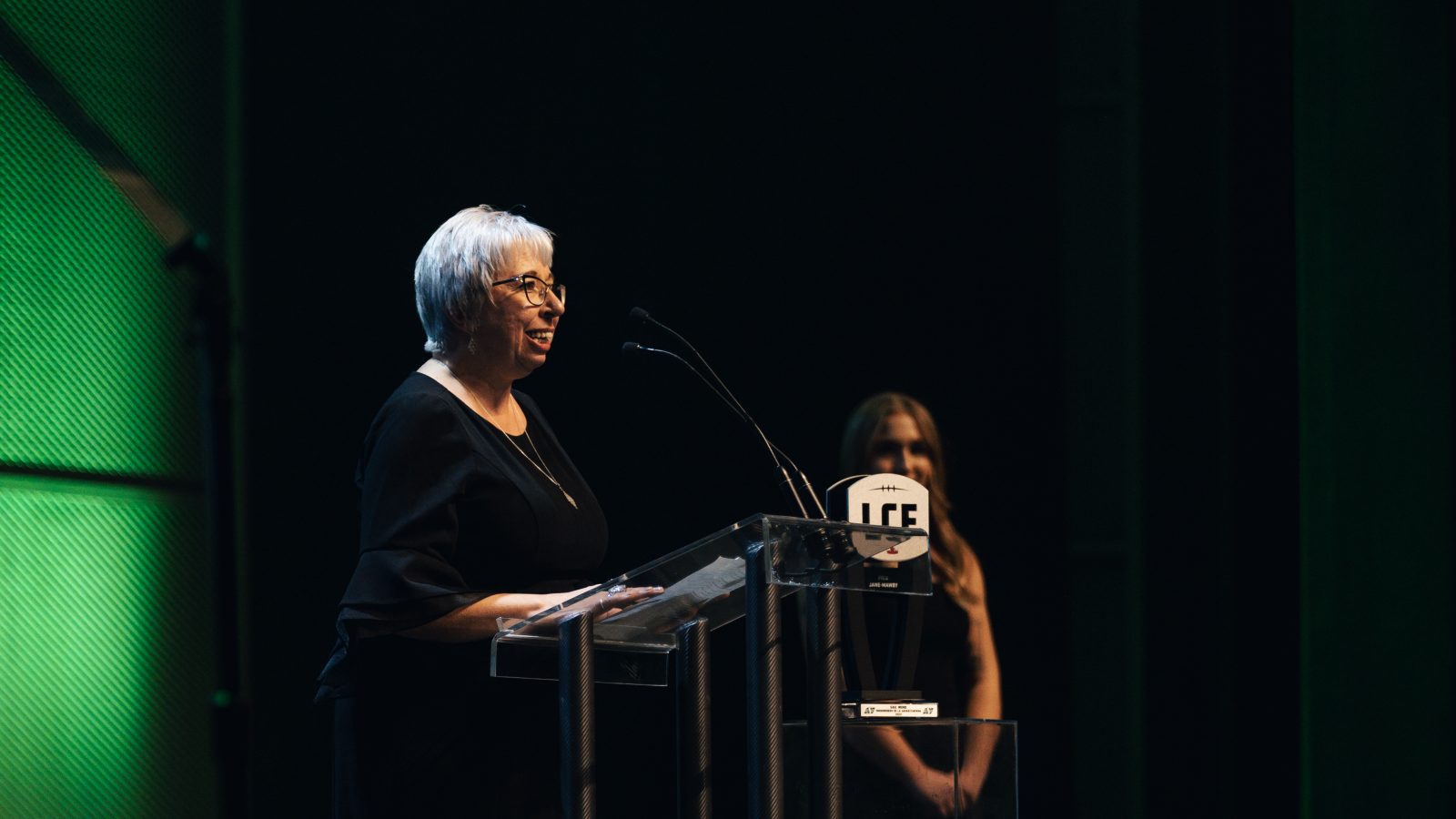 “You had to weigh the remaining paper tickets and subtract that from the total weight. We were pretty accurate with that, you know,” said Mund, laughing.

All that has changed in large part because of Mund, who brought the Riders into the 21st century starting with the club’s first ticketing system in 2000.

“I inputted all 4,000 paper accounts by myself and had the team do triple and quadruple checks,” said Mund, the Riders current director of ticket operations. “There wasn’t a lot of technology with the club, so I really drove those initiatives.”

Through nearly 27 years, Mund has ushered in numerous technological advancements – including the paper to digital ticket evolution – while always maintaining a focus on Saskatchewan fans.

For her remarkable work, Mund was named the 2022 recipient of the Jane Mawby Tribute Award at the 2022 CFL Awards in Regina Thursday night. The award honours a highly-valued, yet too often ‘unsung’ current employee at the club and league level.

“You wear so many different hats. No two days are alike and it’s always fun – even at the worst times. It’s a passion for people,” Mund said about her role.

“It’s not something you grow up thinking that you would do, so I have to say I got very lucky.”

Mund, who had completed an architecture program and was a technologist by trade, took a job in ticketing at Regina’s Globe Theatre when she couldn’t find work in her desired fields.

“They say once you get into the ticketing world, if you love it, you won’t do anything else,” she said.

Mund was with the theatre eight years until joining the Riders in March 1996. A public announcement of her hiring was published in the Regina Leader-Post, which her father clipped and kept in his wallet.

“He always used to say, ‘I couldn’t be more proud. I may not have a son that would play for the team, but I have a daughter who works there’,” Mund recalled, tearing up.

It was an exciting time for the young woman from Langenburg, Saskatchewan, who had grown up only ever watching Roughriders games on television. But less than a year into her new job, the club was in turmoil – a large loan was being called in and the Riders didn’t have the cash.

“That would have been our demise at that point in time. So we knew we had to raise a certain amount of money,” Mund said.

In total, 20,000 flex ticket packs needed to be sold to save the team.  An “astronomical” task, Mund said, considering there were only around 4,000 season ticket holders at the time.

“I didn’t see my family for a long time,” she said with a laugh. “I would go and sell tickets in communities, be it at a pancake breakfast or a cabaret or whatever it was. I showed up and took money.”

The grassroots effort, which included a volunteer network of Rider Representatives, came to a head with a major 12-hour Tickethon broadcast live on television. Through sheer will and determination, every one of the 20,000 flex packs were sold.

“I don’t know at what point in time we actually hit it, but I remember not getting home until late because we knew we had a club,” she said.

“We went from saving the Riders to going to the 1997 Grey Cup. It was just a wild year and I have to say, happily, we never really looked back.”

Mund has been crucial to the club’s forward progress ever since. She introduced and developed best practices for ticketing, volunteers, security, customer service, accounting and HR. She helped transition the Riders to internet sales, the very first in 2003, and brought in the club’s first banking machines.

There’s also her work with volunteers and countless other initiatives that made Rider Nation what it is today.

Mund said she’s incredibly proud of navigating the successful move from old Taylor Field to new Mosaic Stadium. Most recently, the 60-year-old was involved in the creation of a new premium seating area inside the venue, called The Terrace.

“What I love is that we were actually a bit of a forerunner in Canada on some of that, because the Toronto Blue Jays just announced their lovely spaces that are very similar,” she said.

Throughout her tenure, Mund only ever missed working three game days – one of which was to finally experience the event as a fan in the stands. She plans to attend more games after she retires in March, fulfilling 27 years of service.

“I’ve got such great staff that I feel like I’m leaving it in a good way, with a good foundation. Sometimes that’s a good way to go out,” she said, smiling.

McKay worked with the club for 21 years and was the Riders manager of facilities and stadium when he died suddenly in August 2019. He’s remembered as an unsung hero who lived and loved the Saskatchewan Roughriders.