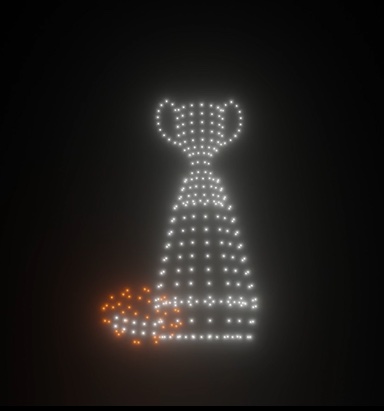 We are so excited to bring a very special, unique and free event to the 2022 Grey Cup Festival that will take place at the nightly conclusion of the NexGen Street Festival on November 17-19. Every night, at 9:00 p.m., the night sky above the Festival will be illuminated by 300 drones working in formation to create a brilliant light show –  the largest drone show ever flown in Canada.

For approximately 10 minutes, the drones will take the audience through a story with spectacular visuals and sounds that will push the boundaries of what you thought was possible with drone technology. Like watching a movie in the sky, each scene will smoothly transition into the next.

The story will start with a depiction of Turtle Island, a creation story from Indigenous oral histories. The audience will see a massive turtle with the world on its back moving in the sky before it morphs into dancing northern lights. As the show keeps moving, the drones will highlight all nine CFL teams and their markets and will bring the audience together as football fans. Finally, the sky will display the core reason we are all here: The Grey Cup.

The show will be sure to evoke a feeling of pride, passion and excitement for an audience of all ages.

The drones will take off from the roof of the Queensbury Convention Centre and the best view to fully experience the show will be from Confederation Park. The display is put on by North Star Drone Shows and it is sure to be massive, as some drones will reach heights of 400ft in the air!

The show is weather permitting and will be a great stop in between the NextGen Street Festival and the Team Party Rooms!