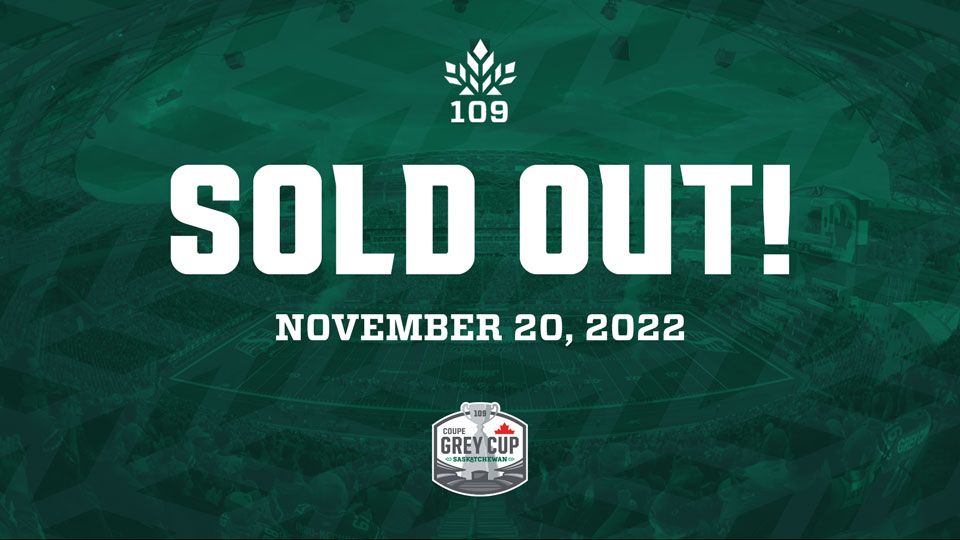 The Saskatchewan Roughriders and the Canadian Football League (CFL) are thrilled to announce that the 109th Grey Cup game is sold out!

More than 33,000 fans will be on hand when the championship game is held at Mosaic Stadium for the first time on November 20th. Kickoff is at 5 p.m. CST.

“The Grey Cup is more than a game – it’s about unity, strength and community,” said CFL Commissioner Randy Ambrosie. “It’s a shared legacy between our great game, our world-class players and our incredible fans, and we couldn’t be more excited to gather in a packed-to-the-brim Mosaic Stadium, to write the 109th chapter of this story together.”

“We have been absolutely floored by the support that we have received for the 109th Grey Cup in Saskatchewan,” said Roughriders President and CEO and Grey Cup Festival Co-Chair Craig Reynolds. “We are looking forward to hosting fans from across the country at Mosaic Stadium for the championship game, and thousands more for a once-in-a-life time celebration of Canadian football at our Grey Cup Festival.”

Fans are also invited to the Grey Cup Festival, November 15-20, featuring family-friendly events, team parties, like Riderville, and an exciting daily entertainment lineup. The Festival kicks off in Saskatoon on November 15 before moving to Regina, where all Festival events and the 109th Grey Cup are on the same footprint!

Some fan favourite Grey Cup Festival events are already on sale including the Dye & Durham Indoor Tailgate – featuring the Hunter Brothers and Team Party Passes with more Festival events set to go on sale in October.