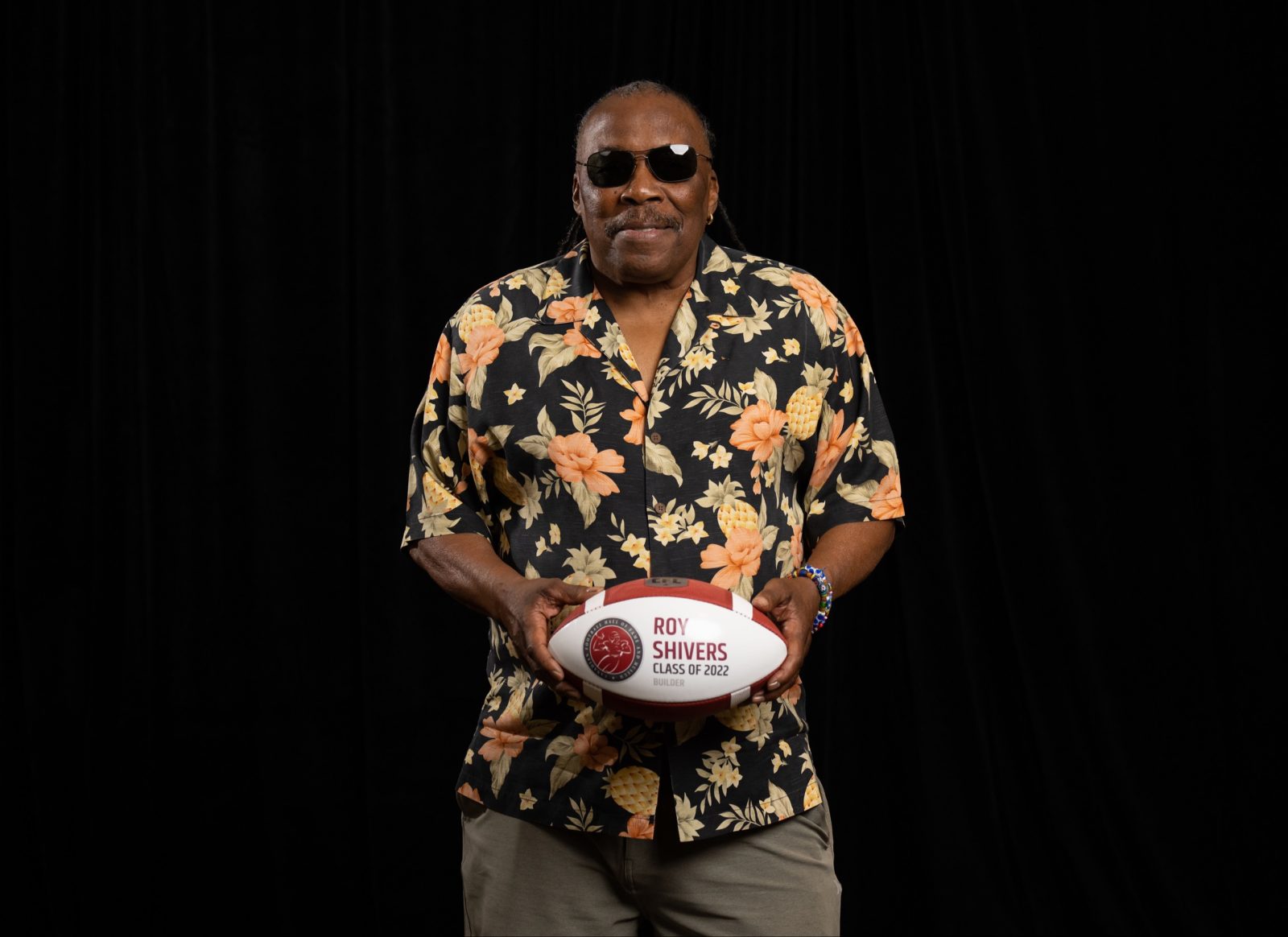 Roy Shivers never intended to be a pioneer in professional football.

Growing up in Oakland, California, one of seven kids in his family, Shivers was inspired by the work and mentorship happening at his local recreation centre.

It was a calling he chose to see through to college, majoring in recreation, and eventually coaching as he had hoped. At the same time, Shivers honed his strengths on the personnel side, eventually leading him to a successful 32-year career in the CFL starting with the BC Lions in 1983.

His contributions have earned him an induction into the Canadian Football Hall of Fame as part of the 2022 builders’ class. Shivers made his mark as an assistant coach, a scout, a director of player personnel and professional football’s first Black general manager.

“I think about it when I’m talking to young players and stuff and they want to go into coaching or administrators,” Shivers said Thursday. “I tell them, you got a chance now. If you get your foot in the door, bring somebody with you.”

It’s advice Shivers received as a 12-year-old from his father, Willie.

“Charles Barkley said your idol should be sitting across the table from you at breakfast. My father sat at the breakfast table every morning,” he said. “He was always in my ear. I didn’t appreciate it then, but I appreciate it now.”

Shivers totalled eight seasons as a GM, first with the US-based CFL Birmingham Barracudas in 1995 and then with the Saskatchewan Roughriders from 2000-06.

During his time in Green and White, Shivers also hired the club’s first Black head coach, former CFL quarterback Danny Barrett. The Riders had a 52-64-1 record with Shivers as GM and made the playoffs four times.

“I met a lot of wonderful people in Saskatchewan and Regina and I have a lot of friends there that I stay in touch with,” Shivers said.

While he never captured a Grey Cup with the Roughriders, Shivers helped BC get there twice, in 1985 and 2011, along with two titles as part of the Calgary Stampeders organization in 1992 and 1998. 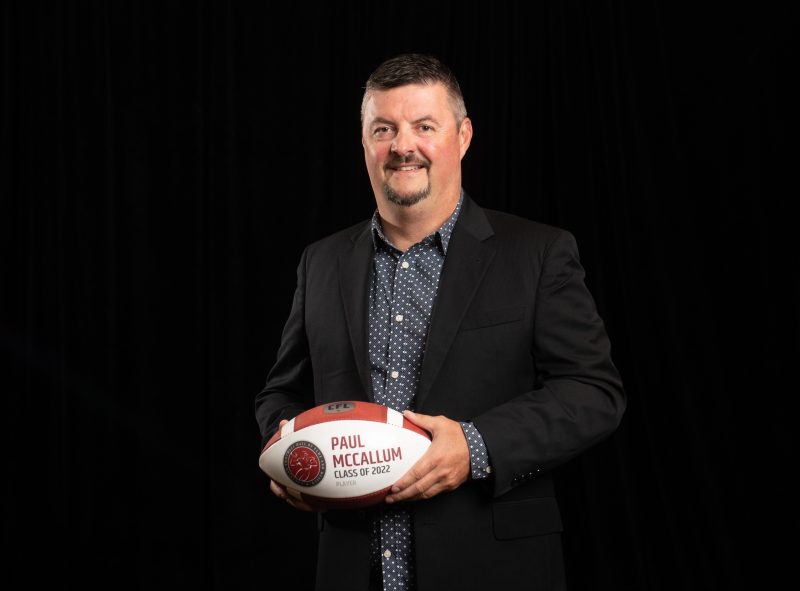 Paul McCallum has one word to sum up kicking at old Taylor Field.

“Hell,” he said, laughing. “I’d wake up and look outside the window … and it was just disheartening seeing that you’ve got an 80-kilometre wind.”

McCallum is widely regarded as one of the best kickers and punters in the history of the CFL. The former Surrey Ram played in 340 games across 24 seasons with the BC Lions, Ottawa Rough Riders and the Saskatchewan Roughriders.

For his numerous accomplishments, McCallum is being inducted into the Canadian Football Hall of Fame as part of the 2022 player class.

The 52-year-old said he learned about the honour in a phone call from former Riders reporter, Darrell Davis, while sitting at a BC Starbucks.

“It was kind of shocking,” he said. “Then I realized that it was my mom’s birthday, so it was kind of extra special because she had passed away seven years before.”

McCallum sits second on the list of all-time scorers with 3,145 points, and he is one of only two players to eclipse the 3,000-point milestone.

“It seems like yesterday when I was actually trying to make football a career and everything,” McCallum said Thursday. “I don’t think I was able to really appreciate the life that I had playing football until it was almost over.”

McCallum’s 1995-2004 run in Green and White had its ups and downs. The kicker reflected fondly on the fans who reached out with personal stories and even one couple who invited him to a wedding before a Labour Day Classic.

But the father of two also dealt with harassment and property damage after missing an 18-yard field goal in overtime at the 2004 West Final, that would have sent the Riders to the Grey Cup.

“There’s still some fans who don’t like me and, you know, they’re allowed to do that. It’s just all part of the whole thing of being a sports fan,” he said.

“I’ve said it all along, the people of Saskatchewan, I have nothing but good things to say about them … You can’t appreciate and understand unless you live there.”

There was, of course, one monumental moment for McCallum as a Rider: setting the record for the longest made field goal in the CFL at 62 yards, which still stands.

“We went for a Hail Mary, but I had said to (head coach) Danny Barrett, I wanted to kick the field goal,” McCallum recalled, adding Barrett dismissed the idea at first.

“It just sort of happened really quickly. And it was really cool, and it was exciting. Jeremy O’Day, the GM now, he was my snapper at the time. And, you know, it’s something that we get to share together.”

Regina was also where both of McCallum’s daughters were born. This weekend, Megan and Paige will join their father for his Hall of Fame induction.

“Lots of milestones for them growing up and lots of memories,” he said, remembering bike rides with the girls through Wascana Park.

“When my phone rings, one picture I have of my eldest is the first time I ever held her on Taylor Field when I was wearing the black uniform. So that’s a thing that pops up.”

McCallum and Shivers are both part of the Canadian Football Hall of Fame Class of 2022 which will be officially inducted Friday, Sept. 16, at Tim Hortons Field.

The Media wing of the CFHOF will also welcome two new members – Glen Suitor and Ed Willes – in recognition of their distinguished service in providing coverage of Canadian football. They will be honoured at the Football Reporters of Canada’s annual brunch during Grey Cup Week in Regina.