Getting Shaq Back : Evans Talks Recovery, Receivers, and Resilience 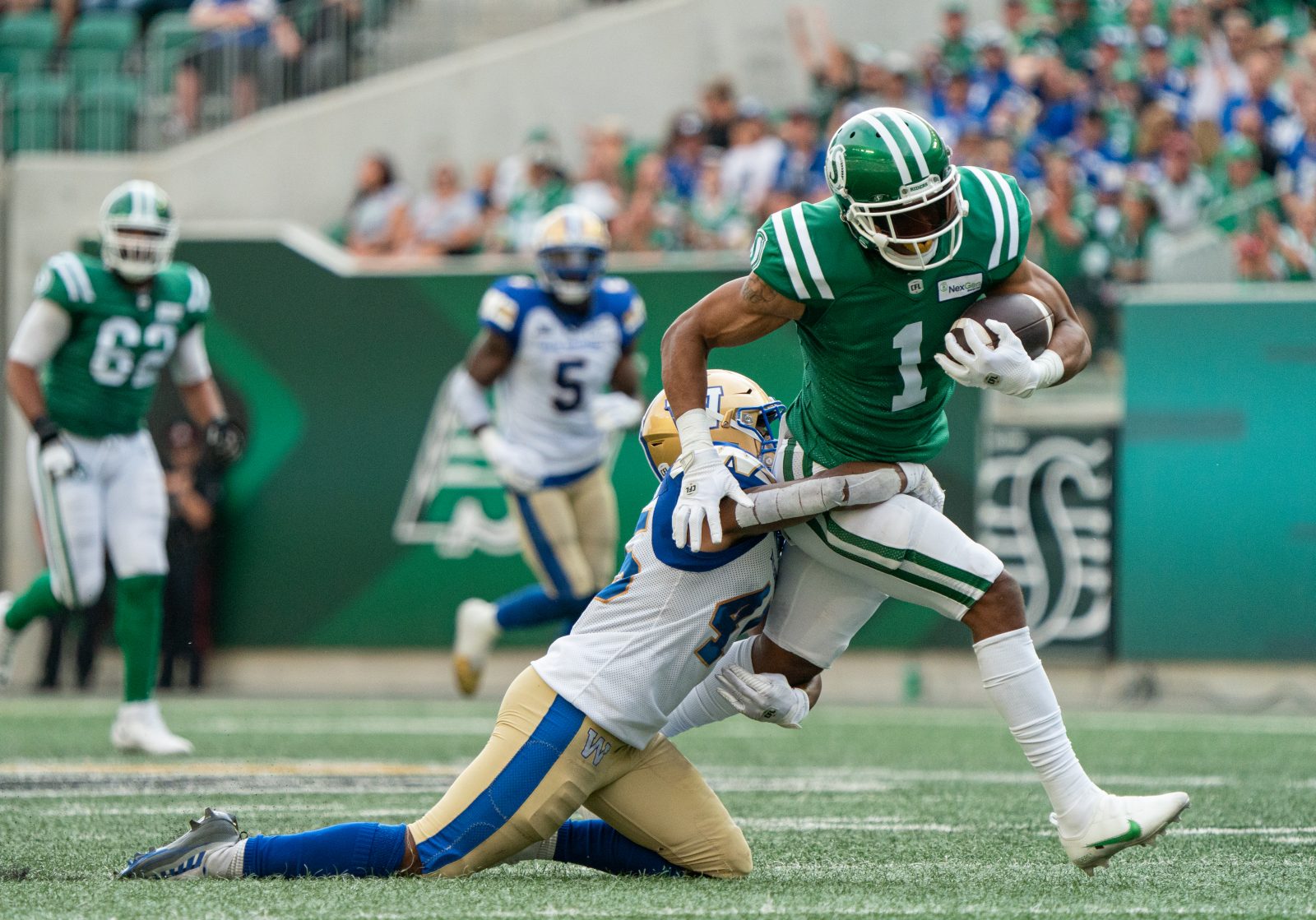 Getting Shaq Back : Evans Talks Recovery, Receivers, and Resilience

Shaq Evans is not the same man who signed with the Saskatchewan Roughriders in 2018.

The now 31-year-old wide receiver has experienced highs in his professional football career, followed by lows: a cancelled CFL season due to a global pandemic, and two seasons disrupted by injury.

“I’m definitely mentally stronger. I’ve been going to therapy for the last two years and I feel like everybody could use a little bit of it … every now and then, just to talk to somebody,” Evans said. “There were things going on in my life that just made me want to just be a more positive person … I felt like I let little things get to me too much, let it affect my day or week.”

Evans started opening up to his therapist, who is also a sports psychologist, in late 2020. He said the conversations helped him navigate back-to-back seasons of injuries; his most recent being a fractured right fibula in the first quarter of a Week 3 road game in Montreal on June 23.

He had one catch in that Thursday night tilt, which was a short turnaround for a Saskatchewan team that played late the Saturday prior in Edmonton. The Alouettes defeated the Riders 37-13.

“I feel like I attacked it with a positive mindset,” Evans said about his physical recovery. “Some days are harder than others … it’s a mental, you know, struggle because like I say, some days you feel like you can go, some days you can’t.”

A few weeks in, Evans — like many of his teammates — contracted COVID-19 just before the first bye week of 2022. He hadn’t planned to go home, given his recovery, and said the recent bout of the virus was much milder than his first back in December 2020.

Through nine weeks of physical rehabilitation, Evans was finally ready to return, on his terms, for the Labour Day Classic. 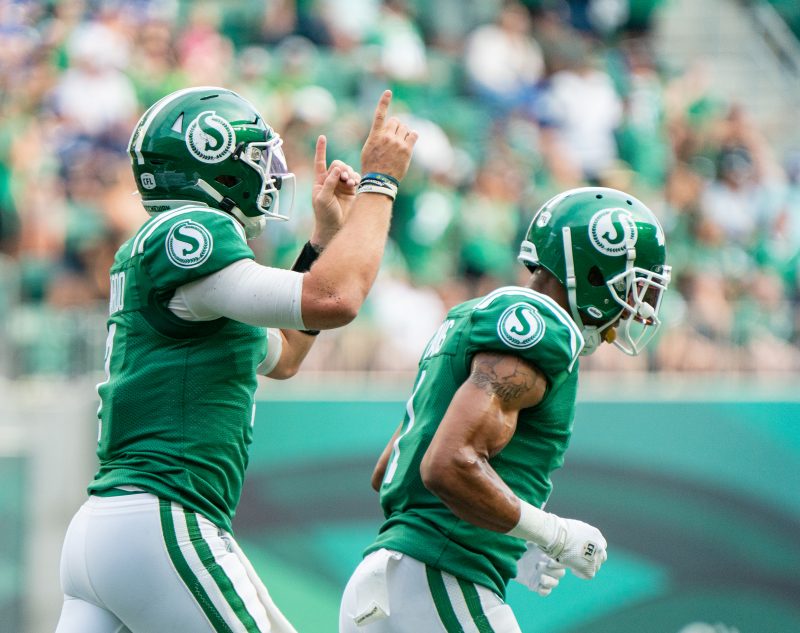 Evans missed Labour Day 2021 due to a broken left foot. That injury happened in Week 2 of the season, and he was out of the lineup until Week 12.

His 2021 return was also more subdued. Through seven games total, Evans only went over the 50-yard mark once. In the West Semi-Final and West Final combined, he had one reception for negative-four yards.

“Going through the last year, it helped me make that decision this year in terms of waiting one more week and I feel like it paid dividends,” he said.

The receiver also had an experienced centre in his corner. Dan Clark, who suffered a broken fibula and a shift of a bone in his right ankle less than a week before Evans’ injury, helped the wide receiver keep perspective.

“He’s an amazing dude and one of the best people I’ve met.”

Evans also received an outpouring of support from Rider Nation. He said fans reached out after the initial news and continued in the weeks since.

“Each week I would get a message from someone saying, ‘Keep your head up’ or ‘We can’t wait to have you back’,” he said.

“I want to thank Rider Nation; I love you guys. I’ve been here four years, so it’s hard not to love them. This is the first place I could call home as a professional, so I thank them from the bottom of my heart for reaching out to me all the times they did.” 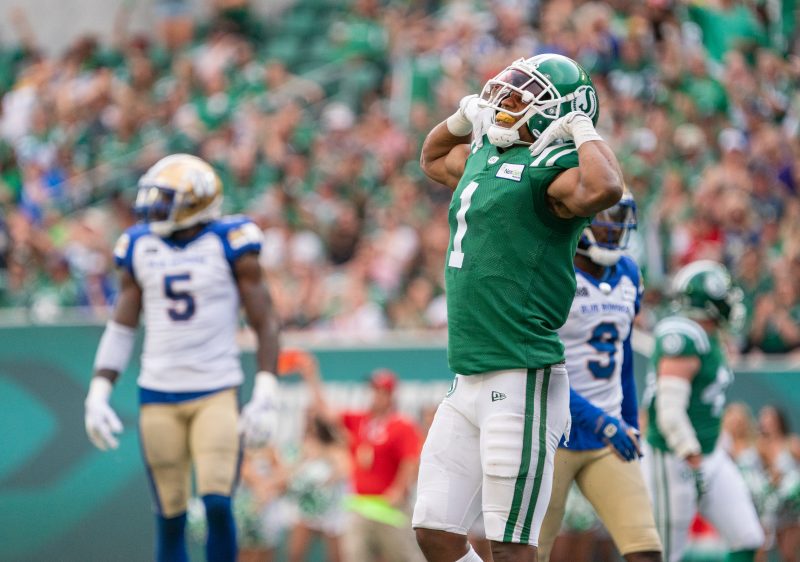 Evans had 10 receptions for 185 yards to start the 2022 season prior to his injury. His performance at Mosaic Stadium on Sunday added five more receptions for 88 yards, averaging 17.6 yards a catch, with the longest being 30 yards.

The Riders had a 3-4 record when Evans was out of the lineup in 2021. The team went 4-4 during the eight games he missed this season.

During his recent recovery period, Evans was present on the home-game sidelines — showing up an hour before kickoff and cheering on his teammates’ successes.

“The game when Nick Marshall scored the pick-6, I hopped all the way down to the end zone on my one foot and took a video on my phone,” he said. “I love my team and I love my teammates, even though I wasn’t playing.”

Evans added that while it hurt not being on the field with the team, he appreciated seeing the development of receivers like Kian Schaffer-Baker, Samuel Emilus and Mitch Picton.

“Just seeing dudes stepping up and then having Swerve (Kyran Moore) coming back. It’s definitely something I love to see,” he said.

Evans and the strong Riders receiving corps will be back in action this Saturday for the Labour Day rematch against the Winnipeg Blue Bombers at IG Field. Kickoff is 3 p.m. CST.

Rider Nation has two more guaranteed home games in 2022, when the Edmonton Elks visit on Friday, Sept. 16, and when the Calgary Stampeders ride into town on Saturday, Oct. 22.