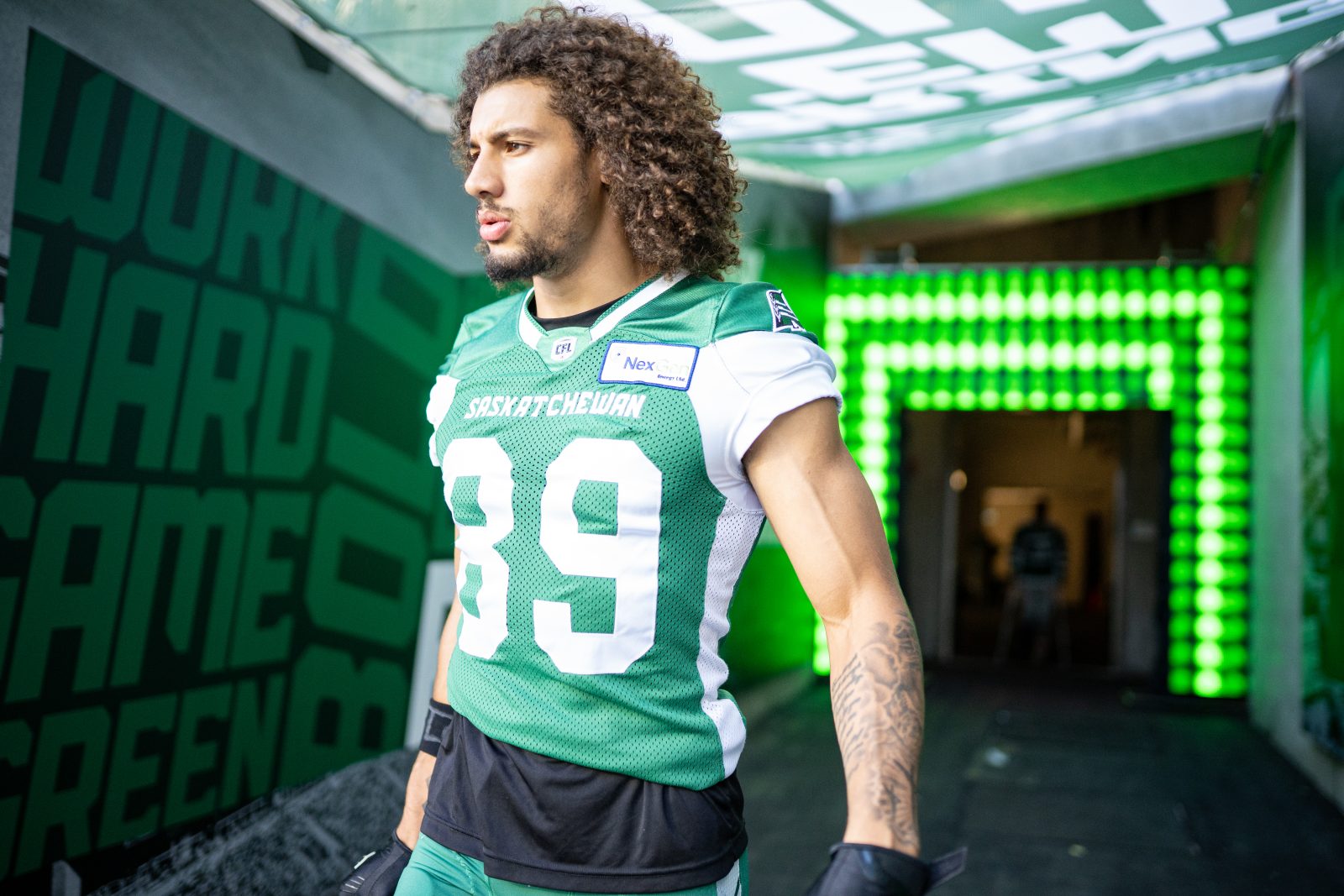 Kian Schaffer-Baker is a standout on the football field and usually the last in after a game.

The 24-year-old from Mississauga, Ont. is quick to make time for young fans at Mosaic Stadium, signing jerseys and passing off game gloves, no matter the weather. He even pulled over at a Regina park once to throw some footballs with kids practicing their skills.

“I take 30 minutes just to say hello and meet some new people, and hopefully that has an impact on them,” he said.

“As much as it’s making their day, it’s making my day all the more just meeting all these people and seeing their smiles and all the questions they have to ask.” 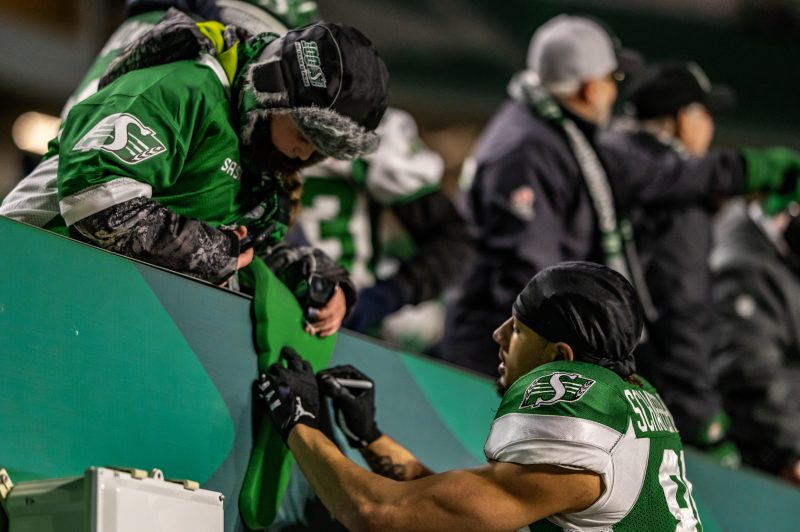 (Picture ID: Kian Schaffer-Baker signs a green foam finger for a young fan bundled up in the cold after a game in late November, 2021)

It didn’t take long for Rider Nation to get on board with the dynamic receiver, whose name is appearing on more fan jerseys and serves up a delicious, well-known, nickname.

“My first football coach, he called me ‘Shake ’n Bake.’ So the fact that it’s just carried on as far as just crazy. I love it,” he said.

Friendly nature aside, Schaffer-Baker is aggressive with his drive to be the best. His high-flying athletic catches, and consistent yards gained afterwards, are earning him praise around the league. 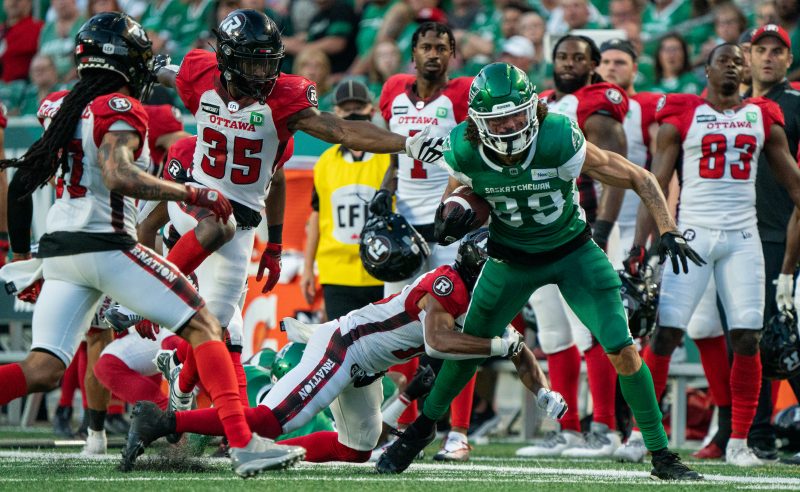 Still, it’s surreal for the kid from Mississauga to see his name emblazoned on a CFL jersey.

Mom Lisa Schaffer said Kian first wanted to play football when he was four years old, watching his older brother at the time, but had to wait until he was nine to join a junior club.

“We had a calendar that every year we’d go, ‘Okay, one year closer to you playing football,’” she said. “He always said, ‘I want to be a professional football player.’ Even in Kindergarten.

When the time eventually came, Lisa recalled signing a waiver because Kian was so undersized. He remained the smallest player as he levelled up to varsity, often sitting as other older, larger players got reps.

“But he sat on the bench and he looked, he knew what everybody was doing. He just bided his time until it was his to shine,” she said. “The thing that really amazes me is that it’s all his work, his dedication. He always wanted to go to practice.” 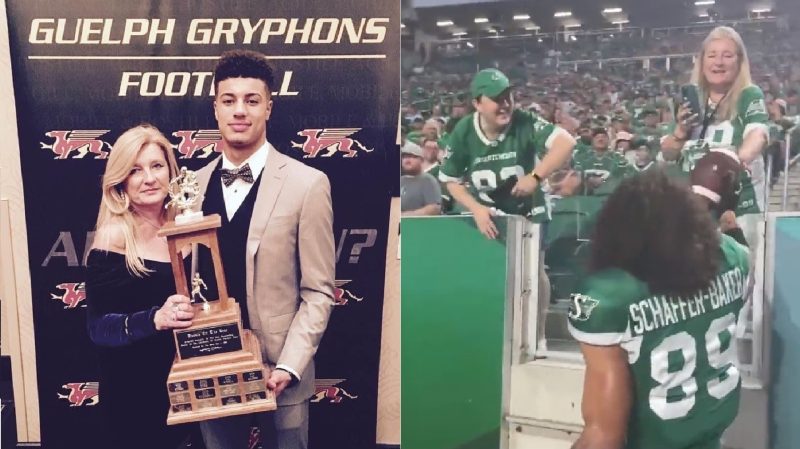 (Picture ID: (Left) Lisa Schaffer (Kian’s Mother) poses with her son Kian Schaffer-Baker after receiving the 2016 Rookie of the Year for the Guelph Gryphons. Both are holding the large trophy in formal attire. (Right) A bucket list item crossed off for Schaffer-Baker as he delivers a CFL game ball to mom Lisa following a touchdown at Mosaic Stadium on July 8, 2022.)

Schaffer-Baker lights up when talking about his mother, who cared for three children on her own at the time, and her resolve to help them succeed.

“I could probably count on my hand the amount of games she missed growing up,” he said. “She just always found a way to just put our priorities first. Her hard work and determination every day has been passed on to me, and it inspires me.”

Schaffer-Baker’s persistence didn’t go unnoticed by coaches and others with a means to help him along the way. When Lisa worked weekends, his high school football coach, Patrick McCallion, took him on university tours. He connected with people like former CFL defensive back Shea Pierre, who showed him how professional athletes train and helped fuel his dream.

Schaffer-Baker eventually played USports football with the University of Guelph Gryphons from 2016-2019. He finished with 95 receptions for 1,544 yards and eight touchdowns through 28 games. 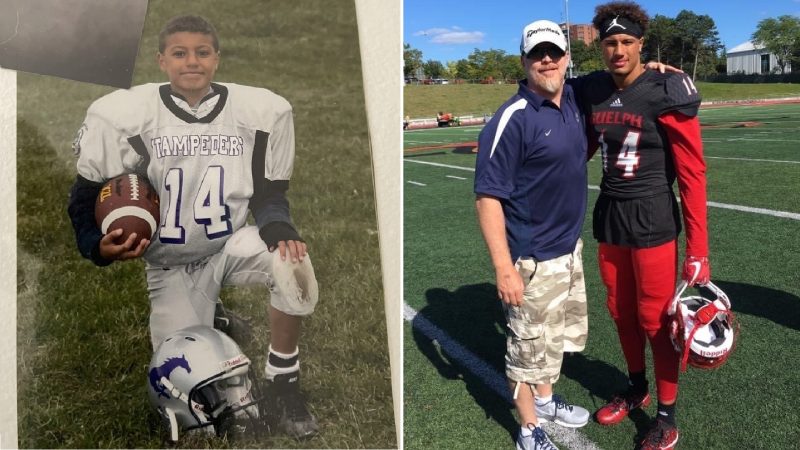 (Picture ID:(Right) A Young Kian Schaffer-Baker in 2007, finally playing with the Streetsville Meadowvale Football Club in Missisauga, Ont., posed on one knee in a silver and purple football uniform.  (Left) Schaffer-Baker, playing for the University of Guelph, poses with his high school football coach Patrick McCallion, who took him on many university tours while his mom Lisa worked.)

While he was not invited to the 2020 CFL Combine, Schaffer-Baker was drafted in the fourth round, 30th overall, by the Saskatchewan Roughriders.

The cancelled pandemic season deferred his rookie season to 2021, where he recorded 47 receptions for 563 yards and two touchdowns through 12 regular-season games.

“It’s a new home, it’s a different home. But it’s one I’ve embraced and I’ve come to love and it shares a special place in my heart with all these new people and memories I’ve made here,” he said.

Now in his second year, Schaffer-Baker believes the 2022 Riders receiving corps is particularly close, going out for weekly dinners and finding ways to connect with each other as friends.

“We have such a good group of guys from top to bottom. Whether that starts with our receiver coach and then down to the new guys that have come and joined the team. We’re so tight,” he said.

“We’re always picking each other up and helping each other become the best version of ourselves. That’s what we have to do in order to win championships.” 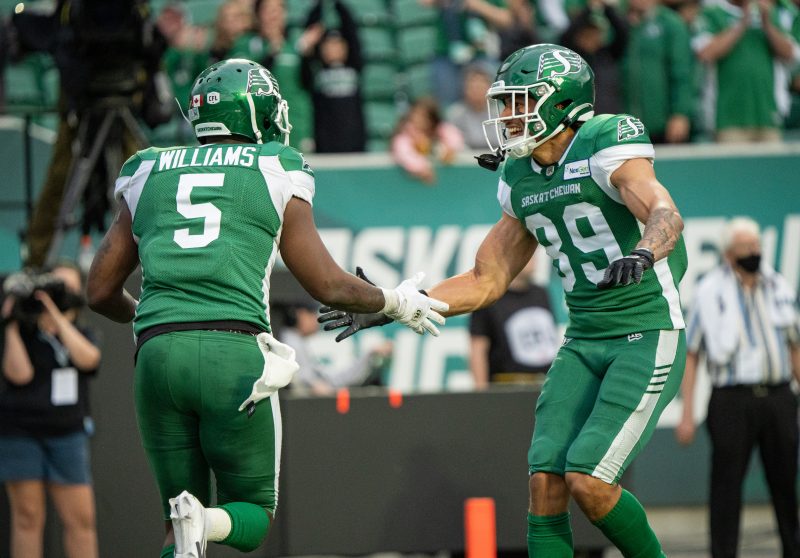 Faith is another glue that binds tight the bonds of the 2022 Saskatchewan Roughriders team.

Schaffer-Baker said there is a group who routinely conduct bible study and attend church services when time allows. Otherwise, they take part in online services. Every game day, the team’s chaplain Jared LaCoste leads a special prayer with a smaller group of players to give the team strength and guidance.

“Then when we pray as a team. We’ll just say ‘Our Father’ and recite that all together, before we go out to war with one another,” he said.

“That’s one thing I enjoy a lot. (Faith) definitely calms you down and that’s the only reason why I’m personally, and all of us, are out there playing football — because God has blessed us with the opportunity to go out there.” 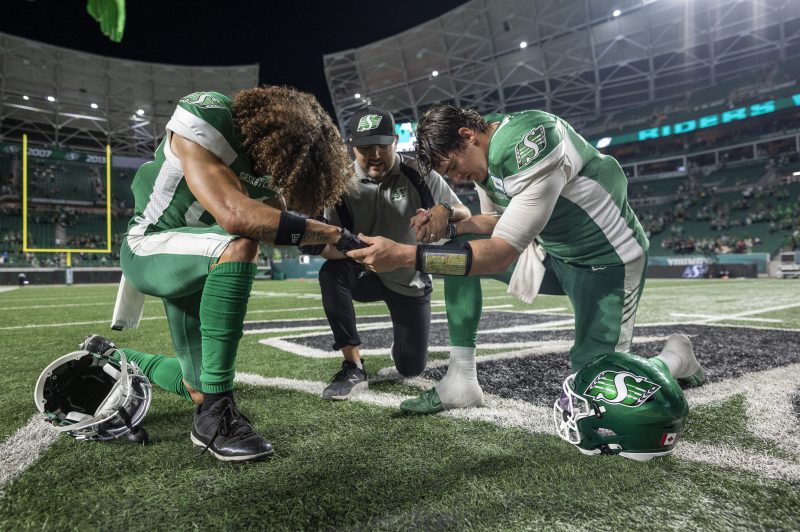 For his first home in the CFL, Schaffer-Baker said he is pleased with the “phenomenal” work of head coach Craig Dickenson.

While he has scored many touchdowns in many venues, Schaffer-Baker said there is something electric about the thunderous sound of Mosaic Stadium.

“There’s no better feeling. The whole rumble and shake of the entire stadium and then giving them a little dance or something just to get them going even crazier,” he said, adding that he is always thankful to the fans who show up whether it’s a game or practice.

“We’re just so appreciative of that. And that’s another reason why we go so hard and we hope to be hoisting that Grey Cup on November 20 in front of all of our amazing fans.”