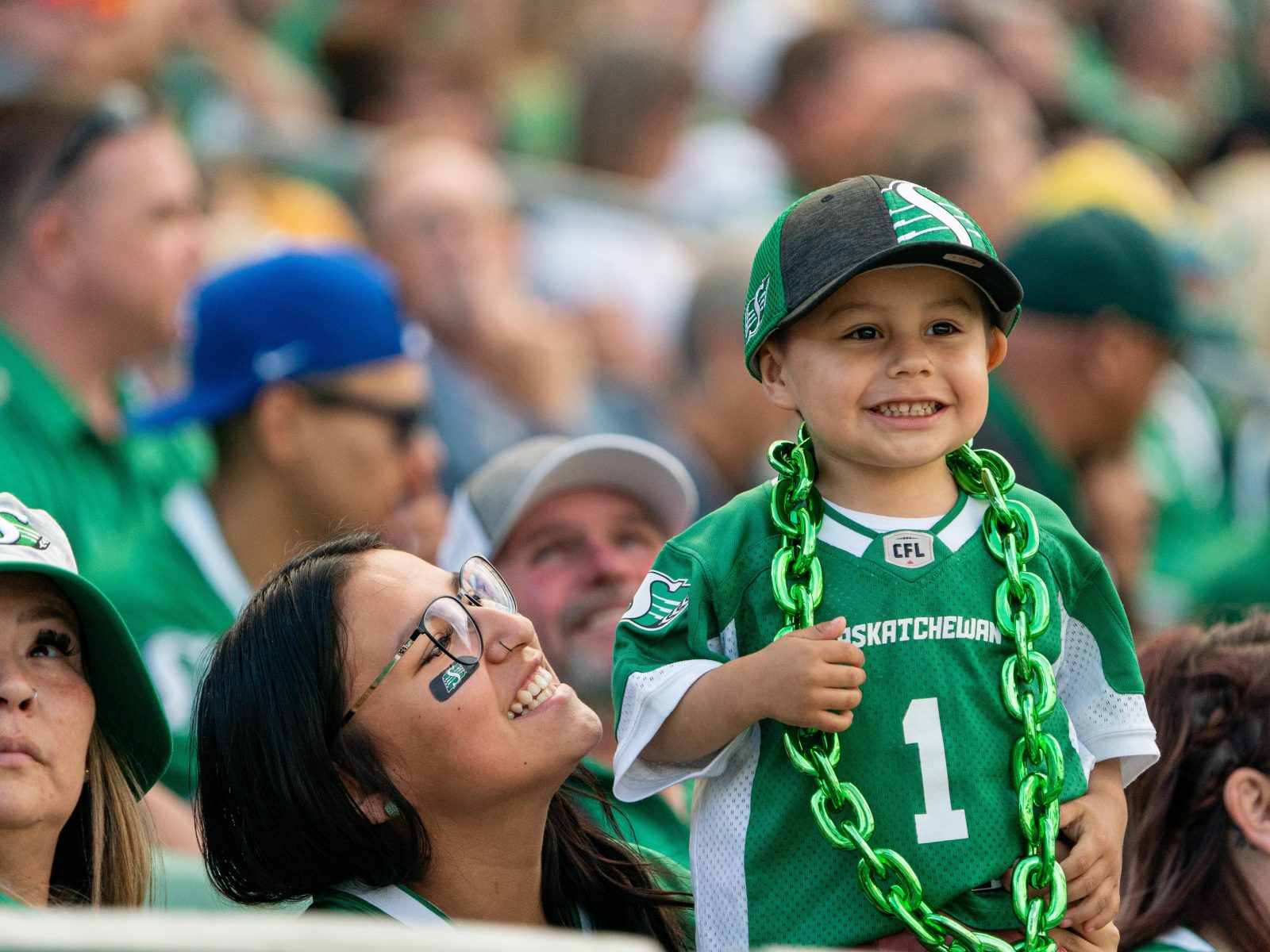 Kaitlin Thomson’s destiny as a Saskatchewan Roughrider fan was set in motion decades before she was born.

In the late 1940s, her grandparents went on dates to watch the Riders at the newly-named Taylor Field. By 1952, Garth and Virginia Kennedy were married with a young family and season tickets to watch their team.

Today, those seats are occupied by their great-grandchildren.

“It’s part of who I am as a person, going to Rider games with my grandparents, my parents and now bringing my kids. I feel very lucky to have that,” said Thomson, who carries on the family tradition.

Thomson travels 240 kilometres from Swift Current to Regina with her parents, husband and two children for Rider home games.

While she doesn’t have parking spot No. 1 as her late grandfather once had at old Taylor Field, he is never far from her thoughts at Mosaic Stadium.

“He was just beaming with Rider pride all the time,” she said. “He was always sad they didn’t play ‘Green is the Colour.’ They started bringing that back maybe five years after he passed and that always makes me so happy; he would be so happy.” 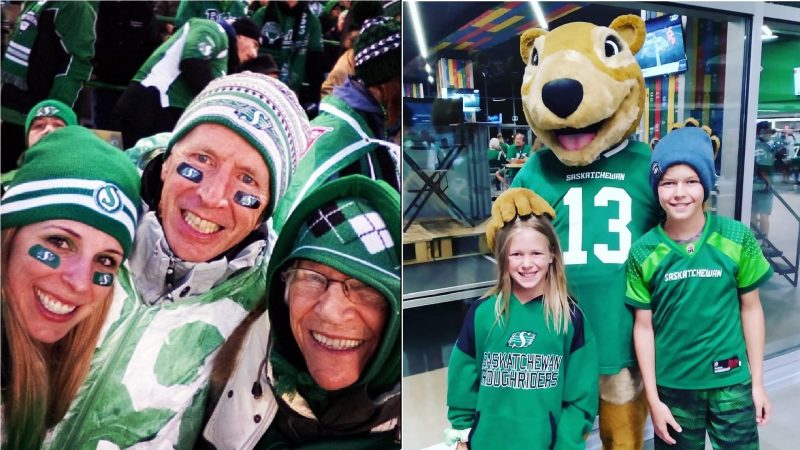 (Left) Kaitlin Thomson with her father Kim Kennedy and grandmother Viriginia Kennedy at the 2013 Grey Cup in Regina, Sask. (Right) Thomson’s kids are all smiles with Gainer the Gopher.

Gavin Stewart was five when he went to his first Rider game in the late 1980s. His grandpa and dad had season tickets, with one extra shared in turn by Stewart, his brother and their cousins.

“In high school I got my own season ticket for a few years, sitting with them,” he said. “I had them from Grade 10 to first year university. At that time, I had two jobs and a paper route.”

Stewart gave up his season ticket for a few years to finish school. Luckily, the same seat beside his family was available when he returned in 2008.

Stewart, his younger brother Rory, dad and grandfather have been coming to Rider games together ever since.

“This is the first year my grandpa was unable to attend, he’s 92 now. As a result, my two boys are now taking turns in his seat,” he said.

“For us it’s a generational love for football, the Riders and really the CFL as a whole. It’s a privilege to go to the games and enjoy them and the atmosphere with family.” 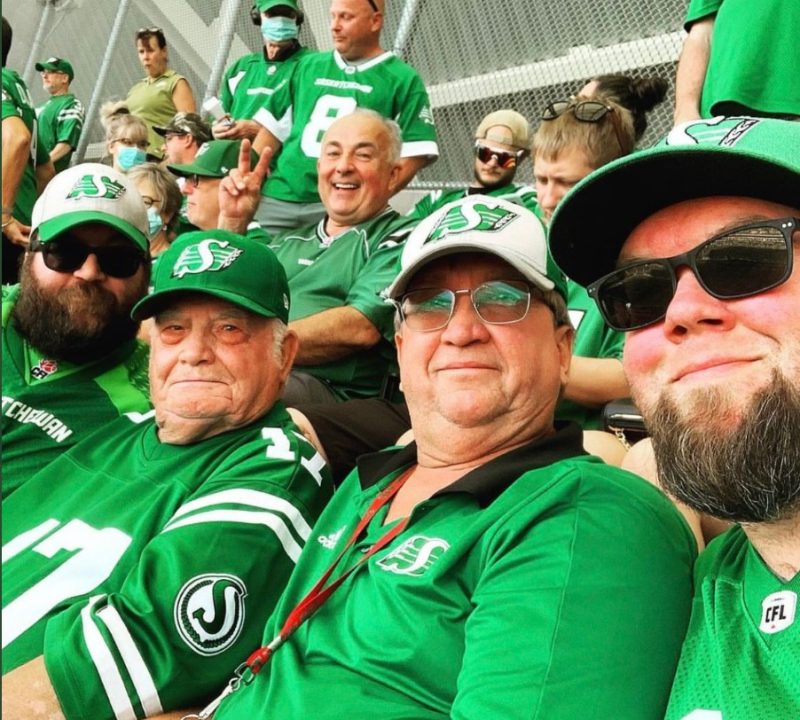 Not everyone is born a Rider fan, however.

If it wasn’t for a fateful visit from then-Rider slotback Bruce Boyko in 1992, Greg McCulloch may have joined his father as a Winnipeg Blue Bombers fan.

“Bruce came and did a talk at our school in Moosomin. Can’t remember if it was ‘say no to drugs’ or anti-bullying, but at the end of it I got a signed card, which I still have,” McCulloch said.

“Then my Bomber-loving dad won Rider tickets through work. It was Riders versus Ti-Cats. I don’t remember who won, but I remember Narco getting a touchdown. After that I was hooked.” 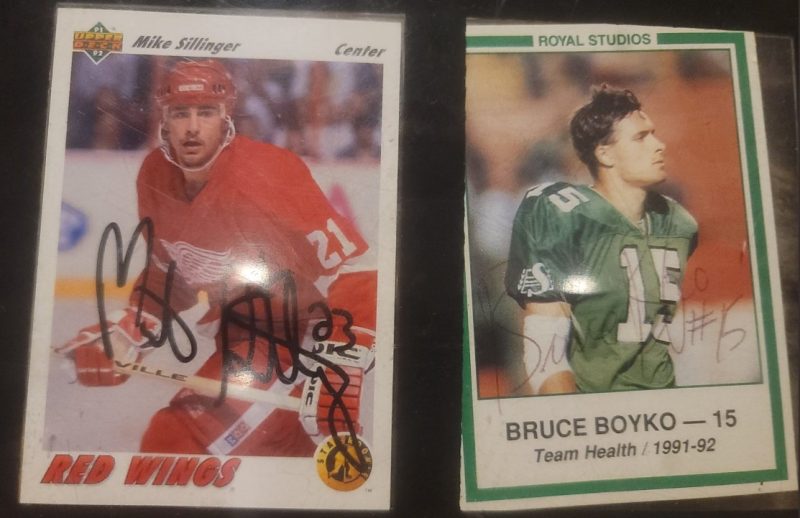 Greg McCulloch’s most important possessions in ’92: his signed Bruce Boyko card and signed Mike Sillinger Rookie card. Decades later, McCulloch has season tickets and his kids are coming to more games with their Rider-loving dad.

Janet Mazuch Carter married a Manitoban man with little interest in the CFL. She tried to get him to watch games but, in his words, he “didn’t really follow ping pong.”

“I got him to watch the ‘07 Grey Cup with our one-month-old daughter. Fast forward to 2012, I finally convinced him to go to a home game. We took our daughter, too,” she said.

“We were season ticket holders in 2013 and have rarely missed a game since. My husband went from not knowing a thing about football to downloading the CFL rule book.” 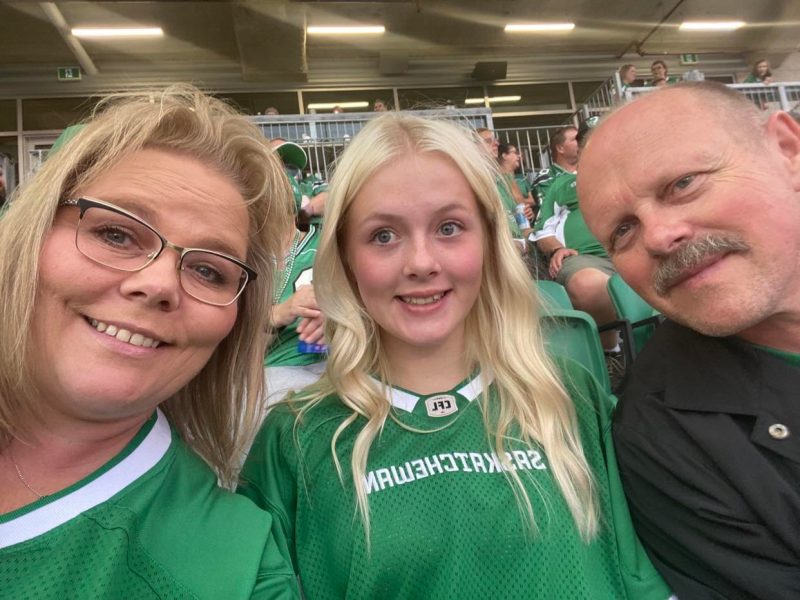 As for the kids, they’re more than alright.

“I always look forward to just cheering my guts out because it’s so exciting to cheer for the Riders and just yell, ‘Defence!’ Or, ‘Come on Cody, you got this!'” Tyra said.

For 14-year-old Kairo, the best part of game day is getting solid time with dad, while 15-year-old Zion is more hyped for the buildup to the gridiron battle.

“I always get chills when I hear ‘Bring ’em Out’, and every time we go to a game that’s the first thing I look forward to,” Zion said. 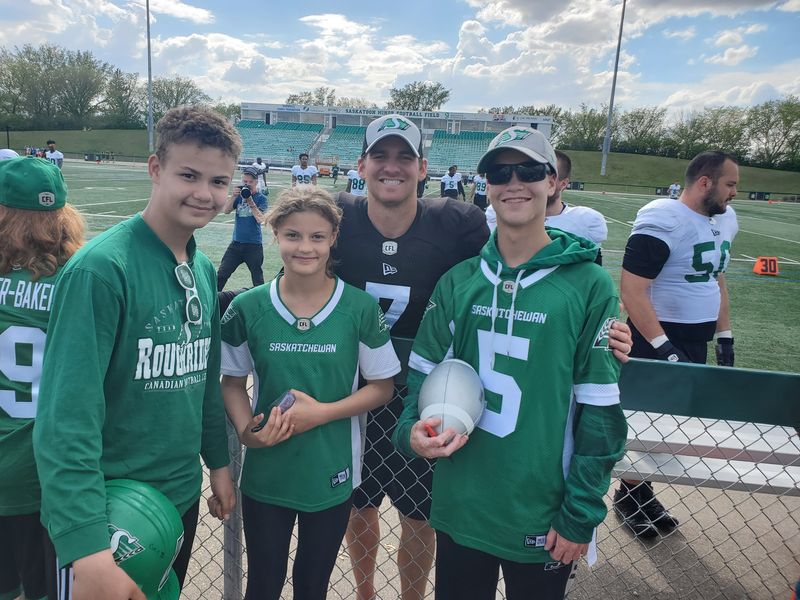 Sunday is Ruffles Family Day with the Riders, as the team (4-2) hosts the rematch against the Toronto Argonauts (2-2) at Mosaic Stadium. Kickoff is at 5 p.m. with the Coors Light Party in the Park starting at 2 p.m.

Get to your seats early, the first 5,000 kids through the gate will get a special gift: Rider Slime!

The Riders will also have a special Junior Anthem Singer, Junior PA Announcer and Junior In-game Host along with our 620 CKRM Rider Cheer Team, Gainer, games, contests and much more. The Extreme Dog Show will provide halftime entertainment.

After the game, everyone is invited to the field to run, play and take some great family photos.