ROUGHRIDER FOOTBALL IS BACK 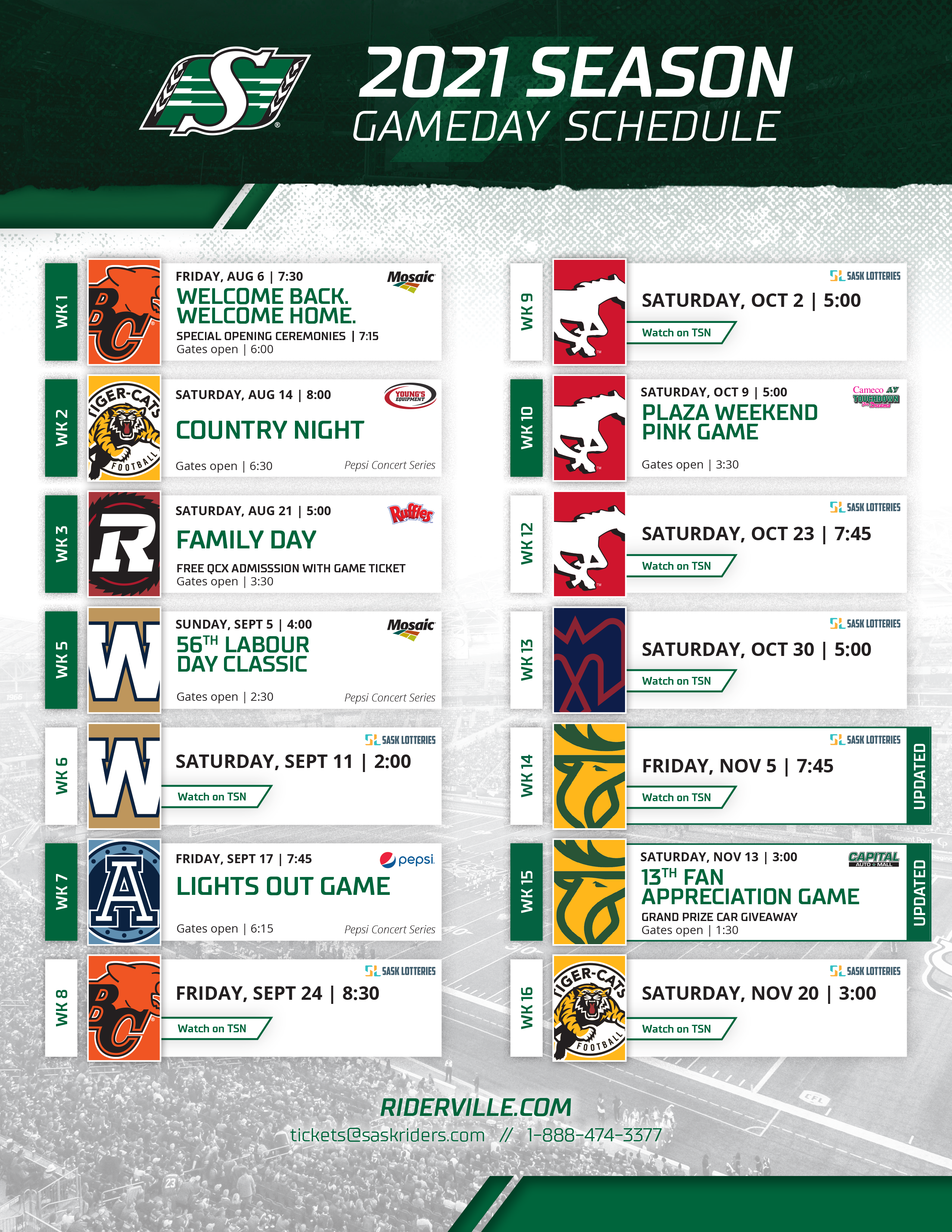 After confirming that the 2021 Season will go ahead as scheduled in August, the CFL has released its 14-game schedule that will culminate with the 108th Grey Cup at Tim Horton’s Field in Hamilton on December 12th.

The Saskatchewan Roughriders kick off their regular season at home against the B.C. Lions, which will be the start of three consecutive home games for the Green and White. To accommodate the varied pandemic recovery across the country, the schedule frontloads home games for the prairie-based teams that have seen their provinces open more rapidly than the teams located elsewhere in Canada.

“This year’s schedule is a bit unconventional, but we think it’s a win for Roughrider fans,” said Saskatchewan Roughriders Chief Brand Officer Anthony Partipilo. “We all know there is nothing better than cheering on our Green and White on a Saskatchewan summer day and this schedule gives us a large portion of our home games when the weather is warmest, as well as lots of matchups with divisional rivals.”

While some things will be different this year, two important traditions remain intact: the Winnipeg Blue Bombers will come to town for the annual Labour Day Classic on Sunday, September 5th at 4 p.m. and the following week, the Riders will go on the road to Winnipeg for the Labour Day Rematch.

The Roughriders’ away schedule has them back at Mosaic Stadium just once between Weeks 10 and 16: November 5th at 7:45 p.m. against the Edmonton Elks. This will also be the last regular season home game of the year.

Having already reduced ticket prices in several sections in the stadium in 2020, the Club froze season ticket prices for 2021. It continues to offer its very popular multi-season ticket package, the MVP Plan, with exclusive benefits for joining this first time ever three-year program. MVP Plan holders receive an 18% discount off  regular game day prices, a free Rider jersey with an exclusive MVP patch ($170 value), a $75.00 per seat discount off full price 2022 Grey Cup tickets, and one free regular season game in 2023! Accounts with four or more seats will receive an additional free jersey and patch.

Season ticket holders looking to sign up for the MVP plan can contact the Rider Ticket Office at tickets@saskriders.com no later than June 30, 2021.

Any information about a potential sale of single-game tickets would be announced at a later date and will be based on public health guidelines at the time. Further details on the game day experience and any health and safety protocols will also be communicated in the coming weeks.