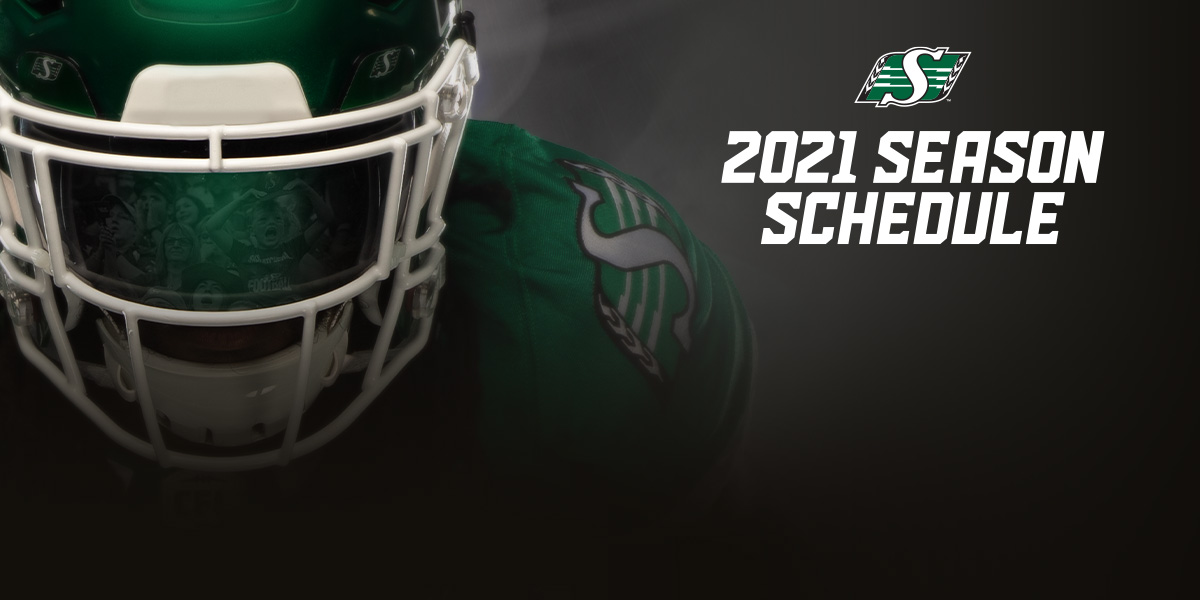 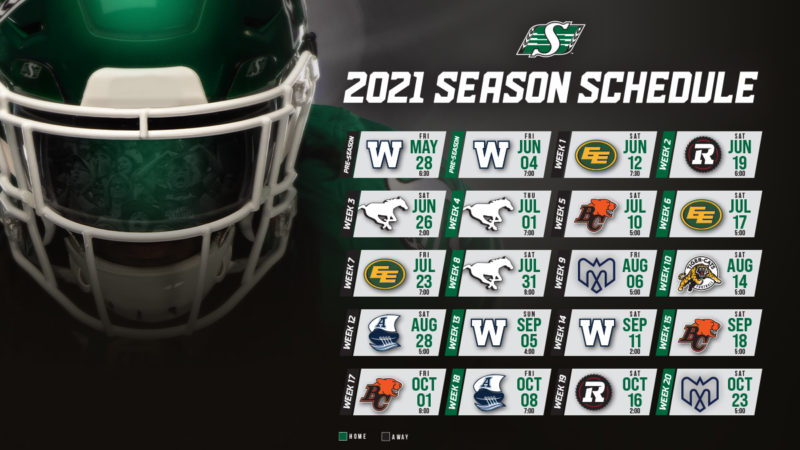 Click here for a printable PDF of the 2021 schedule

The Canadian Football League released its complete 2021 ‘comeback’ schedule this morning with a full 21-week season that will culminate with the 108th Grey Cup at Tim Horton’s Field in Hamilton.

The Saskatchewan Roughriders kick off their regular season on the road in Edmonton on Saturday, June 12. A week later, the Club will return to Mosaic Stadium on Father’s Day weekend for its home-opener against the Ottawa REDBLACKS on Saturday, June 19.

“Over the last several months we have done a tremendous amount of work behind-the-scenes to get ready for the Green and White to be back on the field for the 2021 season,” said Craig Reynolds, President and CEO of the Saskatchewan Roughriders.

“This schedule reflects our ongoing plans to play football next year and how hopeful we are, with the help and guidance of our local health authorities, that our fans will be able to join us back home at Mosaic Stadium.”

A new feature of this year’s schedule is an additional divisional match-up to build regional rivalries while also reducing travel for players. This means that the Club will face the EE Football Team, the Calgary Stampeders and the B.C. Lions three times this season, and the Winnipeg Blue Bombers twice.

The home schedule includes one Thursday night game – on Canada Day, one Friday night game and four ‘family-friendly’ games that start at 5 p.m. on Saturday.

The Club will host the Winnipeg Blue Bombers in the annual Labour Day Classic on Sunday, September 5 with a 4 p.m. kickoff, before returning to Winnipeg the next week for the rematch at 2 p.m. on September 11.

The Roughriders’ away schedule has them playing on the road on Friday (three games), and Saturday (six games).

Season tickets are already on sale to the public and current season ticket holders have been able to renew their seats since October 28.

Having already reduced ticket prices in several sections in the stadium in 2020, the Club has now frozen season ticket prices for 2021 and extended its early bird pricing until February. Newly introduced Family Pricing will continue next season alongside some new and some familiar perks for our season ticket holders, including the ability to redeem unused tickets for the last game of the season, a coupon to treat a friend with a buy one, get one free ticket offer, and a three-month easy payment plan option.  We’ve also brought back our popular Christmas gift card draw, and season ticket holders can secure their seats now for the 2022 Grey Cup with a $50 per seat deposit.

The Club is also pleased to offer a new multi-season ticket package, the MVP Plan, with exclusive benefits for those who join this exciting three-year program. MVP Plan holders will receive an 18% discount off game day prices, a free Rider jersey with an exclusive MVP patch ($170 value with free shipping in Saskatchewan), a $75.00 per seat discount off full price 2022 Grey Cup tickets, and one free regular season game in 2023! Accounts with four or more seats will receive an additional free jersey.

Fans wishing to purchase season tickets for the 2021 season, and join our MVP Plan, can visit Riderville.com or contact the Rider Ticket Office at tickets@saskriders.com.