The Canadian Football League released its complete 2020 schedule this morning, which will start the journey to the 108thGrey Cup hosted at Mosaic Stadium on November 22, 2020.

The Saskatchewan Roughriders open their regular season at home against the Montreal Alouettes on Friday, June 19 at 7 p.m. after starting the season on a bye.

“The 2020 season is set to be a very memorable one for us here in Riderville,” said Roughriders President and CEO Craig Reynolds. “Not only will we be celebrating our Club’s 110th anniversary, but we’ll end the season by hosting the Grey Cup. We hope our fans are ready to join us for one of our most exciting years yet.”

The Roughriders’ regular-season home schedule has them playing at Mosaic Stadium on Thursday (one game), Friday (two games), Saturday (five games) and Sunday (one game). Every CFL team will visit Regina once, with the exception of the B.C. Lions who will visit twice.

The Club will host the Winnipeg Blue Bombers in the annual Labour Day Classic on Sunday, September 6 with a slight change: a 5 p.m. kickoff.

The Roughriders’ away schedule has them playing on the road on Thursday (two games), Friday (one game), Saturday (six games).

“We want to congratulate and acknowledge the CFL and the other eight teams for the cooperation and hard work it took to put this season’s schedule together,” Reynolds said. “We know our fans are excited to get planning for 2020 and we can’t wait to show them what we’ve been working on to make this season special.” 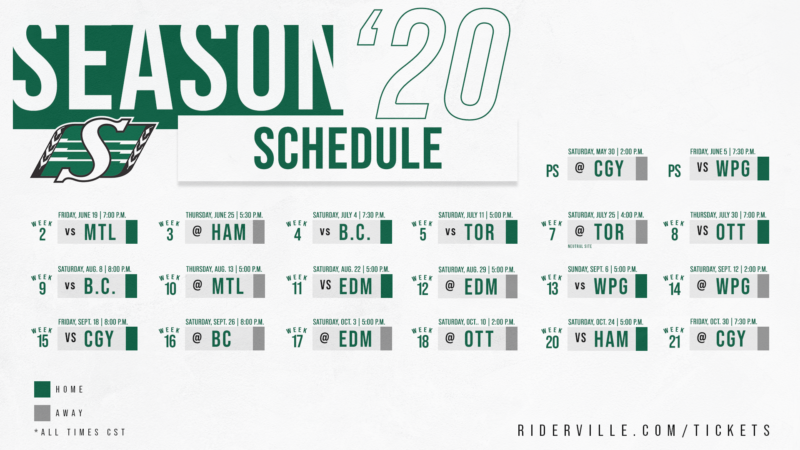