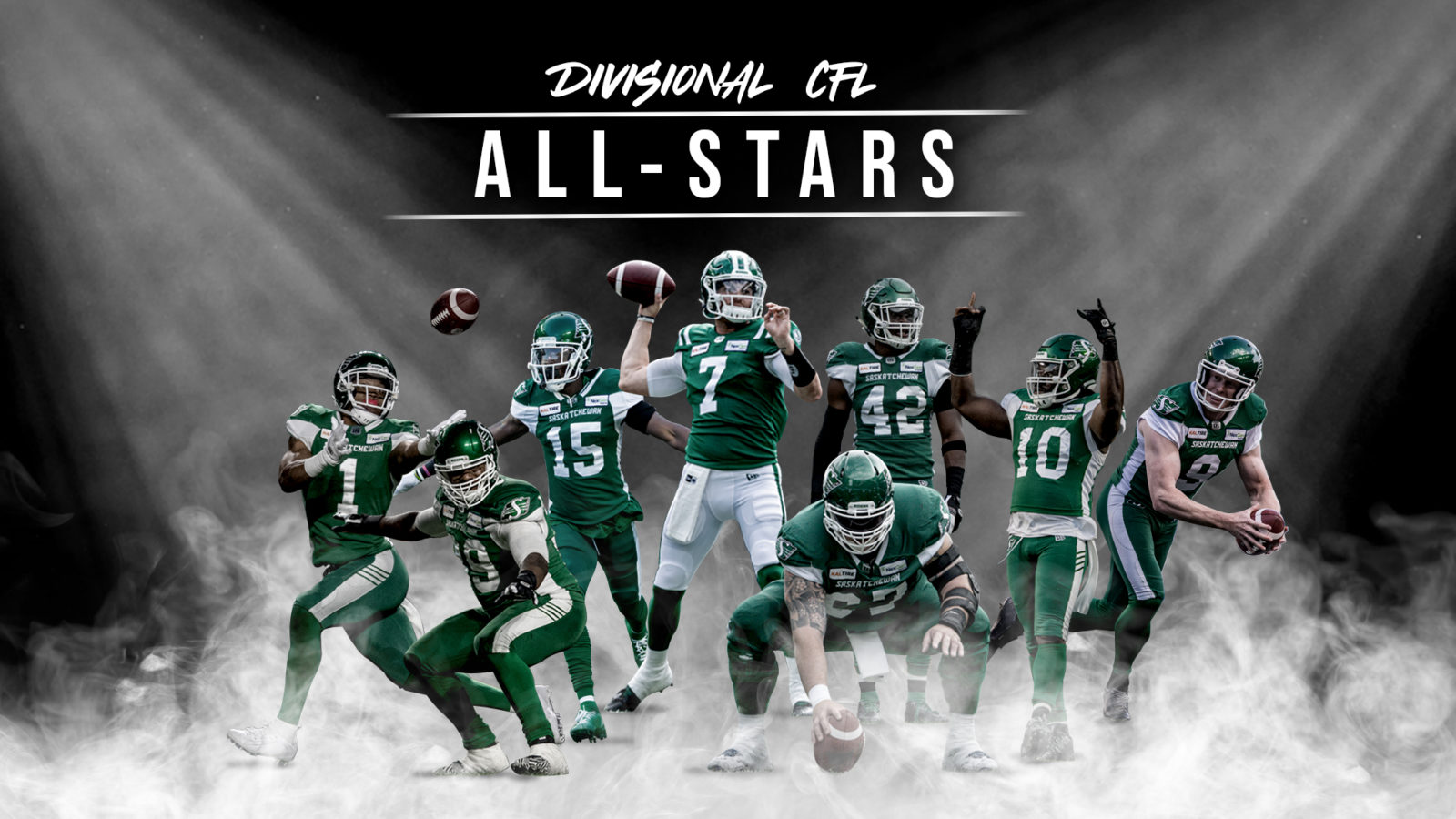 The Saskatchewan Roughriders are pleased to announce eight players have been selected for the CFL’s West Division all-star team, the most of any team in the West. Three players from the Green and White were selected on offence, one was picked on special teams and four were selected on defence.

The West Division all-stars were selected by members of the Football Reporters of Canada (FRC) and CFL head coaches.

After being pressed into action in the first game of the 2019 season, Cody Fajardo took the ball and ran with it – quite literally – leading the Roughriders to a 13-5 record and first place in the West Division for the first time since 2009. The first-year starter led the league with 4,302 passing yards. Fajardo threw for 18 touchdowns in 2019 and added an additional 611 rushing yards and 10 touchdowns.  He was named a Top Performer of the Week in weeks three, eight and 20. He is the Roughriders 2019 nominee for Most Outstanding Player.

Registering 72 receptions for 1,334 receiving yards and five touchdowns, Shaq Evans had an incredible 2019 season. Evans is a master at the 50/50 ball and is a threat every time he steps on the field, earning more than 100 yards receiving in six games this season including a 193-yard game against Winnipeg. He led the CFL in average yards per catch at 18.6 and in 30+ yard receptions with 15.  Evans was named Top Performer of the Week in weeks six and 17.

Clark has been a veteran leader for the Riders this season, supporting his teammates on and off the field. A stalwart on an offensive line that saw many changes due to injury, Clark anchored a fierce group that allowed just 37 sacks. The offensive line also opened holes for the run game, which averaged 112.8 yards per game for a total of 2,030 yards and a league-high 26 rushing touchdowns. After overcoming injuries from a serious car accident before training camp, Clark went on to play every game this season, including his 100th career game on July 27 against the BC Lions. Clark is the Roughriders 2019 nominee for Most Outstanding Offensive Lineman.

Hughes continued to wreak havoc on CFL quarterbacks this season, amassing a league-leading 16 sacks, while also adding 50 tackles, four forced fumbles and two fumble recoveries – one of which he returned for a touchdown. Hughes was named CFL Top Performer of the Month in July and September and a Top Performer of the Week in week six. He’s ranked eighth among all-time league leaders for sacks with a career total of 130. This is Hughes’ eighth time as a West Division All-Star after being named in 2010, 2012, 2013, 2015, 2016, 2017 and 2018. Hughes is the Roughriders 2019 nominee for Most Outstanding Defensive Player.

Solomon Elimimian played in his 10th CFL season and shows no signs of stopping after an impressive 2019 regular season campaign. Despite being sidelined by an injury for the first three games, Elimimian finished the year third in the league with 88 defensive tackles and also added four sacks and one forced fumble. He was a veteran presence to a linebacker corps that includes the Roughriders’ Most Outstanding Canadian Cameron Judge and fellow all-star Derrick Moncrief. This is Elimimian’s sixth time as a West Division All-Star after previously being named in 2011, 2013, 2014, 2016 and 2017.

Moncrief made 2019 his best season yet. The versatile linebacker recorded a career-high 69 defensive tackles, four special teams tackles, three interceptions, four sacks, and one forced fumble. Moncrief played his best game of the season against the rival Winnipeg Blue Bombers making six defensive tackles, one quarterback sack and one interception during the Labour Day Classic.

Edem collected 69 tackles, seven special teams tackles, three sacks and one forced fumble, knocking out the best season in his career. He played in his 100th CFL game on August 1. Edem made a big impact on defence during week 18’s match up against the B.C. Lions, earning three defensive tackles, two sacks and one forced fumble. Edem was previously a 2013 East Division All-Star as a rookie in Montreal.

After a 12-year hiatus from the CFL, Ryan signed with his hometown Roughriders this year after an incredible career in the NFL with Green Bay Packers and Seattle Seahawks. As a Rider, he played in all 18 games this season making 107 punts for 5,222 yards and a 48.8 yards per punt average. Ryan’s longest punt this season spanned a whopping 77 yards and he placed nine punts inside the opponents 10-yard line. He was named a CFL West Division All-Star in 2005 when he played for the Winnipeg Blue Bombers.  Ryan is the Roughriders 2019 nominee for Most Outstanding Special Teams Player.