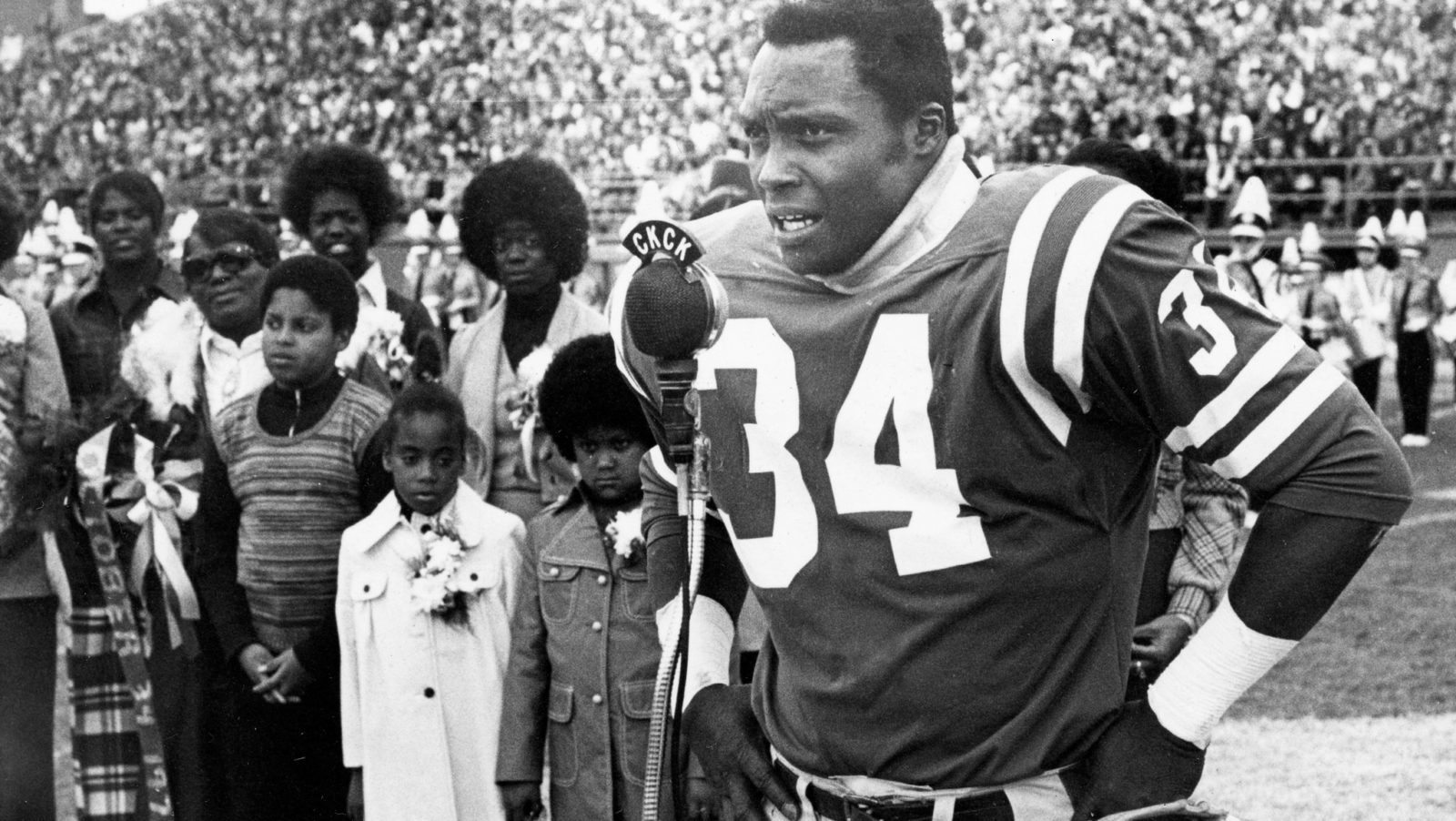 If you wanted it to be, the case for George Reed’s greatness and his place in Saskatchewan could be an open-and-shut deal.

On Taylor Field in Regina and on football fields across this country, Reed established himself as the best running back to ever play in the CFL. The numbers tell you that much. A 13-year career (1963 to 1975), all of it played with the Roughriders. Retiring as the game’s all-time leading rusher (16,116 yards). A record of 134 career rushing touchdowns that still stands today.

Reed also played a key part in bringing the Riders their first Grey Cup in 1966. He rushed for 133 yards and a touchdown in that game and was named the MVP. He was made a member of the Order of Canada in 1978 and went into the Canadian Football Hall of Fame in 1979.

So the statue of him outside of Mosaic Stadium — his quarterback and friend, Ron Lancaster has the other statue — says a lot about Reed the football player.

But as George Reed opened his eyes on Wednesday morning in Regina, looking at the world as an 80-year-old man, his reverence in Saskatchewan is rooted much more in his non-football life.

“Living legend,” Roughriders general manager and VP of football operations Jeremy O’Day said of Reed this past weekend in Toronto.

“People sometimes throw the word ‘legend’ around too often,” Riders president and CEO Craig Reynolds said as his team readied to kick off against the Argonauts.

“But that’s really how George is, he’s literally a living legend.” 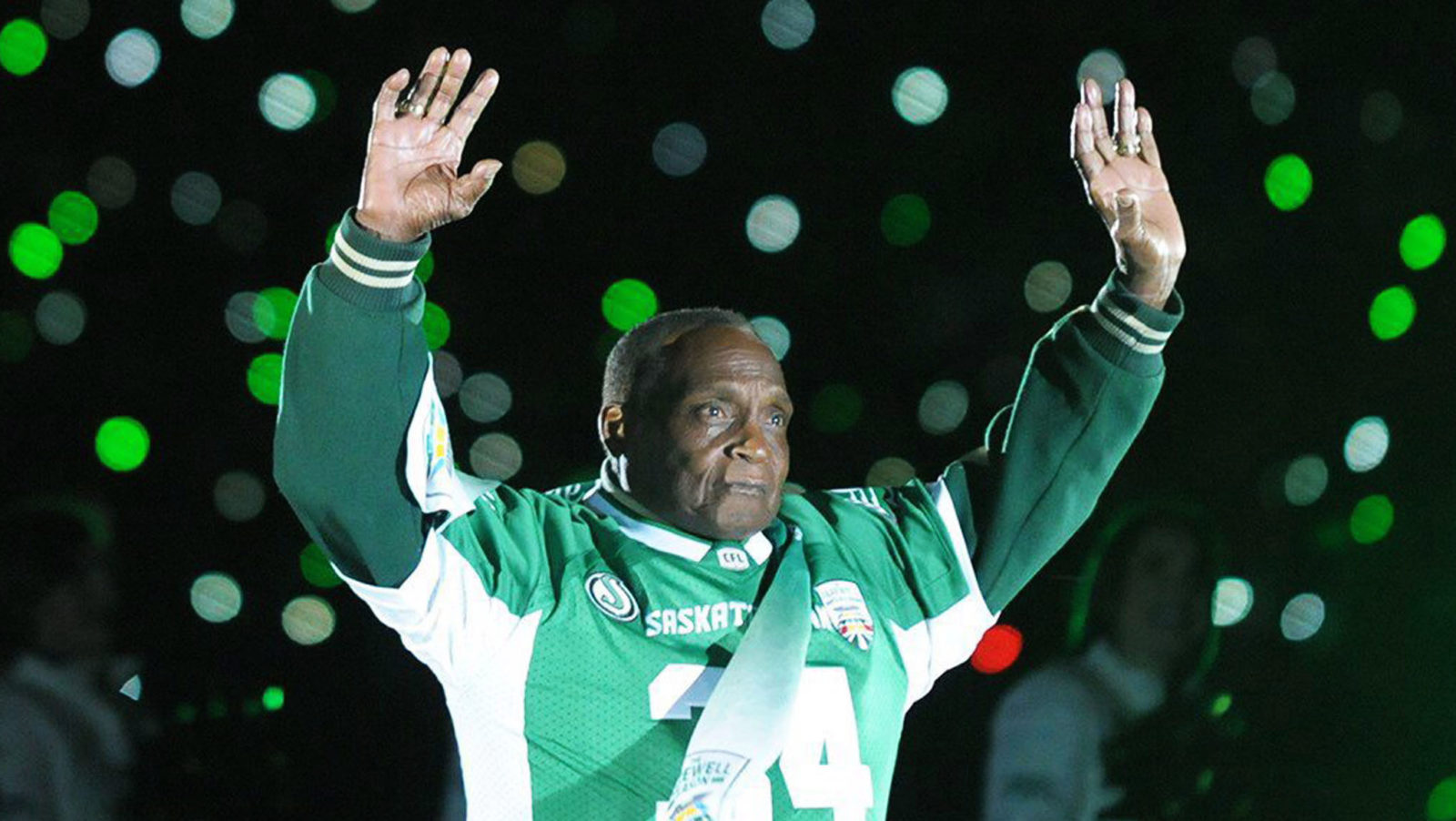 In a league that’s handed out the Grey Cup 106 times, an impressive list of all-time greats is an inevitability. There’s something different about being great in Saskatchewan, though. There’s an unmatched passion from the fans that’s paired with the ultimate reward being very hard to come by. The Riders sit at four Grey Cup wins in their 109-year history. That makes greatness and victory seem to be held in a higher regard in Saskatchewan than it is anywhere else in the country.

“I can’t think of many times, if ever, outside of a concert or something when the headline act walks in and people stand up and cheer,” Regina Leader-Post columnist Rob Vanstone said of Reed.

“I can’t think of many times — of any times — when someone’s elicited a standing ovation just by walking into a room. And I’ve seen that with George Reed.

“Nobody introduces him. He just walks in and as soon as people see him everybody stops. Everybody stands, everybody applauds.”

Vanstone describes his eight-year-old self as “the worst hockey player ever.”

Like many kids growing up in Regina at the time, he went to the Hicke brothers’ hockey school. Brothers Bill and Ernie played in the NHL and hosted camps in their hometown in the summers.

He brought his autograph book, thinking he’d get some NHL players at the school to sign it for him. When he got to the arena, he looked into an office and saw Reed sitting, hanging out with friends. It was 1972. Reed wasn’t yet 33.

“I remember my mom almost kicking me trying to make me go into the room and meet him and get his autograph. I’ll never forget that,” Vanstone said.

“He was just so nice and so gracious. And I was absolutely terrified. Eight-years old growing up in Regina…that’s Ronnie (Lancaster), that’s George (Reed). Those are THE football cards to get when you’re trading cards on the playground. In Regina, they were as big as big could be.

“To walk into that room as this really lousy goalie; such a lousy goalie that they moved me to forward by the time the hockey school was over,” Vanstone laughed. 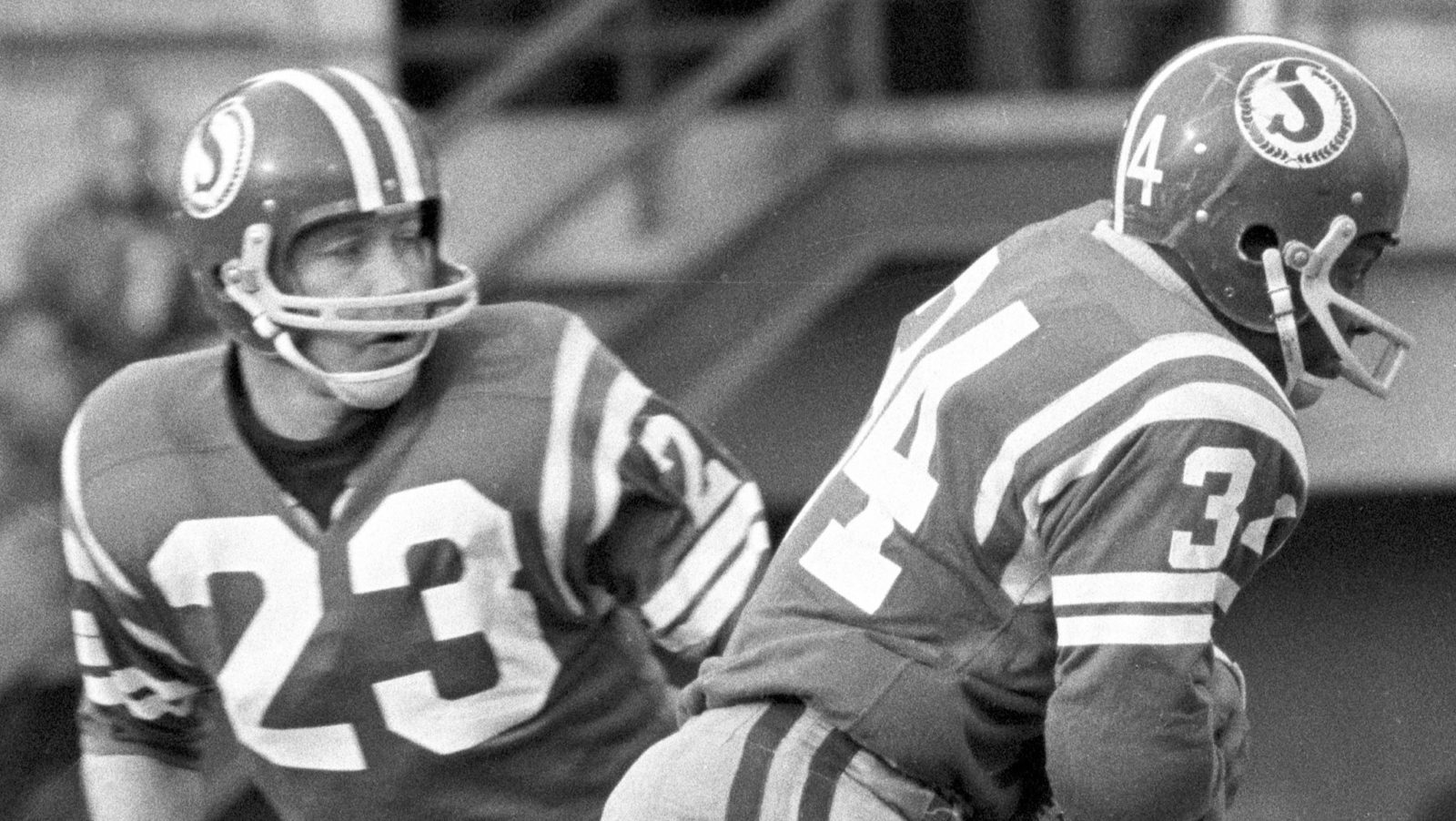 Reynolds grew up in Foam Lake, about a two-hour drive from Regina. He learned of Reed through his father.

“My dad revered him and spoke about him so glowingly,” Reynolds said.

“I still remember the ’09 Grey Cup in Calgary. I was fortunate to have my dad come with me to that game. He saw George from a distance and he was just starstruck and I think that’s how people are which George. You’re starstruck. I had the same moment when I started with the club.

“We were dealing with something from a community perspective and I remember thinking to myself, ‘I’m talking with George Reed right now.’ It was one of those pinch-me moments.”

O’Day took a different path to the Riders and in turn, getting to know Reed.

The Buffalo, N.Y. native came to Saskatchewan in 1999 to play offensive line for the Riders after spending two years in Toronto. He played for them from ’99 until 2010. He moved into football ops with the club in 2011 and secured his present role in January of this year.

“It doesn’t take you long to learn about (Reed),” O’Day said.

“I’m kind of a stats guy. I’m a guy that read up on the history of the team (early on). You look back, you see who the greats were but before we had the new stadium with the statue, he was still very relevant around our guys, just knowing who he is. It’s kind of hard to get past the amount of yards he rushed for.”

Aside from the statues out front, the Riders made a point of building their history into their new stadium. There’s a tribute to Reed on the wall of one of the meeting rooms, complete with his accomplishments. O’Day said the intent is to inform and inspire the current players.

“Our main goal was to motivate the players to want to be on that wall. When you walk in there as a running back, to look up to that wall you say, ‘I don’t have a chance,’” he laughed.

“It kind of does the opposite.”

If the fan-player relationship is special in Saskatchewan, Reed helped take it to the next level by loving the province back.

“What’s really endeared him to people here is the way he’s connected with people for so long,” Vanstone said.

“At one time during his playing career he was involved with 47 different charitable or community groups at once. It’s crazy.

“That was in addition to being president of the CFL Players’ Association, working full-time for Molson and being the greatest running back in the history of the Canadian Football League.

“It’s amazing when you consider the demands on his time and how patient he is with everybody. I don’t know how many hours in a day logically, that all should consume. I think it should be more than 24.”

Reed always found a way to make it work. And while a mutual love affair blossomed over his time in Regina, it didn’t start out that way. Reed told CBC Regina in 2015 that it took him most of his first two years in the city to find a place to live.

“It took me a long while to try to find an apartment that people would rent to me — that type of thing,” he said.

“I would answer an ad in the paper and then I guess when they saw my face, it was a shock, I guess. I didn’t know I was that ugly. I was a shock to them and all of a sudden the place had been rented.”

Reed stayed in hotels those first two years and debated not returning for his third year.

“I often say that sometimes awards overcome colour,” he told CBC. “Then I started working with Molson and I was getting around different parts of the province. And started talking to people.

Eventually, Reed immersed himself in the community. His job with Molson took him to Calgary for 25 years but he and his wife, Angie, returned to Regina in 2009. While working for the Saskatchewan Gaming Corporation upon his return, his charitable spirit and openness hasn’t lessened in his post-playing days.

“The first time I asked him to sign autographs for a fundraiser that I did, it was for Raise a Reader, our literacy program,” Vanstone recalled.

“I asked George if he could spare an hour to sign autographs. And he said…‘No.’ And then there was silence on the end of phone. I think he could hear me gurgling on the end of the line. He goes, ‘No.’ Then he said, ‘I’ll do two hours.’ And he stayed for two and a half.”

***
Does it feel strange, in a way, I asked all three of these people who have spent significant portions of their lives around a legendary athlete, to think of George Reed at 80?

“George has been there for a long time but it doesn’t seem like it’s been that long.

“I know that it’s great. I’ve been trying to see him all the time. Every time you get to spend time with him you just get excited to see him. He’s just a great guy, real down to earth and one of the best to play the game.”

“I don’t think it’s weird, but it is a major milestone,” Reynolds said.

“People sometimes throw the word ‘legend’ around too often, but that’s really how George is, he’s literally a living legend.”

People come to define eras for us in broad strokes, whether they’re athletes, entertainers or politicians. They live publicly in that moment and in turn they age publicly, even if it sometimes feels like it’s impossible that that much time has passed.

“It’s hard to wrap my head around that number,” Vanstone said.

“You watch your heroes (get older) and sadly, we lost Ronnie (Lancaster) in 2008 and he was almost 70 years old. That entire day I was writing with tears in my eyes.

“To be able to appreciate George Reed at 80, to have been able to get to know him reasonably well over the last 10 years…I think what an honor that has been, just to be in their presence a bit brings back so many things. I find I’m often speechless in front of them.

“There’s so much that comes to mind when you’re in the presence of someone who’s meant so much to you as a kid, as someone who grew up here as a sports fan.”

There’s a feeling from Regina that they want to pay proper tribute to Reed, for hitting this milestone, for doing so much for the community, for bringing the Riders their first Grey Cup, for being loved by Saskatchewan and loving it back. Vanstone wrote a surprise happy birthday column for Reed. The Riders have plans to celebrate him on his birthday and beyond. He’s already a fixture at home games, sitting in that new stadium where his statue stands outside. Wednesday and beyond are opportunities to say thanks and to let him know he’s appreciated.

“I’m 55 now. I don’t know how I went from being the eight-year-old who met George Reed to being 55,” Vanstone said.

“You can kind of feel that odometer moving a little too quickly. With that in mind you have to appreciate the people who really mean a ton to you while you have that opportunity. Not just with heroes but with parents and loved ones.

“And who’s meant more to Saskatchewan or the Canadian Football League than George Reed?

“What a nice, generous man he is. In addition to being a legend.”