Jim Hopson to be inducted into Canadian Football Hall of Fame 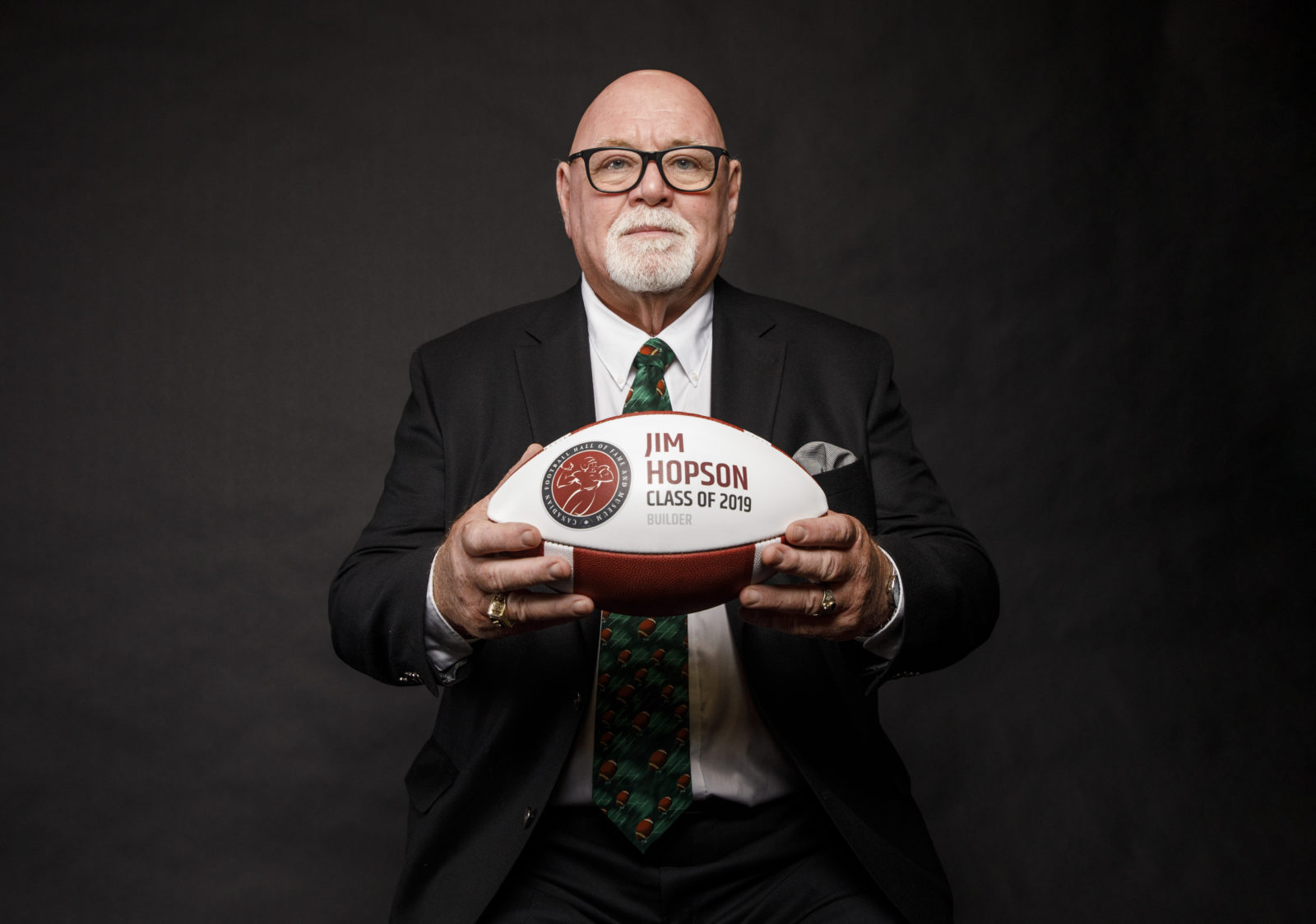 Jim Hopson to be inducted into Canadian Football Hall of Fame

It’s the kind of thing you don’t imagine happening going in.

But on Friday night, it’s happening for Jim Hopson.

The former President and CEO of the Saskatchewan Roughriders will be inducted into the Canadian Football Hall of Fame as a builder.

A fitting category for the man that ushered in the building of new Mosaic Stadium.

So, it may be surprising to hear that it’s not that big beautiful building on Elphinstone Street, but a change in attitude that Hopson considers his greatest accomplishment.

“I wanted our fans to say it wasn’t good enough just to have a team,” said Hopson, who sat in the president’s chair from 2005-2015 after serving as the alumni rep on the Board of Directors.

When Hopson stepped in in 2005 to become the Club’s first President and CEO, the Roughriders had not hosted a home playoff game in 19 years and had only won two Grey Cups in its nearly 100-year history.

Hopson wanted the fans, the team, the organization and the whole province to expect better from the Green and White and he took the steps to make that happen.

It didn’t come easy, though. Hopson had to make the difficult decision in 2006 to fire head coach Danny Barrett and general manager Roy Shivers to help the team take the next steps.

He admitted to some hesitation when Tillman brought on Austin – who didn’t leave the Club under the best terms as a player – but the decision was a shrewd one as the Roughriders headed to Toronto that season to win their first Grey Cup in 18 years and the third in franchise history.

“Thank goodness (it) worked out because I was under no illusions if I fire Roy and we lay an egg in (2007) and not become the team we turned out to be I was the next one out the door. I accepted that, that went with the territory but … things just kept getting better and better for us.”

Under Hopson’s guidance in the years that followed, the Roughriders’ business operations excelled and achieved record profits. The Club was recognized with Paragon Awards for both marketing and community involvement, named one of Saskatchewan’s Top 100 companies, selected as one of Saskatchewan’s Top 20 Employers, was a regional winner for Most Admired Corporate Culture and an Honorary ABEX Award winner.

Hopson said he believed that 2013 championship to be the greatest of all the Grey Cups, but it’s the ones that got away that he thinks about the most: 2009 and 2010 and even 1976 – the one he played in as a player.

“(Former Head Coach) Kenny Miller always said that. ‘You don’t think about the victories and the great wins. You think about the ones that got away’ and it’s true, it’s human nature I think.”

However, those two great Grey Cup wins under his tenure will be on full display Friday as Hopson takes his place in the Canadian Football Hall of Fame – he’ll be wearing his rings to the ceremony.

Hopson was in Mexico when he found out he was going to be inducted. His first call? To his 87-year-old mother, Mabel, who will be there to cheer on her son.

“She’s the hub of the wheel in our family so she’s pretty excited. She still keeps me in line. I’m 68 years old and my mother is still not afraid to tune me in if I get too big for my britches, as she likes to say,” Hopson laughed.

Hopson will be introduced by fellow member of Canadian Football Hall of Fame and CFL star, Russ Jackson, which is one of the things, he said, that really makes his induction surreal.

“I grew up thinking Russ Jackson – Ronny Lancaster and Russ Jackson – they were icons. They are icons and they were the heroes of my high school football days. So here I am going into the Hall with people like Russ Jackson,” Hopson said.

“You know, I’m still a kid from North Central Regina and grew up in the shadows of old Taylor Field and so there’s lots of days I think ‘it’s crazy how life has worked out.’ If somebody had told me 50 years ago when I was coming out of Thom Collegiate that this would all happen, I mean, no way, no way.”