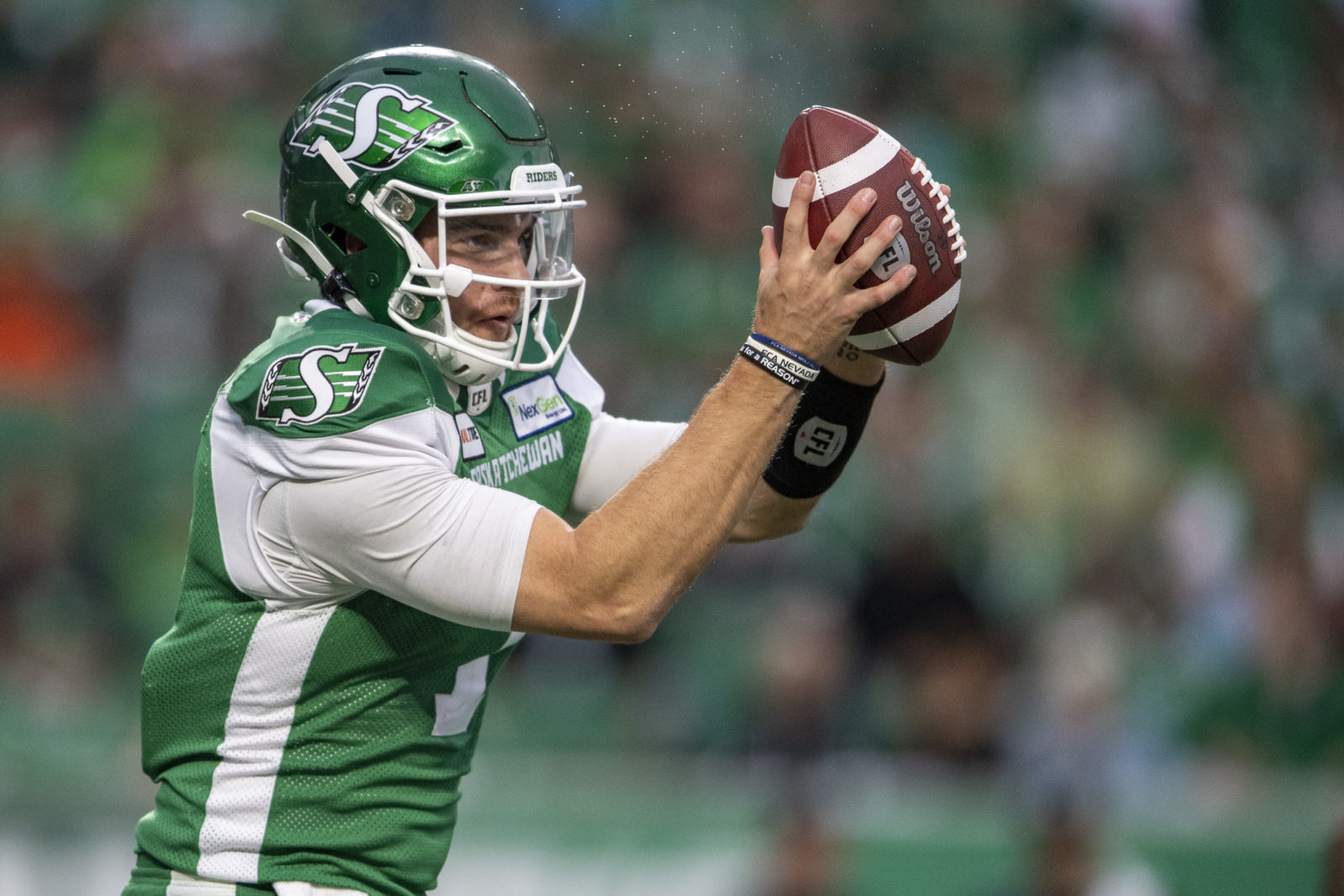 REGINA — Cody Fajardo led the Saskatchewan Roughriders to a 32-7 Canada Day victory over the Toronto Argonauts on Monday, with the quarterback accounting for a career-best 430 passing yards and three total touchdowns. The Riders excelled on both sides of the ball to grab their first win of the season in the home opener.

Fajardo put the Riders up early and had a huge first half with 293 passing yards, two touchdown passes and a rushing touchdown.

Riders receiver Kyran Moore contributed another big performance by reeling in four passes for 127 yards, including an incredible 98-yard touchdown. Shaq Evans also stretched the field for the Riders and caught five passes for 112 yards.

Running back William Powell provided valuable yardage for Saskatchewan, accumulating 112 total yards on the ground and in the air.

James Franklin was up against a strong defensive showing from the Riders and finished with 224 yards and a touchdown on 20 completions before leaving with an injury in the fourth quarter. Franklin also added 34 rushing yards.

Saskatchewan’s defence got to the Argos’ quarterbacks for four sacks and two interceptions, with defensive end Charleston Hughes notching two sacks for the second straight game. 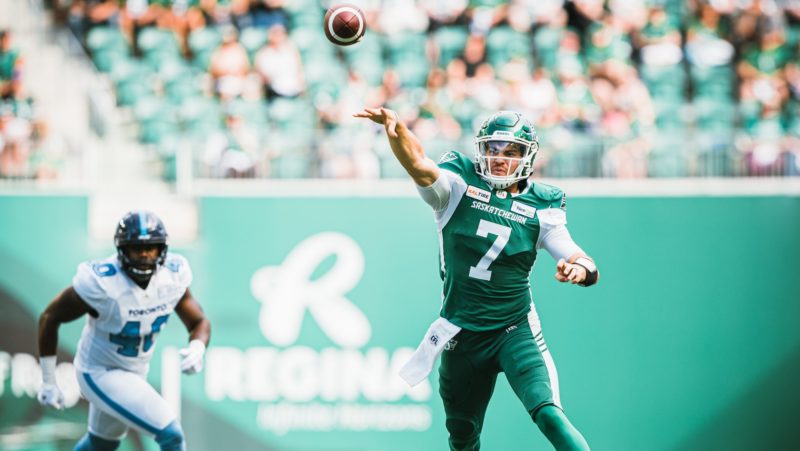 The Riders had a big play right off the bat when Christion Jones returned the opening kickoff 43 yards up the middle to give Fajardo and the offence solid field position. Fajardo then fired completions to Evans and Cory Watson for consecutive first downs, but the Argos’ defence stood strong and forced Saskatchewan to settle for a short field goal. Brett Lauther knocked the 2o-yard kick through the uprights to put the Riders up early. Lauther added a 33-yard field goal soon after to extend Saskatchewan’s first quarter lead.

The Argos then began to move the ball on offence until Riders linebacker Derrick Moncrief made a strong play to intercept a Franklin pass over the middle. The play was the first interception for the Riders’ defence this season. Fajardo then continued to look sharp passing the ball and did not waste time capitalizing on the Toronto turnover.

The Saskatchewan quarterback showed exceptional touch and accuracy to find Moore for an incredible 98-yard touchdown strike. Fajardo placed the ball perfectly over Moore’s shoulder as the receiver streaked down the field, and Moore took the ball 40 yards after the catch to find paydirt. The play was the longest completion for Saskatchewan since the 2002 season. Lauther added the convert kick to put Saskatchewan up 13-0 heading into the second quarter.

Saskatchewan kept things rolling on both sides of the ball with stingy defensive play and an effective passing game. Receiver Naaman Roosevelt hauled in a 33-yard pass from Fajardo on a jump ball down the right side of the field against defensive back Caleb Ham, and Watson then took a short pass and made a move to break a tackle and get across the goal line for the score. But the ensuing two-point convert attempt was shut down with Argos defensive back Abdul Kanneh in tight coverage against Roosevelt.

Fajardo led another impressive scoring drive just before halftime, completing a deep 42-yard pass to Evans and capping off the drive with a one-yard quarterback sneak rushing touchdown. Powell also helped set up the score with 14 rushing yards and an 18-yard catch-and-run on the drive. Lauther added the extra point after a lengthy weather delay due to thunder and lightning.

The Argos looked like a different team after the delay, with Franklin stepping up under pressure while taking a hit to complete a 56-yard bomb to receiver Derel Walker. Running back James Wilder Jr. followed up the big play with a 14-yard catch-and-run, and Franklin put the Argos on the board with a 12-yard touchdown pass to receiver Llevi Noel. Drew Brown kicked the extra point to make the score 26-7. Toronto went 92 yards in just over a minute.

Fajardo responded by leading the Riders on another scoring drive, this time ending with a 21-yard field goal from Lauther after Fajardo drove the team down the field with throws to receivers K.D. Cannon and Evans. Powell also chipped in 21 yards on the drive.

Franklin was leading another promising drive in the fourth quarter until he was intercepted by defensive back Nick Marshall in the end zone while trying to get a deep touchdown pass to receiver S.J. Green. Lauther later added a 45-yard field goal to put the Riders up 32-7 with 10 minutes to play.

Franklin left the game due to injury after taking a sack from Hughes with five and a half minutes to go. McLeod Bethel-Thompson came in to replace Franklin under centre for Toronto, but the Riders remained in control to walk away with their first win.

Both teams will be in action again this Saturday night, with the Toronto Argonauts hosting the BC Lions and the Saskatchewan Roughriders hosting the Calgary Stampeders.