The Roughriders’ season comes to an end 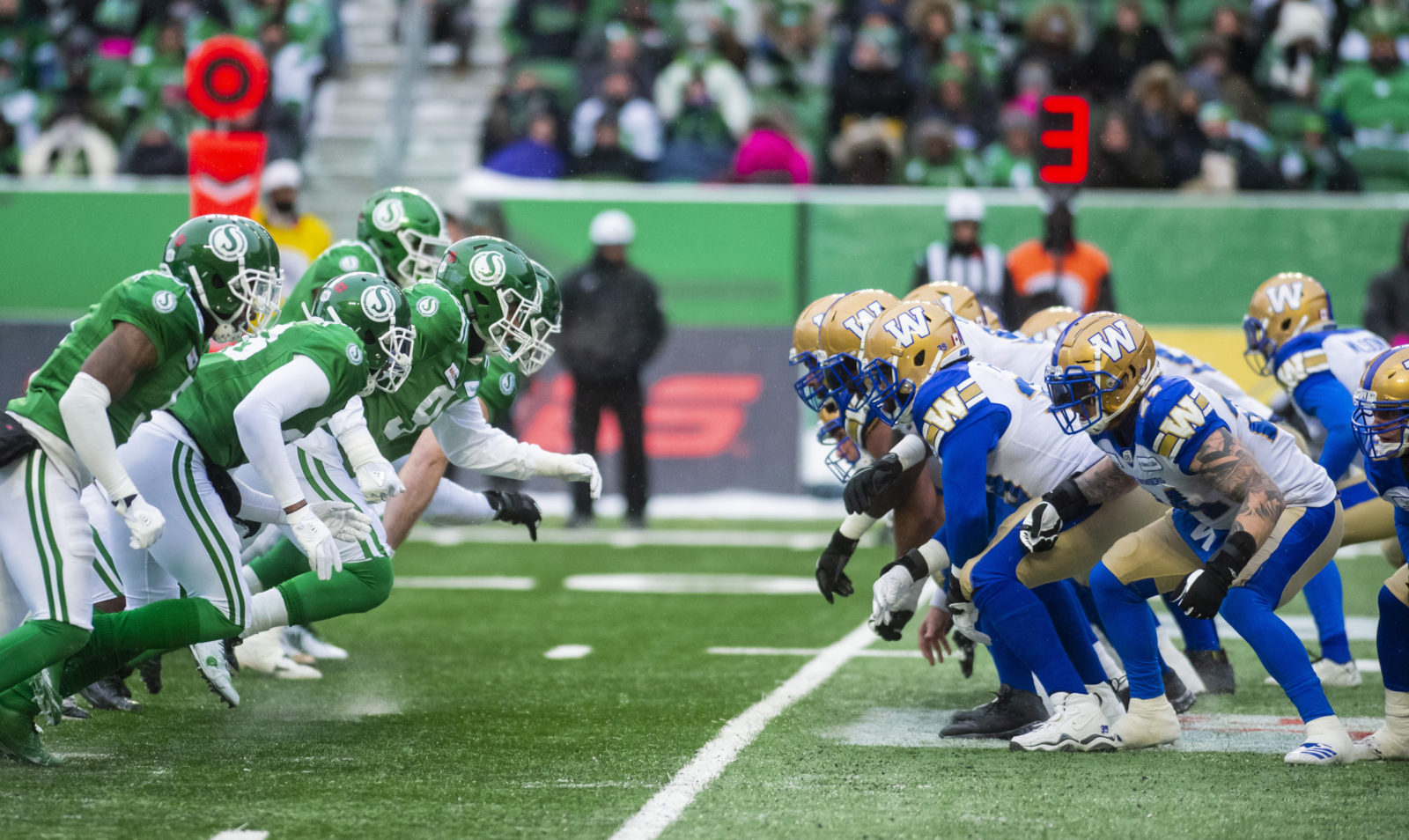 The Roughriders’ season comes to an end

Thaddeus Coleman smacked one beefy hand into the palm of the other Sunday as he reflected on the end of his 2018 season.

“I’m sick to my stomach right now,” the Saskatchewan Roughriders’ offensive tackle said after his team’s 23-18 loss to the Winnipeg Blue Bombers in the CFL’s Western Semi-Final at Mosaic Stadium. “I’m 33; I’m not a young cat. I need to win now. This actually really hurts. We had the opportunity. We had a great team this year and it sucks losing like that.

“Everybody’s going to be mad at the referees for not calling the late hit (on quarterback Brandon Bridge with eight seconds left in the fourth quarter). No. It shouldn’t have come down to that. It can’t come down to the last two plays. We’re a great team and we should have put them away in the first half.”

The Roughriders finished second in the West Division standings in the regular season, earning home-field advantage in the first round of the playoffs against the third-place Bombers. 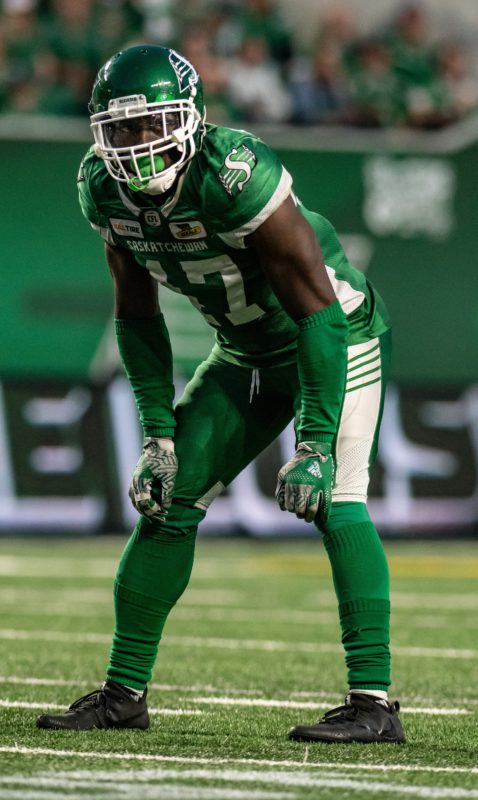 The last time Winnipeg won a playoff game in Regina was Nov. 5, 1955, when it posted a 16-7 victory over the Roughriders in the first game of a two-game total-point divisional semifinal. Sixty-three years later, that drought ended — much to the dismay of the Roughriders.

“(The season) is just … unfinished,” linebacker Sam Eguavoen said, pausing to find the right word. “It’s the worst time to not click in the year. It’s the playoffs. We stacked our chips all season and, in the playoffs, you’ve got to push them all in. It’s your final bet. You either win or go home.”

As the Roughriders prepare to head home, the Bombers are preparing to visit the Calgary Stampeders in the Western Final on Nov. 18.

With an announced crowd of 30,609 in the stands for the first playoff game at new Mosaic Stadium, the Roughriders should have been suitably motivated Sunday. But Eguavoen said his squad was flat in the first half and couldn’t recover.

“I thought we’d have more juice than that,” he said. “The second half, I feel we played a little bit better even though they did score (10 points). You just can’t start slow against a team like Winnipeg. I feel like they’re the only team in the CFL that want it as bad as we did.”

In the days leading up to the game, the Roughriders gave Bridge first-team reps in practice. That led to speculation about the health of Zach Collaros, who left Saskatchewan’s regular-season finale against the B.C. Lions on Oct. 27 after taking a helmet-to-helmet hit from Lions defensive end Odell Willis.

On Sunday, Collaros was one of the Roughriders’ two scratches, answering that question.

“He just didn’t feel 100 (per cent) and I didn’t want to risk another situation like with Ottawa earlier in the year,” said Roughriders head coach-GM Chris Jones, whose team lost Collaros for four games after he left a contest against the host Redblacks on June 21 with head and neck issues. “It was very similar to that, he said.”

So the Toronto-born Bridge got the nod Sunday, becoming the first Canadian quarterback to start a CFL playoff game since Gerry Dattilio led the Montreal Concordes in the Eastern Semi-Final on Nov. 4, 1984.

With Bridge at the helm, Saskatchewan put up the game’s first six points on field goals of 33 and 16 yards by Brett Lauther. But Winnipeg tied the game on 38- and 36-yard field goals by Justin Medlock.

Late in the second quarter, the Bombers forced the game’s first turnover — and it led to points. Four plays after a Kevin Fogg interception, Matt Nichols hit Drew Wolitarsky with a 20-yard touchdown pass that Medlock converted. 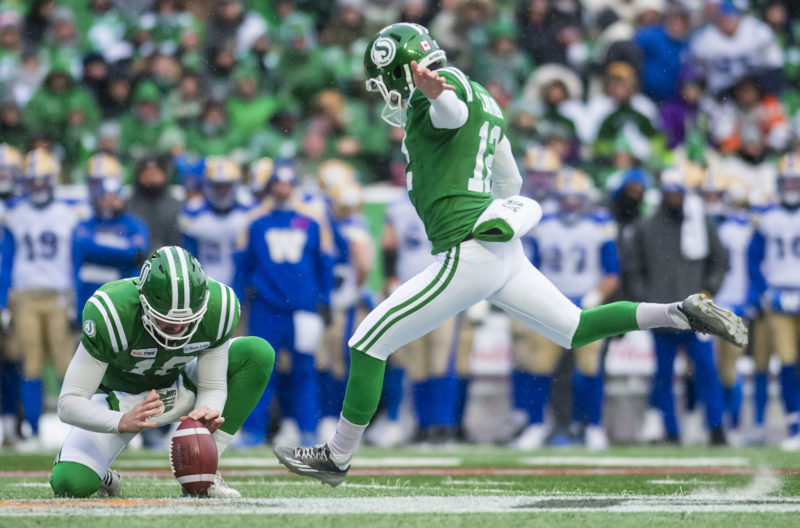 Lauther kicked a 34-yard field goal at 13:12 of the second quarter and a 27-yarder at 13:28 of the third quarter, but the Bombers stretched the lead with a 30-yard three-pointer from Medlock at 7:22 of the fourth.

The lead grew to 22-12 at 10:10 of the fourth when Andrew Harris recovered his own fumble in the Roughriders’ end zone. Medlock’s convert made it an 11-point game with 4:30 left.

After the ensuing kickoff, Winnipeg burned nearly two minutes off the clock before punting with 40 seconds left in regulation time. After a sack on first down, Bridge was hit high by Bombers defensive end Jackson Jeffcoat on second down — but a penalty wasn’t called.

Jones refused to put Sunday’s loss on the hits to Collaros and Bridge.

“There were a lot of things that we could have done better as a football team,” Jones said. “You can’t take anything away from what they’ve done in Winnipeg. They’ve got a good football team and it’s going to be a tough group to have to beat down the stretch.”

Harris, who had seven carries for 27 yards in the first half, had 12 carries for 126 yards after the break for a 153-yard day. Nichols was 16-for-22 passing for 169 yards and, more importantly for the Bombers, didn’t turn over the ball.

“That’s all we were talking about at halftime: ‘How are we going to get the ball back?’ ” said Eguavoen, who had nine tackles. “(Winnipeg head coach Mike) O’Shea, hats off to him. And Nichols. They really didn’t throw the ball where we could get it.

“They played a conservative game. The run game started working in the fourth and that’s the best way to beat our defence.”

Bridge was 12-for-22 passing for 100 yards and rushed five times for 86 yards. Naaman Roosevelt was the Roughriders’ leading receiver with seven catches for 79 yards.

Like Coleman, Roosevelt said Sunday’s loss hurt because of the Roughriders’ expectations for the season.

“We all thought it was going to be a Grey Cup year,” he said. “That’s what we felt, that’s what we believed and it just didn’t turn out that way.”