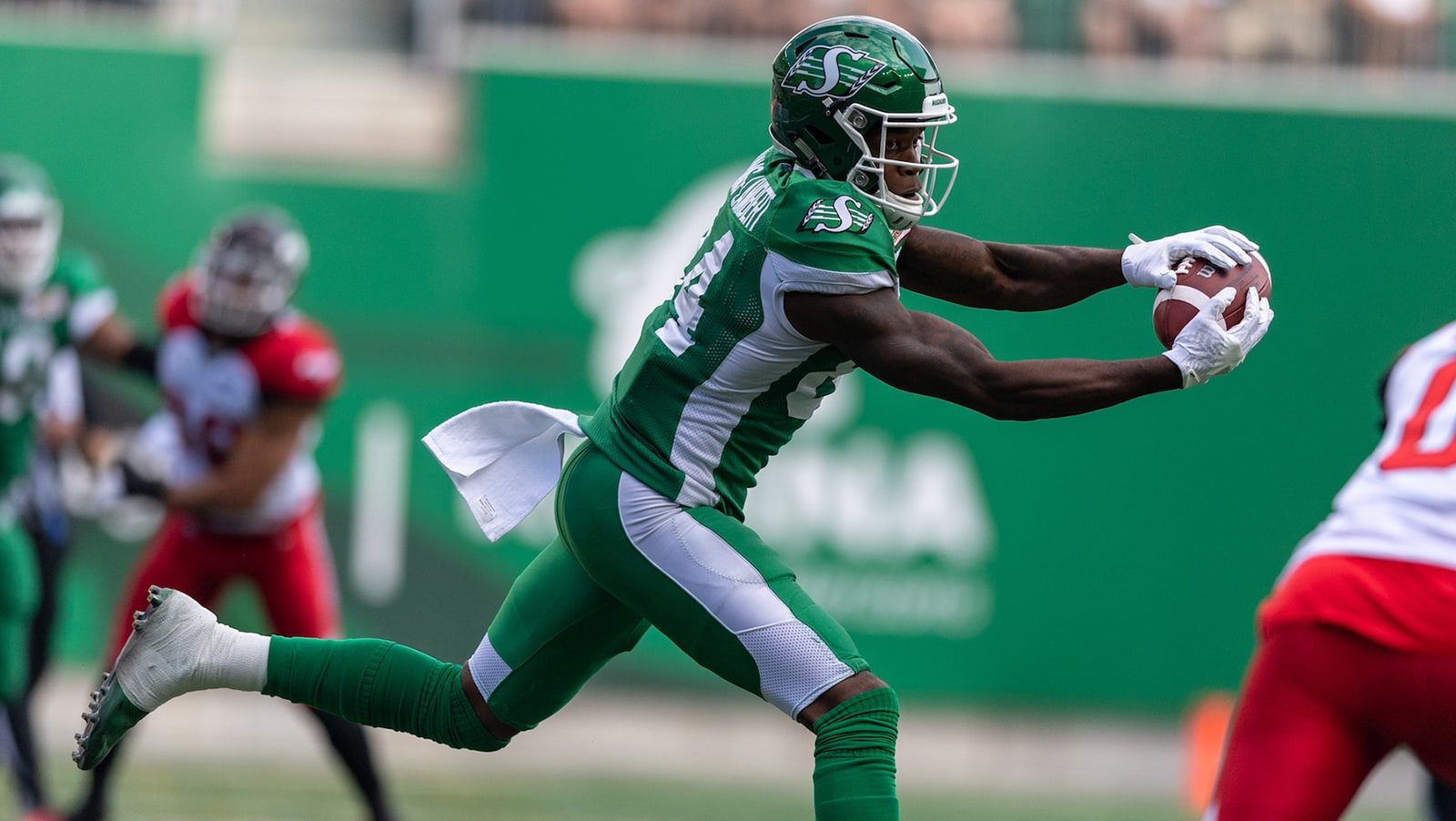 Jordan Williams-Lambert received a major honour Thursday, but he has his eyes on a bigger prize.

The Saskatchewan Roughriders’ slotback was named the West Division’s most outstanding rookie after voting by members of the Football Reporters of Canada and CFL head coaches. He’s to face Ottawa Redblacks kicker Lewis Ward in the final round of balloting for the league-wide award.

“I appreciate the honours, but we’ve got a lot more to achieve as a team,” Williams-Lambert said after Thursday’s closed practice at Mosaic Stadium. “It’s exciting, but I’m really focused on the game.”

That game is Sunday’s Western Semi-Final against the visiting Winnipeg Blue Bombers. The winning team will continue its pursuit of the Grey Cup, while the losing side will head home for the off-season.

Williams-Lambert introduced himself to the Roughriders at an off-season free-agent camp in Akron, Ohio. He earned an invitation to the team’s mini-camp in Bradenton, Fla., and advanced from there to Saskatchewan’s training camp in Saskatoon.

There, the 24-year-old product of Chicago won a starting job in the Roughriders’ receiving corps. He ended up starting 17 regular-season games, recording 764 yards and four touchdowns on a team-high 62 catches.

“A lot of football is done behind the scenes when you’re putting in work and nobody is watching,” Williams-Lambert said. “Now that it’s kind of public, that they’ve seen the things I’ve done and how I’ve capitalized on the opportunity, (people will realize) there has been a lot of work put in — a lot of work people are not going to see.

“While it’s new to a lot of people, it’s kind of an expectation for me because I’ve put in so much work that you would hope to reap the benefits.”

Williams-Lambert shared a house with fellow CFL rookies Shaq Evans and Kyran Moore this season and the trio kept each other motivated during their first year in Saskatchewan.

“Being rookies, you’ve got to work together to try to overcome a lot of the barriers they have against you and I think we did that,” Williams-Lambert said. “I think it showed all season and it has really been a blessing. 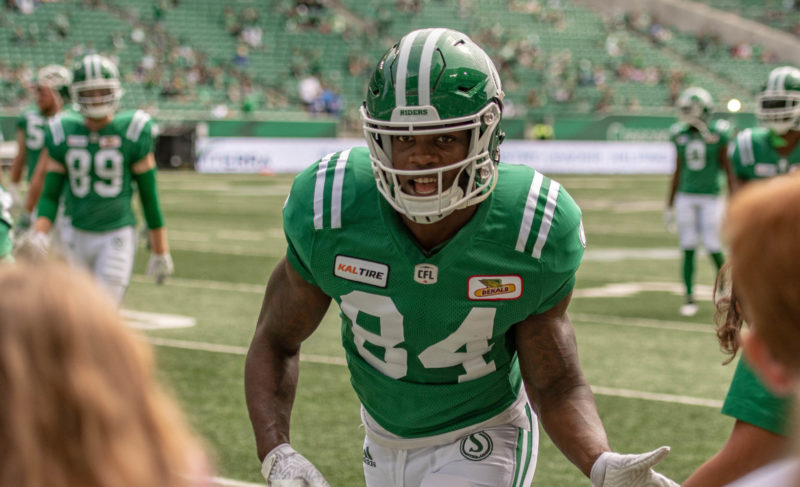 “I thank the coaches for blessing us with the opportunity because not all rookies get an opportunity to play their first year. They trusted us with that opportunity and we took it and ran with it.”

As he tries to become the Roughriders’ first CFL rookie-of-the-year since Weston Dressler in 2008, Williams-Lambert faces a tough challenger in Ward. The Redblacks’ kicker went 51-for-52 on field-goal tries to set a CFL single-season percentage record and also made a record-setting 47 straight kicks.

The winners will be announced Nov. 22 during Grey Cup Week in Edmonton.

Saskatchewan head coach-GM Chris Jones was named the West Division’s coach of the year for the third time in his career. This time, he’ll face off against Ottawa’s Rick Campbell for the CFL award in the final round of voting. 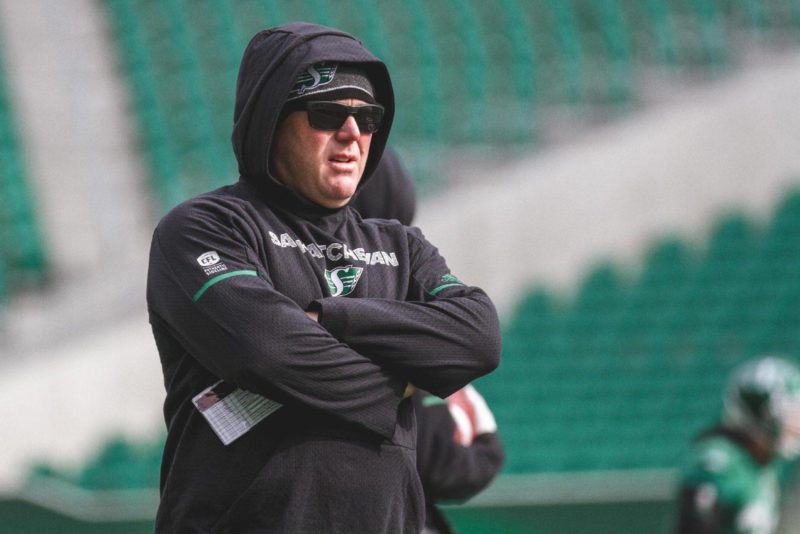 “It’s an honour,” Jones said, “but at the same time it’s a voted-on award and it’s not something that I focus on.”

The most-recent Saskatchewan head coach to earn the CFL honour was Corey Chamblin in 2013.

Jones was the West’s nominee for the award in both 2014 and 2015, when he was the head coach of the Edmonton Eskimos. This season, he got the nod after guiding the Roughriders to a 12-6-0 record.

“I’ve had the good fortune of being around some really good folks,” he said. “I’ve got a good staff and good players.”

Campbell steered Ottawa to an 11-7-0 record and first place in the East Division.

He and Jones were on the same staff in Calgary in 2010, when Jones was the Stampeders’ defensive co-ordinator and Campbell was their running backs coach.

Tailback Marcus Thigpen has been the only Roughrider practising with bare arms during this week’s cold snap.

He’ll play that way Sunday, too. 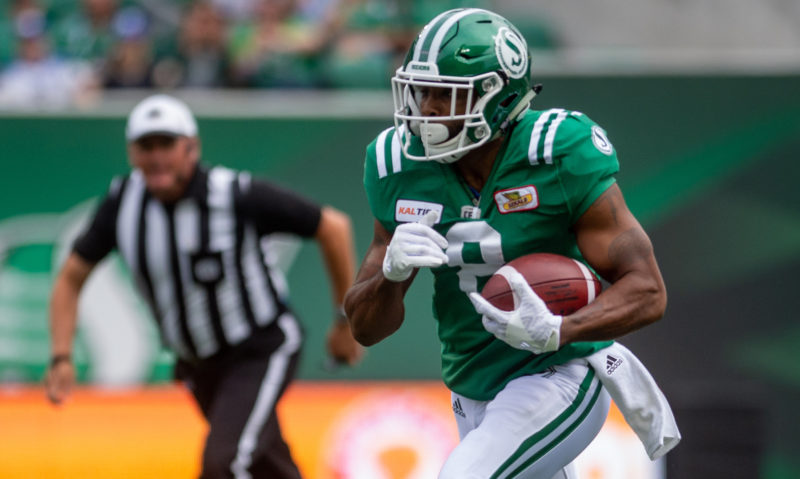 “I feel like it prevents fumbles,” Thigpen said. “Sleeves can be kind of slippery. I wore some in college and I fumbled one time, so I’ve taken them off ever since.”

The forecast for Sunday is calling for a mix of sun and cloud and a high of -9 C. Jones, for his part, couldn’t care less about the game-day forecast.

“I told (the players) this morning, ‘I’m about tired of hearing about the damn weather,’ ” he said. “We’re playing the game.

“It doesn’t matter where we play (the Bombers): The game’s happening and we really don’t care if it’s played here or played somewhere where it’s 100 degrees. It doesn’t matter.”

The contest Sunday will be the first playoff game ever played at new Mosaic Stadium.

The $278-million facility opened prior to the 2017 season, but the Roughriders ended up being the crossover team that competed against East Division teams in the 2017 post-season.

This season, Saskatchewan is in the West for the post-season — and at home to start it.